New round of floods in southern Utah; thunderstorms possible along Wasatch Front
NewsNation/World

DALLAS, Texas — A man who was a key witness in the murder trial of former Dallas police officer Amber Guyger was fatally shot Friday in the parking lot of his apartment complex, according to attorney Lee Merritt.

Joshua Brown was a neighbor of shooting victim Botham Jean, who was sitting in his apartment in September 2018 when Guyger walked inside and shot him to death.

Dallas police responded to a call for a shooting at the Atera Apartments complex around 10:30 p.m. Friday, police told CNN.

Officers were flagged down by witnesses who directed them to Brown, who was lying on the ground of the apartment parking lot with multiple gunshot wounds. He was transported to Parkland memorial hospital, where he died from his injuries, according to a statement from Dallas Police.

Brown had no identification on him, so police couldn’t identify him until the medical examiner made a positive ID and notified the next of kin.

There is no suspect information at this time, police said.

‘He said it could have been him’

Merritt said Brown lived in constant fear of gun violence and that’s why he was emotional on the witness stand during the trial.

“He said it could have been him,” Merritt said.

Guyger, 31, was found guilty of murder a few days ago and given a 10-year sentence. She will first be eligible for parole in five years.

The ex-officer said she mistakenly walked into the wrong apartment in her complex and opened fire because she thought Jean was an intruder.

Brown testified that he met Jean the day he was killed. He said he was down the hall from his apartment when he heard the voices of two people who sounded like they were meeting by “surprise.” The gunshots followed “right after,” he said.

Soon after, from his apartment balcony, Brown said he saw Guyger come out to the hallway from Jean’s apartment on the phone. She was “crying, explaining what happened, what she thought happened, saying she came in to the wrong apartment,” he said.

Through his peep hole, Brown said he also saw the former officer “going back, back and forth on the phone.”

“And then, I think she went back inside, then came back out,” said Brown, who lived across the hallway from Jean.

During testimony, Brown broke down and wiped away tears with his T-shirt. Jean’s family members could be heard crying softly. 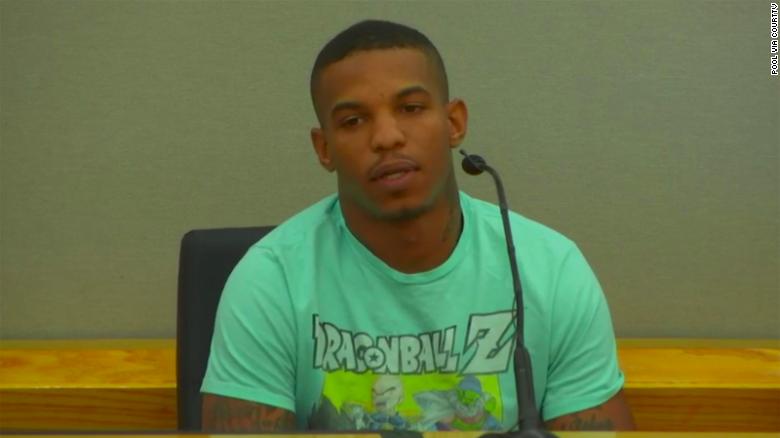