It`s been called the biggest alcohol policy shift in Utah since the end of Prohibition. 3.2 beer is going away to make room for heavier brews, 5% alcohol-by-volume.

SALT LAKE CITY -- It's been called the biggest alcohol policy shift in Utah since the end of Prohibition.

3.2 beer is going away to make room for heavier brews, 4% alcohol-by-weight (more commonly marketed as 5% alcohol-by-volume).

"We’ve been waiting for this for 86 years," Andy Zweber, the president of General Distributing, said in an interview with FOX 13.

At General Distributing's massive warehouse in Salt Lake City's Northwest Quadrant, the 3.2 beer is dwindling and there are rows and rows of pallets filled with 5% beer. Extra staff has been brought in to make sure that on Friday, beer is on the shelves.

That's the day 5% beer can legally be sold in Utah.

"Our guys are putting in a lot of extra time and effort making this transition happen. But in the long run it’s a great change for Utah and the Utah beer industry," Zweber said.

Faced with the total disappearance of 3.2 beer as bigger beer drinking states abandoned it, the Utah State Legislature was forced to move to a higher alcohol content for beer. As a result, what's sold in grocery and convenience stores and offered on tap will be heavier. Utah's state-run liquor stores will get rid of 106 products and they'll compete with the free market.

To commemorate the event, Budweiser's famed Clydesdales are arriving in Salt Lake City and Park City for a 3.2 beer "funeral."

But until Friday, store shelves are emptying out. Listeners of FOX 13 and The Salt Lake Tribune's "Utah Booze News" podcast have been taking photos, documenting the slow death of 3.2 beer in Utah. Normally crammed with cases and cans of beer, shelves have been thinning with entire labels vanishing altogether.

"Short term pain for long-term gain," said Dave Davis of the Utah Retail Merchants Association, which represents many stores across the state.

While many retailers are loathe to have empty shelves, brewers stopped making a "Utah special" beer a long time ago and the product is just disappearing. The legislature recently passed a law change to allow stores to "pre-stage" heavier beer so it wouldn't take stores weeks to stock the heavier beers.

At Harmons Grocery, pallets of the heavier beer is in the back, shrinkwrapped and ready to go on Friday.

FOX 13 was given a list of some of the brands shifting from state-run liquor stores to general retail and new titles moving into Utah. They include:

The heavier beer will be sold in stores starting November 1. Utah Department of Alcoholic Beverage Control director Sal Petilos said anything left on state-run liquor store shelves will be destroyed.

The space reserved for those beers in Utah DABC stores will make room for other product.

"Heavy seltzers. Those are really, really popular," Petilos said. "We’re also looking at other categories, whether or not it makes sense to list distilled products or wines, because they provide the ability to have a greater markup and generate better revenue for the state."

A gallery of empty store shelves: 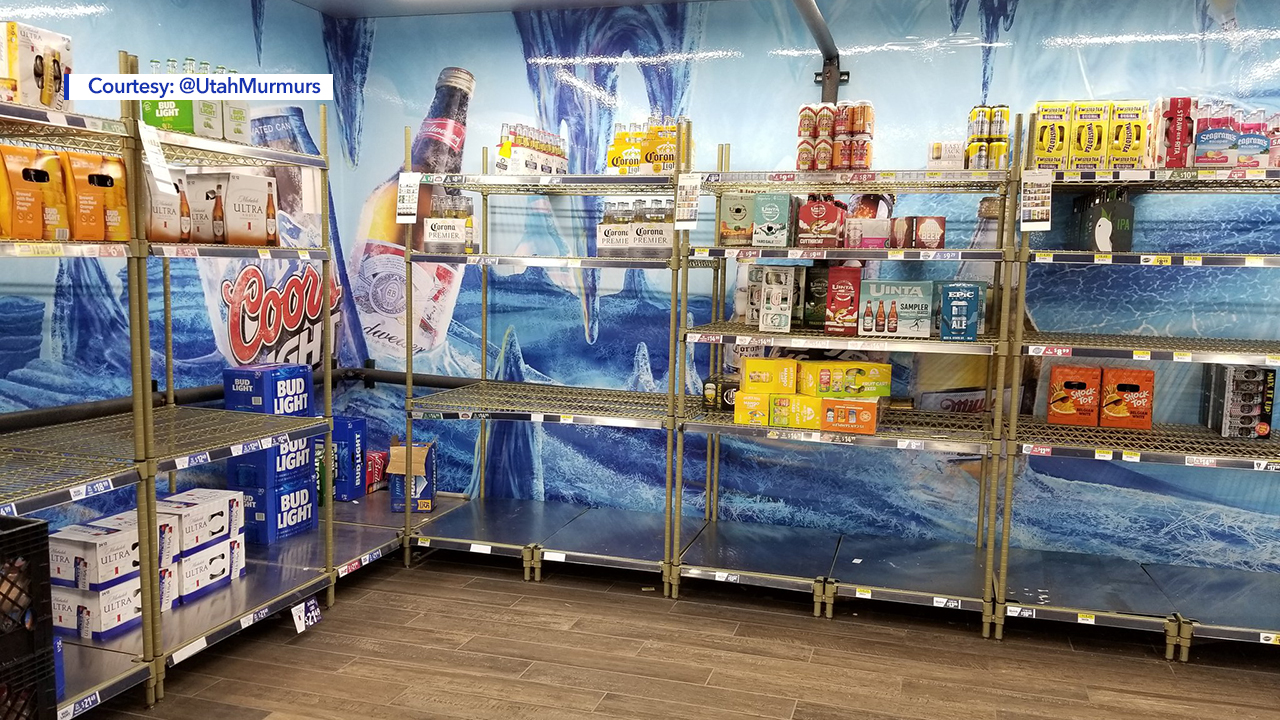