WAYNE COUNTY, Utah — The Wayne County Sheriff’s Office is offering more details about a dog attack after threatening messages were directed at the deputy who put the animal down.

The sheriff’s office posted about the incident on Facebook Tuesday night, saying the dog bit the victim on October 2 while the victim was a guest at a home in Wayne County.

“The dog in question was with another dog in the back of a pickup truck parked in the town right-of-way,” the post states. “The dog did not bark, growl or give any other type of warning.”

The victim suffered “an extremely serious bite” with four puncture wounds. Photos posted by the department show the wounds and major bruising in the area. See the bottom of this story for those images.

The owners agreed to quarantine the animal for 10 days, a precaution to check for rabies, and told the victim they would put the animal down themselves, the post states.

Deputies learned the owners did not do so, and there were several reports of the dog being allowed to go loose after the quarantine period ended.

Deputies tried to contact the owner four different times without success. The fifth attempt came on October 18, and Deputy Brandon Burr made contact and took control of the dog from the owner.

“Deputy Burr stated the dog’s behavior was such that he did not believe he could get it safely into the County kennel,” the post states. “He and I had discussed previously the need and importance of enforcing the County Ordinance (09-07-04-2) and if need be, the dog could be destroyed (paragraph 5) to prevent any future injury to any other citizen of the County. The decision was made to destroy the animal.”

The sheriff’s office states they reviewed the case, as did the county commission, the county attorneys office and Utah Peace Officer Standards and Training. The post states none of those reviews found any violations of policy or statute by the deputy.

The county attorney will determine if charges will be filed for the original dog bite.

The sheriff’s office is investigating comments directed at the deputy in the wake of the incident.

“Wayne County Sheriff’s Office has received copies of various Social Media posts from several people in the community who expressed concern about comments directed toward the Sheriff’s Office and Deputy Burr,” the post states. “An additional investigation will be conducted regarding these threatening comments.”

WARNING: The photos below show a serious wound. Viewer discretion is advised. 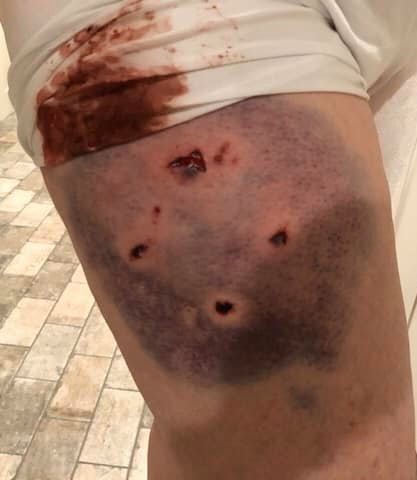