Election 2019: Results of the SLC mayor’s race and more

Several local elections show promising leads for candidates, but it's still far from over.

SALT LAKE CITY -- Erin Mendenhall took the lead in the race against Luz Escamilla to be mayor of Utah's capital city.

But in an interview with FOX 13, Escamilla said she would not concede.

"We know that voting by mail has changed the way we do elections, and like I said, we did such a good job these last four days that we want to wait for those numbers and we remain optimistic," she said.

Salt Lake County Clerk Sherrie Swensen said she expected to release more ballot returns on Thursday and Friday. Those are provisional and ballots dropped off at vote centers on Election Day.

It was not the only major race in Utah.

In North Ogden, just over a year after the death of the late Mayor and Maj. Brent Taylor in Afghanistan, two new candidates are running to take the place of Mayor Brent Chugg, who served as interim mayor when Taylor was deployed and was selected as Taylor's replacement after his death.

Utah was trying a pair of new voting experiments. The Utah County Clerk instituted a mobile voting program for some elections and Vineyard and Payson experimented with ranked-choice voting for their council races.

Ranked-choice, where candidates are decided by voter preference in order from "first to worst," is used in other states but it is the first time it's been done in Utah.

"I know there are several other cities that are watching Payson and Vineyard to see if ranked-choice voting will work for them. There were about seven or eight cities that were interested in it but maybe were a bit timid to pull the trigger and I think they’re going to watch this very closely and see how it goes," said Utah County Clerk Amelia Powers.

In San Juan County, voters were determining whether to begin the process of exploring a change in form of government. It comes after a federal judge ordered a special election last year after finding racial gerrymandering in commission and school board boundaries to disadvantage Native American voters. That led to a Navajo-majority commission.

The ACLU of Utah was monitoring the San Juan County elections as part of a settlement over another issue of Navajo voters not having language assistance with ballots and few polling places across the county.

"With that settlement agreement, we are monitoring the polling locations to make sure that what should be in place, is in place," ACLU of Utah staff attorney Leah Farrell told FOX 13.

One race that has become a nail-biter. Salt Lake City Council Chairman Charlie Luke was behind his challenger, Dan Dugan, by only five votes (Dugan is at 3,413 to Luke's 3,408 votes).

Davis County website appears to still be down. We have asked state tech folks to work with them. Doesn’t appear to be anything malicious.

Other election results can be seen below:

Payson and Vineyard ranked-choice results can be viewed in the gallery below. 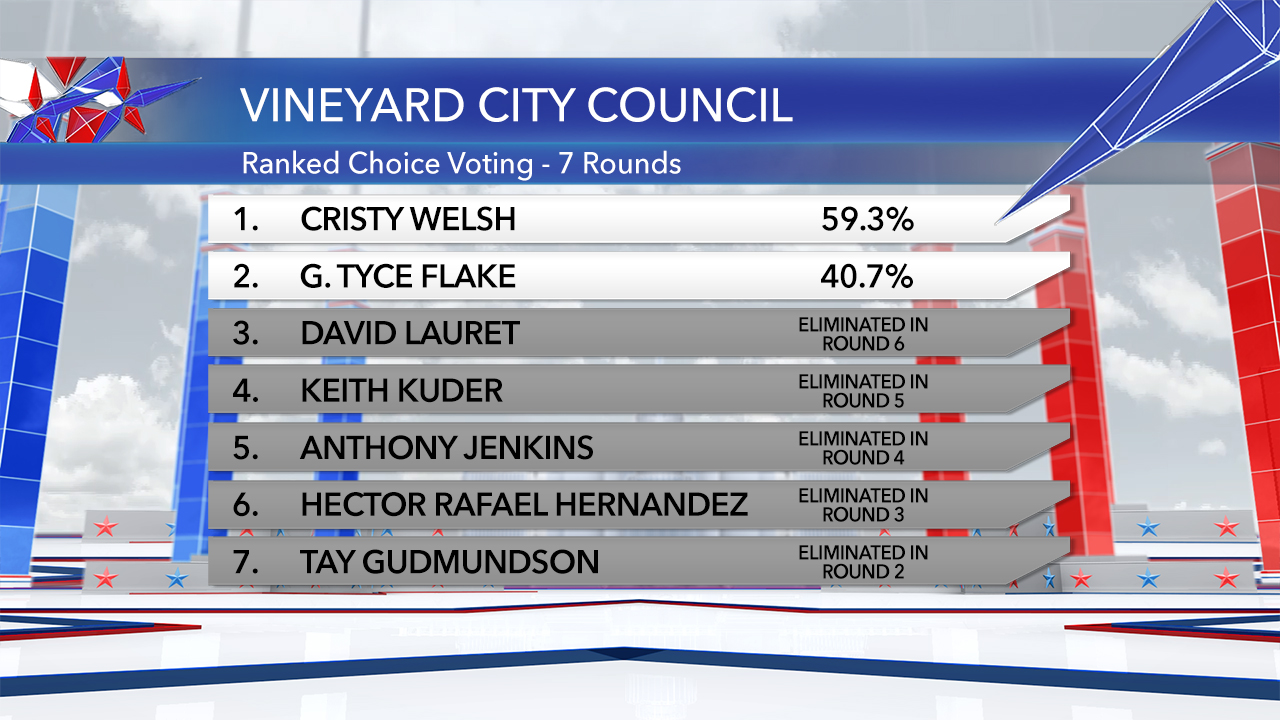