GRAND RAPIDS, Mich. (WOOD) — So often, stories coming out of a courtroom are not happy. Not this one.

A Michigan boy named Michael Clark Jr. had a crowd of supporters at his adoption hearing this week – his kindergarten classmates from Wealthy Elementary in East Grand Rapids. The children held up hearts on sticks to celebrate their classmate’s big day.

Andrea Melvin and Dave Eaton became Michael’s foster parents about a year ago. On Thursday, they became his forever parents.

“We were thinking, ‘How can we build our family?’” Melvin said before her new rambunctious kindergarten-age son cut in.

“I love my Mommy!” Michael said.

“And there’s so many options, right, for building a family these days,” Melvin continued.

“I understand we are joined by Michael’s kindergarten classroom and teacher,” Gardner announced from the bench as Michael’s adoption came up.

The kids may not realize it, but they were part of a special lesson you won’t find in any textbook.

“The lesson is put a little love in your heart. We rise when we support others,” said their teacher, Kerry McKee, who has had an obvious effect on Michael. 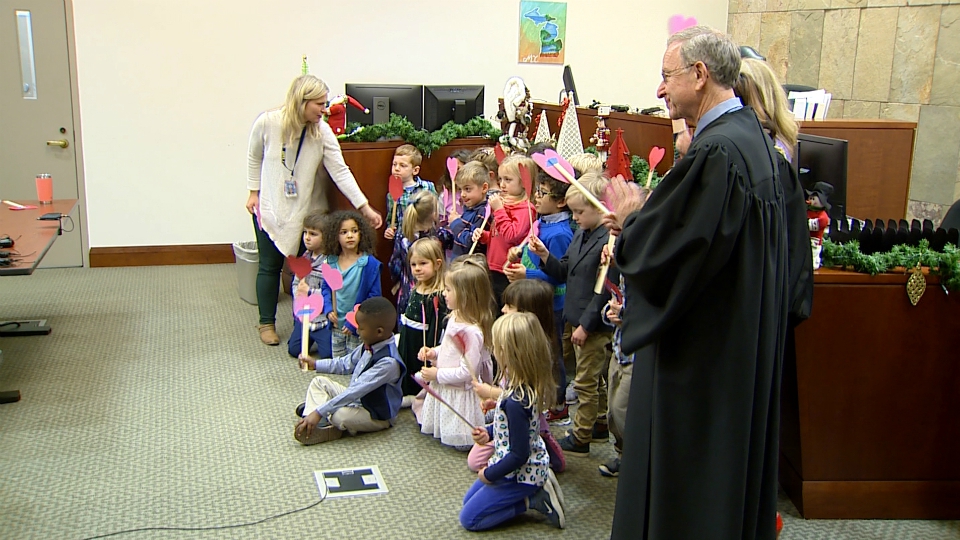 Michael Clark’s classmates joined him in 17th Circuit Court in Grand Rapids as he celebrated his adoption to Andrea Melvin and Dave Eaton. (WOOD-TV)

“He loves Mrs. McKee,” his dad Dave Eaton agreed. “We asked him and he said, ‘You know, the class is kind of my family.’ And he wanted them to be there.”

“Welcome to the courthouse on this amazing day,” 17th Circuit Court Family Division Judge Patricia Gardner as she opened a hearing during the Kent County court’s annual Adoption Day Thursday.

Thirty-seven children, all coming from the foster care system, were adopted. There wasn’t a dry eye in the courthouse.

“That’s so true,” Gardner said. “On Adoption Day, there’s so many emotional stories of how children come to families.”

Usually, adoptions are kept confidential. But on one day a year, they’re celebrated and shared.

So is a message: Right now, between 4,000 and 5,000 children in Michigan are in need of foster care. For Andrea Melvin and Dave Eaton, fostering Michael was a calling.

“If it’s something that’s crossed your mind, you should consider it and get trained and just see what it’s all about,” Melvin said.

If you are interested in learning more about foster care, contact the West Michigan Partnership for Children.