SALT LAKE CITY — Fans, players, coaches and others in the local basketball community are sharing memories and well-wishes of NBA legend Kobe Bryant after he and his 13-year-old daughter Gianna were killed in a helicopter crash in California Sunday morning, along with seven other people.

Warmest thoughts and prayers with Vanessa and daughters Natalia, Bianka, & Capri. Deepest condolences. Kobe treated me like a brother. He demanded the best. He taught how to overcome anything no matter the adversity. Your legacy lives 4ever. I love you dear friend. Rest in peace. pic.twitter.com/EHFUg1705f

The Utah Jazz issued the following statement on Bryant's passing:

“We are shocked and saddened to learn about today’s tragedy involving Kobe Bryant and his daughter, Gianna. From the time he entered the league, Kobe was a generational talent and one of the most competitive players in the game. Many athletes in the NBA today grew up emulating Kobe. The impact he has made on our sport will not be forgotten. We respect his dedication to the game and unmatched work ethic. Our thoughts and prayers are with Kobe’s wife, Vanessa, their family and those close to them.”

lost for words, bro was more than a teammate.. my mentor, the homie, a superhero, my idol , big brother thankful for experiences we had, cherished every moment with you dawg long live KB.

Enjoy every single day people, we are always too worried about things that are actually not that important. Life is precious and you never now when it’s gonna end.

Words are tough to find right now. Truly heart broken and praying for each family involved. It was an honor to compete against you. pic.twitter.com/aYF5UNlZzy

The reason I wanted to dunk
The reason I woke up countless mornings to go in my grandparents backyard waking my neighbors up to go shoot.
My Childhood Idol.

I am at a loss for words..Kobe and Gianna you will never be forgotten. What a blessing to see your impact you have had in this world, Kobe. Prayers for the Bryant family. Rest In Peace, little brother and Gigi.. pic.twitter.com/x6EkJaARDD

In 2016, when Bryant retired, the Utah Jazz made a video tribute to him, detailing the love-hate relationship that Jazz fans had with him as a talented rival player and fierce competitor. Bryant also said the Jazz's home court was one of the most intense, which he loved.

Remember this tribute video from the @utahjazz in 2016?

In April of that year, @kobebryant dropped 60 against the Jazz.#TakeNote pic.twitter.com/Az5McPbTwC

Really just stunned. Our adopted son worshiped Kobe (even named his first son Kobe a couple years ago). As a die-hard Jazz fan it drove me crazy and we used to argue and bet each other all the time. I lost most of those arguments and bets because he was just too good. #Respect 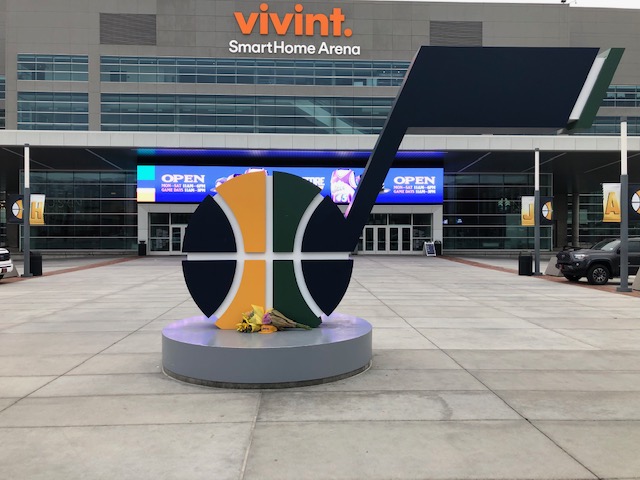