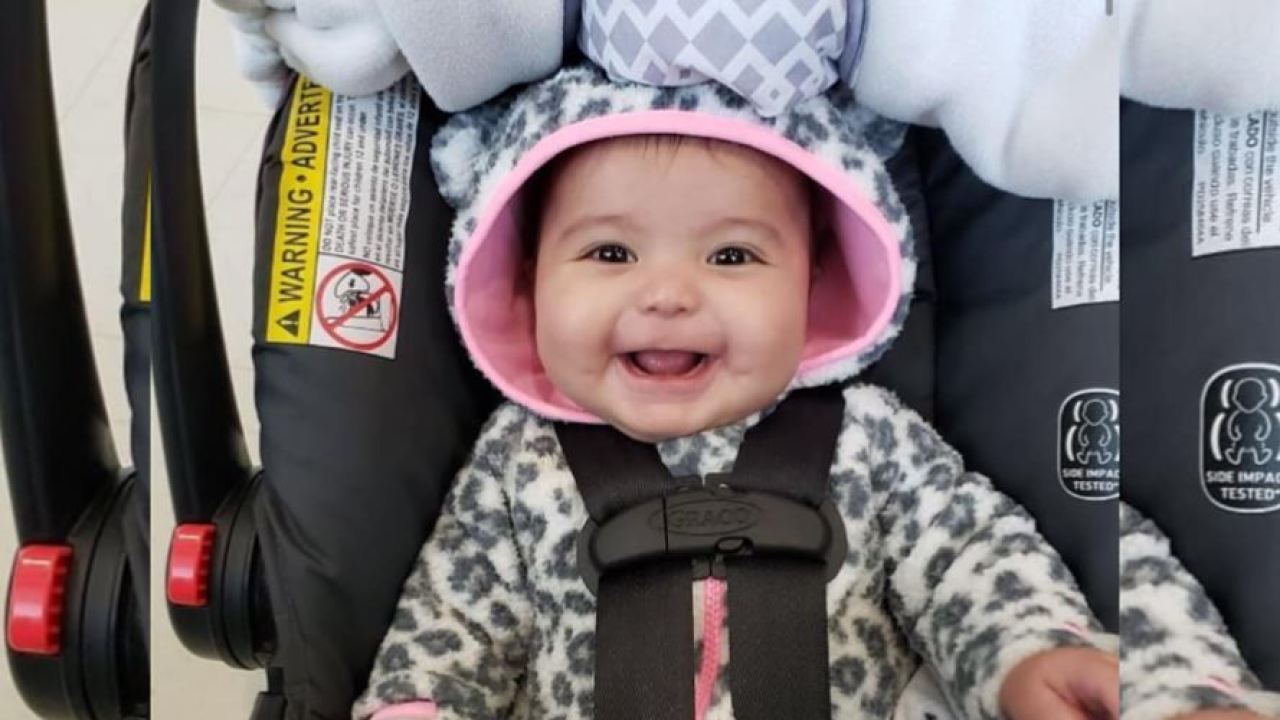 However, the day that changed their lives forever was actually Sept. 6, 2019. That’s the day a woman Jennifer and Mario may never know, made the selfless decision to place her newborn into a Safe Haven Baby Box at Franciscan Health in Hammond.

“I think people need to know that the parents who end up with these babies have love for those women,” Jennifer said. “They don’t stop thinking about her. She gave us a gift.”

The Road That Led To Baby Grace

Jennifer and Mario began the process to adopt a child in 2018 after finding out they would be unable to have children of their own.

“Before we had started the adoption process, we had been trying to have kids for three to four years,” Jennifer said. “When I first found out that I couldn’t have kids, it was really, really hard.”

Jennifer was diagnosed with polycystic ovary syndrome (PCOS) in 2015. For many women, it affects their ability to have children, but with proper treatment those symptoms can be alleviated. For Jennifer, that wasn’t the case.

“Mine for some reason made me infertile,” she said.

“At that point, talking to my husband, we decided that maybe it was going on because it wasn’t meant for us to have children,” Jennifer said.

They weighed the options and decided not to try in vitro or the other expensive fertility treatments, because they weren’t likely to work.

“We decided, ‘Well, maybe now we’ll just stop with it and see where life takes us,'” Jennifer said.

The following summer — June 2018 — they began to look into adoption.

“We decided that maybe there was another child out there that needed us more,” Jennifer said. “And we knew in the state alone there were a lot of kids waiting for their family, for their permanent homes.”

“It wasn’t just spur of the moment. It was something we wanted — we knew we wanted kids. We were just not having a lot of luck with it,” she said.

Jennifer and Mario went through all of the steps to get approved to be a pre-adoptive home which included background checks, fingerprinting and an in-home study. After they were approved, they began receiving emails about kids whose birth parents had their parental rights terminated and were looking for their new homes.

For roughly a year, Jennifer and Mario went through those emails, trying to find the one that was meant to be their child.

Jennifer said they would submit their home study to DCS, who would narrow it down to three families per child.

But the couple was never chosen.

“It was heartbreaking to be turned away. All of the questions, ‘why not us?’ To the point that I had asked my husband if we could quit,” Jennifer said.

The Day Their Story Began

After going through the ups and downs of adoption and not being chosen for other children, Jennifer said it was the story of a baby being left in a Safe Haven box in Hammond that gave her renewed hope.

“In September, when her story originally hit the news, I shared her story,” Jennifer said. “My husband said, maybe we’ve been having such a hard time, because she’s supposed to come home to us.'”

Jennifer and Mario had discussed the infant left in a box and decided that if DCS contacted them about her, they would submit their home study and see how things went.

“But my husband said, ‘Don’t get your hopes up, because you don’t want your heart to get broken again,” Jennifer said.

Within a week, the couple got an email from DCS. They submitted their home study, and then more waiting.

“We thought maybe they had moved on,” Jennifer said.

At the end of the month, DCS called to schedule an interview with Jennifer and Mario.

Then, after what felt like forever, Jennifer got the call she had been praying for — they were chosen to be baby Grace’s parents.

From then, it was a bit of a whirlwind and it wasn’t long before their little girl would be coming home.

“I was actually with my husband at his doctor’s appointment when they called to tell me she was coming. I walked into the doctor and said to hurry up because my daughter was coming home,” Jennifer said. “I think they thought I was joking.”

From the first moment they laid eyes on Grace, it seemed like fate — down to the infant’s given name.

“We had talked and knew we wanted to name our baby Grace,” Jennifer said.

And when the infant showed up at their home, they were already calling her baby Grace.

“We wanted to name her Grace because either way you look at it Grace was saving us and we were saving Grace,” Jennifer said. “I asked them how they knew and they said, ‘Oh no, that’s the name we gave her.'”

“We also knew we wanted her initials to be G.E.M., and they had already given her the middle name Elizabeth. It was perfect.”

From Foster to Family

Because of the way the adoption process works in the state of Indiana, Jennifer and Mario kept Grace a secret to anyone outside of their close circle.

And because Grace was the first Safe Haven baby in their area, there were a lot of steps that needed to be taken to make sure the adoption process was done properly. The couple got a lawyer and submitted their petition to adopt, but before it could go to the courts they had to publicize their intent to adopt to give Grace’s biological parents time to come forward.

During the next three months the family received monthly visits from DCS and kept in contact with their case worker, just like any foster parent would. They still had to prove to DCS that they were the right fit for Grace and that she was getting the care she needed.

On January 22, the next stage of their journey began when a judge in Hammond County declared Jennifer and Mario Mendoza were officially Grace Elizabeth’s parents.

It wasn’t a long journey compared to some, but it was a journey that may never have been if it wasn’t for Indiana’s Safe Haven Baby Boxes.

Jennifer also has a message for the woman who gave birth to her daughter, “I would love to tell her thank you. She’s a blessing. Grace and her biological mother both. I love this woman, I don’t even know who she is and I’ve got so much love for her and what she gave our family.”

There are currently 20 Safe Haven Baby Boxes in the state of Indiana, including the one Baby Grace was placed inside as a newborn.

The goal of Safe Haven Baby Boxes is to make it so mothers have a safe place to surrender their newborns anonymously.

Baby boxes are safe incubators that have alarm systems, so 911 is notified as soon as a baby is placed inside. The baby boxes also have heating and cooling features.

Indiana’s Safe Haven law allows people to anonymously surrender their healthy infants at any fire station in the state without fear of criminal prosecution.

LIST | Find a Safe Haven Baby Box Near You

This story was originally published by Katie Cox at WRTV.