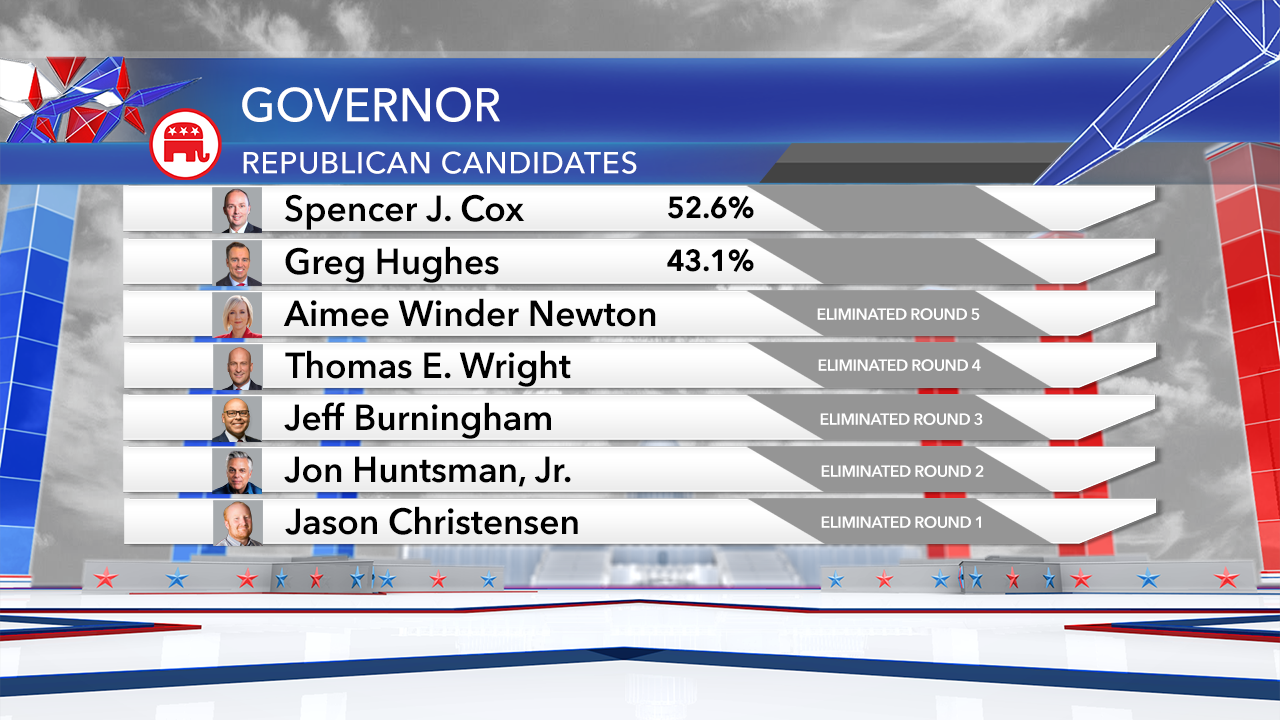 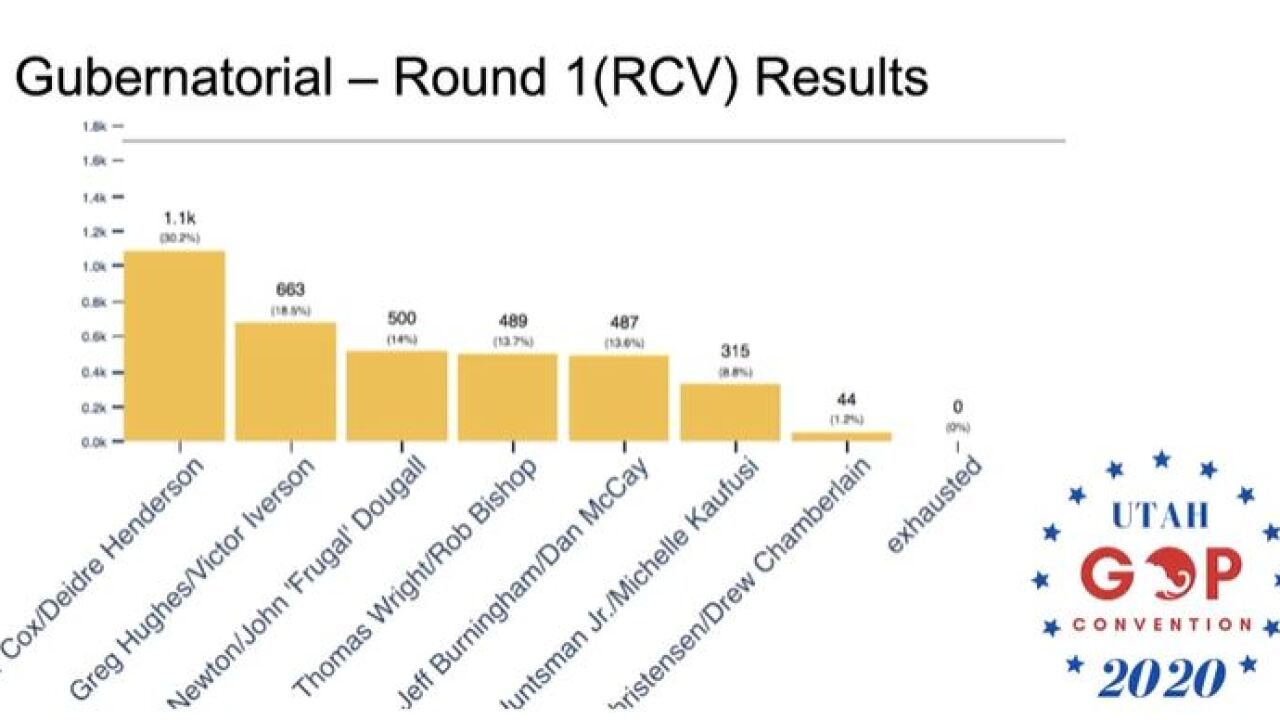 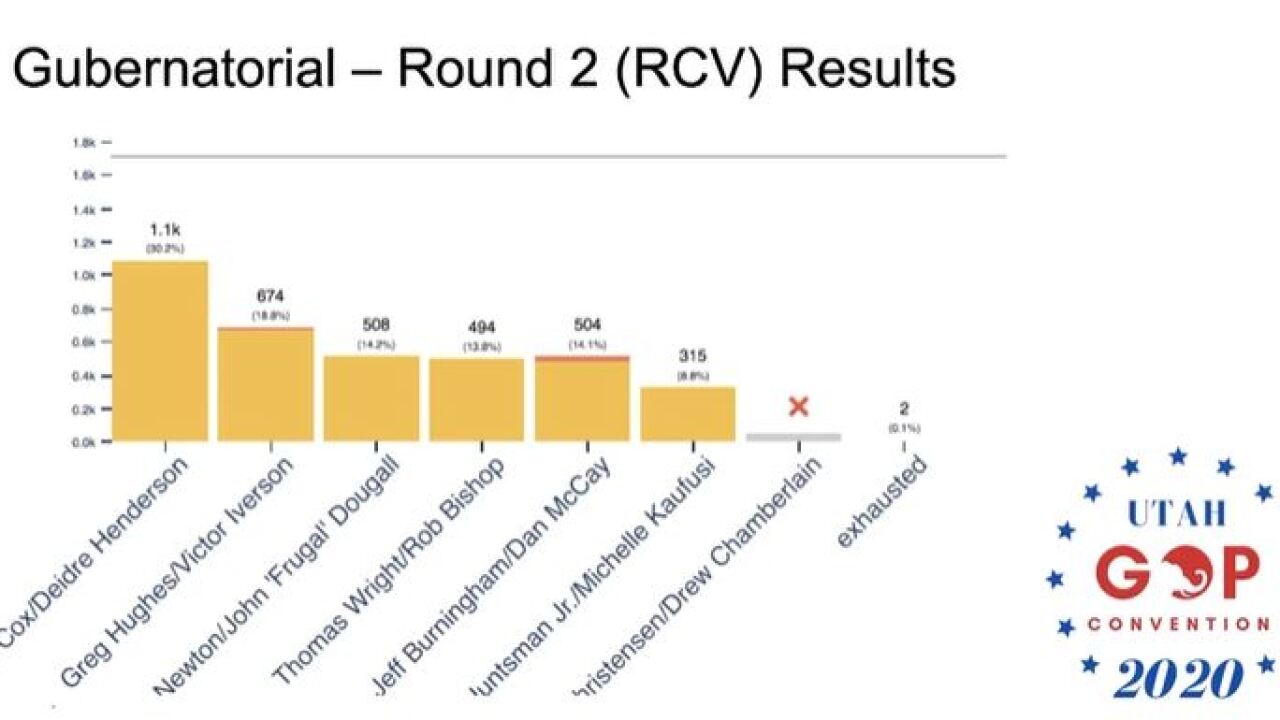 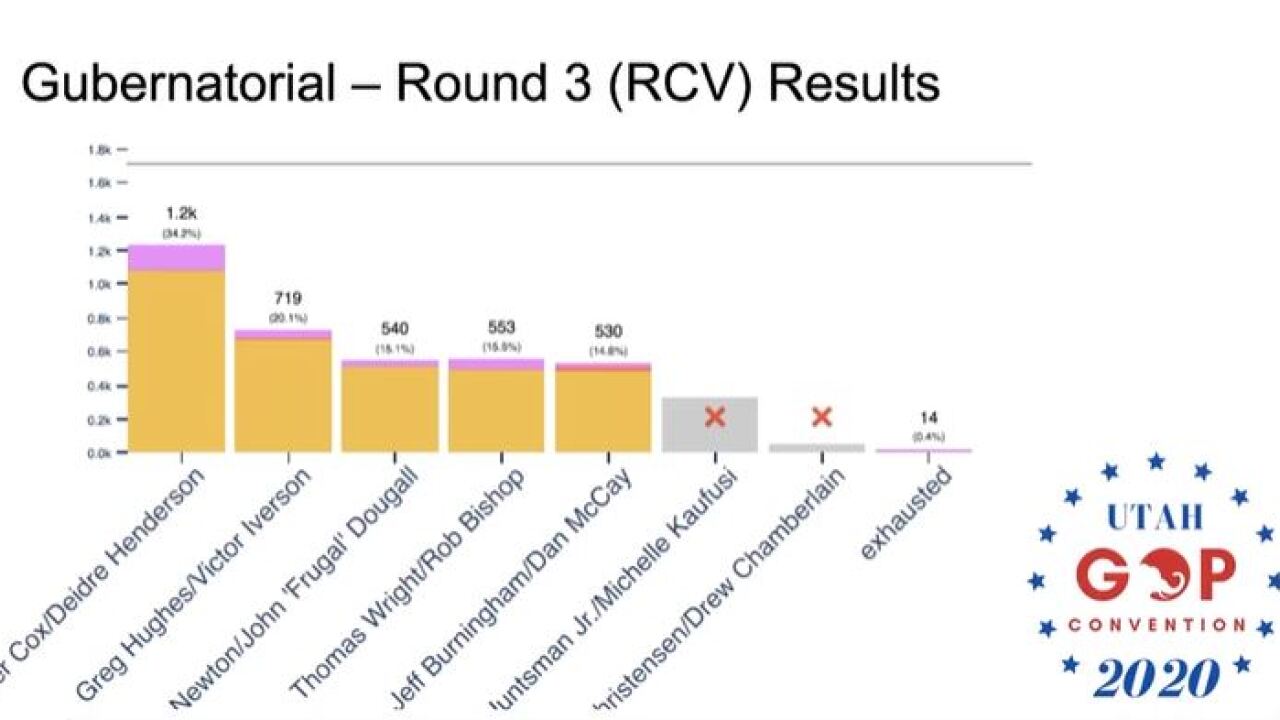 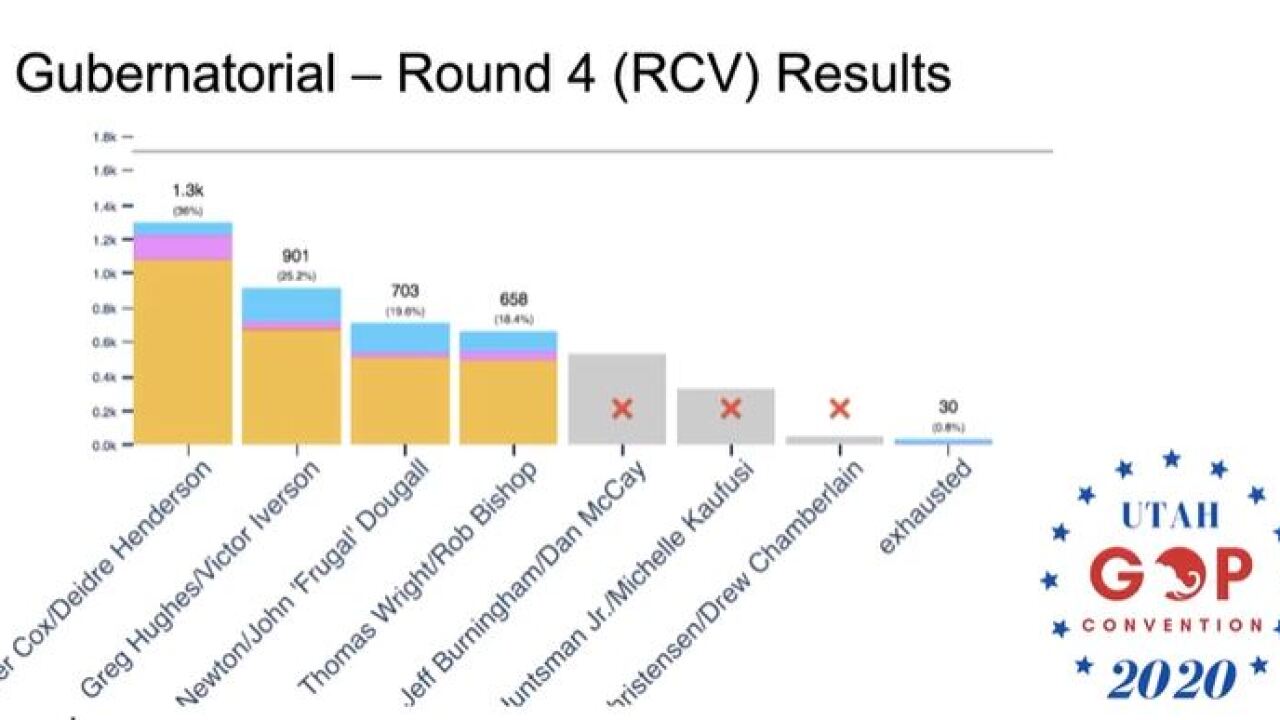 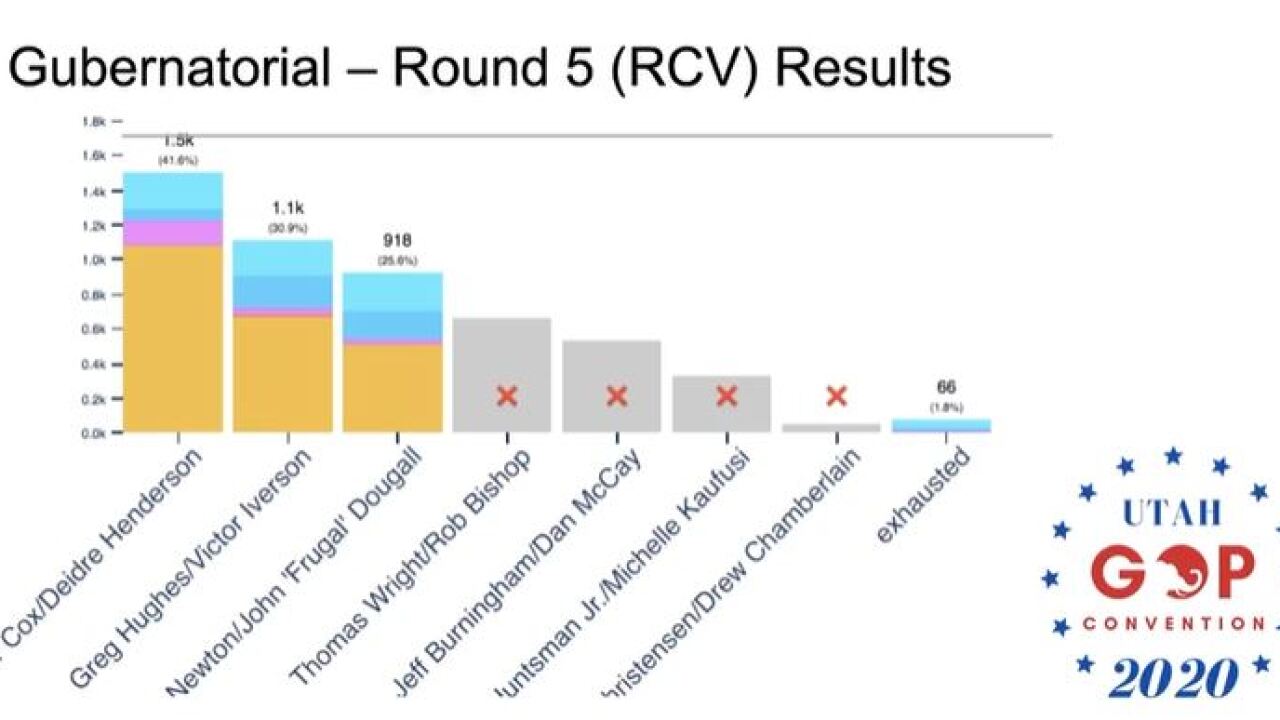 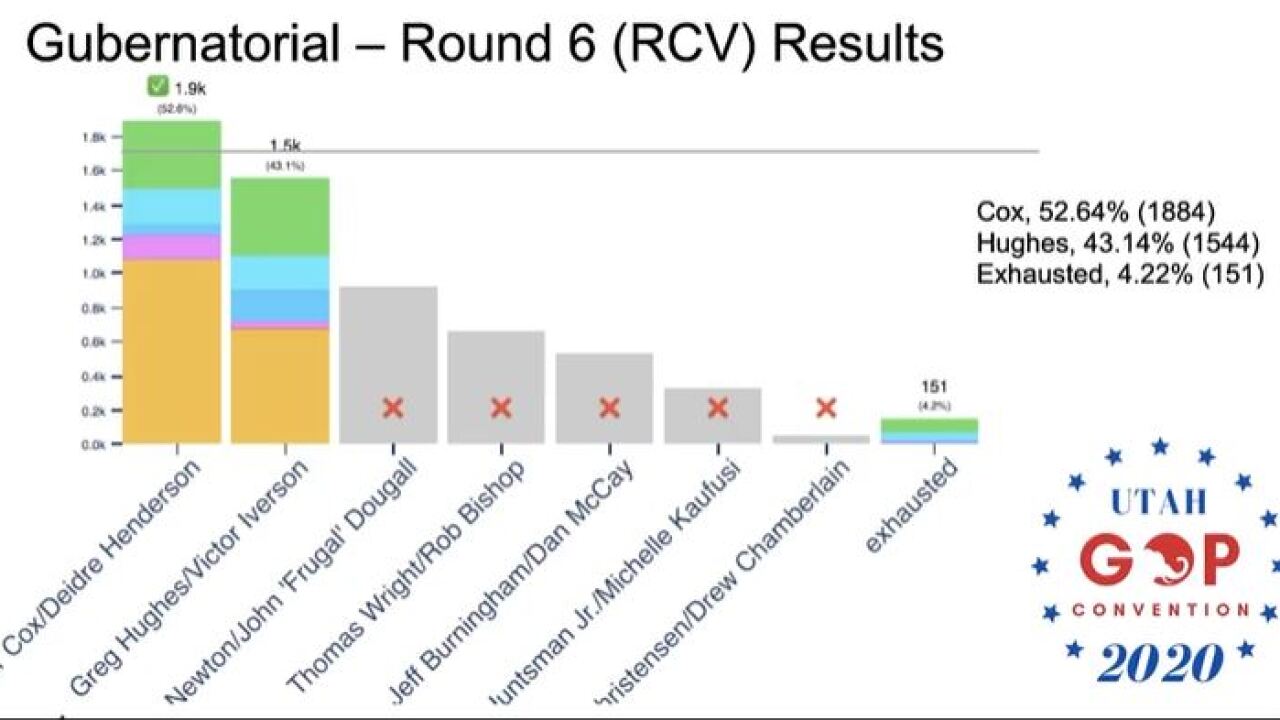 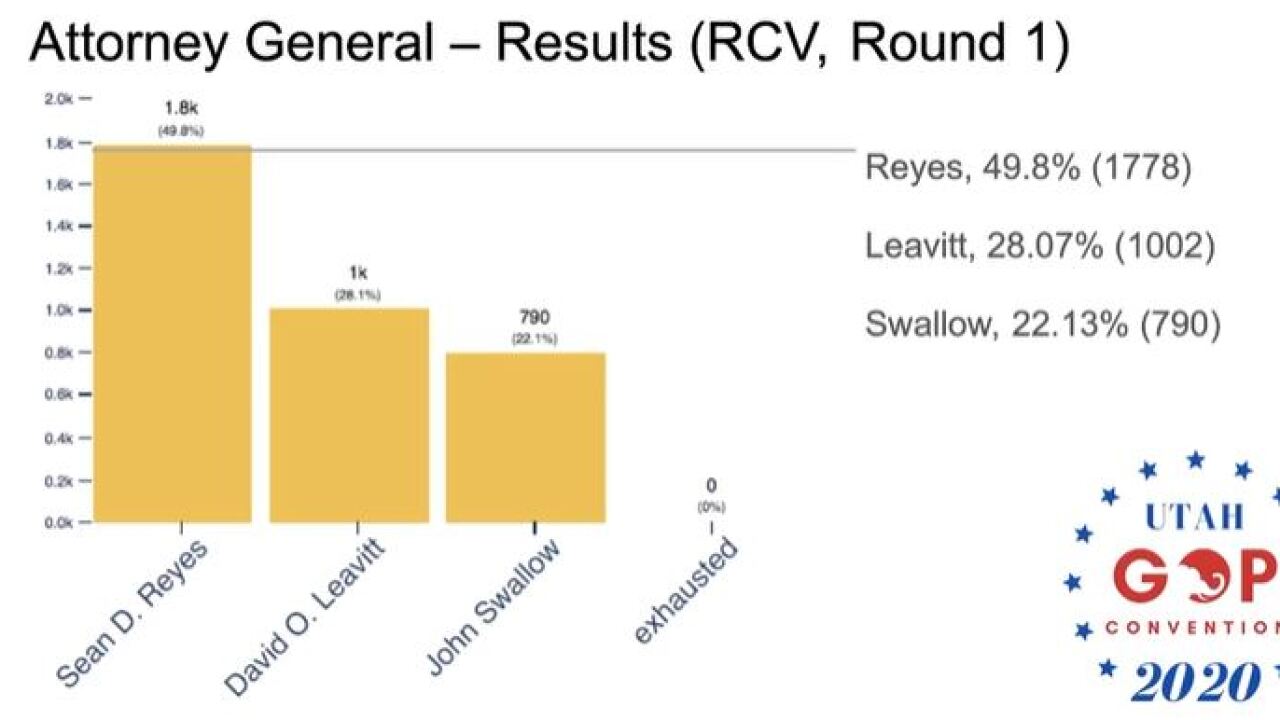 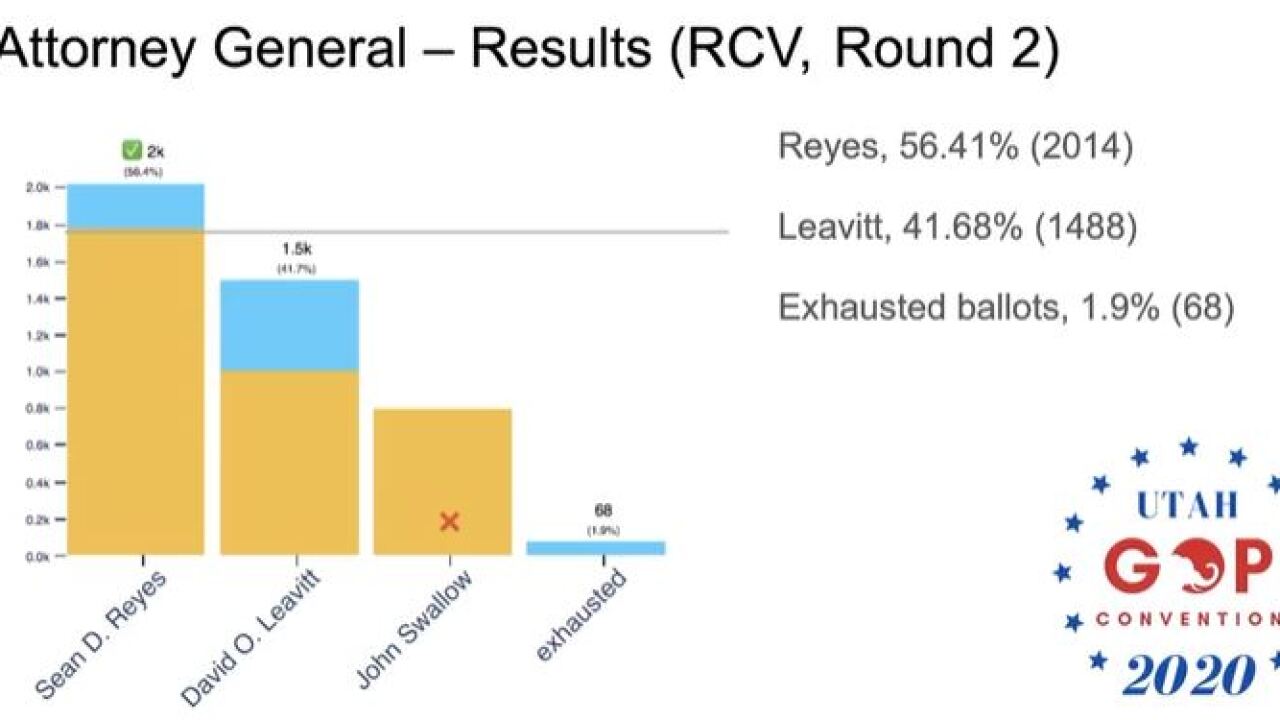 The convention was forced to be online only because of the COVID-19 pandemic. Still, party leaders saw phenomenal turnout. The results came late Saturday and early Sunday after results from three days of online voting were tabulated. The party utilized ranked choice voting to whittle down races for congress, attorney general and governor.

Here are the results:

The race for governor was decided by ranked-choice voting. After each round, the candidate with the lowest amount of votes was eliminated, and their votes were redistributed to each delegate’s next choice.

Jason Christensen was eliminated after the first round, followed by Jon Huntsman Jr. in the second, Jeff Burningham in the third, Thomas Wright in the fourth, and Aimee Winder Newton in the fifth.

This left Cox and Hughes as the remaining candidates, and since neither received above 60%, they will both advance to the primary election joined by Huntsman and Wright, who obtained enough signatures to be on the primary ballot. Cox had also already qualified via signatures.

He credited his running mate, Sen. Deidre Henderson, with reaching out to delegates and "doing the heavy lifting."

"We’re just so grateful to have the support of the delegates and come out as the GOP convention winner going into the June primary is a really big deal," he said.

In an interview with FOX 13, Hughes said COVID-19 changed his campaign dramatically.

"It made this race a lot harder, but it is a test of leadership," the former Utah House Speaker said. "You’ve got to find a way to get a workaround."

He said he and his running mate, Washington Co. Commissioner Victor Iverson, are prepared for a strong showing in June, particularly courting conservative candidates.

"A base matters and we are the conservative ticket running for governor. It’s a Republican primary and registered Republicans in Utah are conservative. We have a strong base," Hughes said.

In a surprise, incumbent Utah Attorney General Sean Reyes was forced into a primary with Utah County Attorney David Leavitt. Former Utah AG John Swallow was eliminated in the first round.

This race had a jaw-dropping 12 candidates in the race to replace retiring Congressman (and Lt. Governor candidate) Rob Bishop. After 11 rounds of balloting, former state agriculture commissioner Gibson emerged the frontrunner. However, Bob Stevenson and Katie Witt had already secured a spot on the ballot through signature gathering.

Coleman, a representative in the Utah State Legislature, and Owens, a retired NFL player, emerged the frontrunner after six rounds of balloting in the race to challenge incumbent Democratic Congressman Ben McAdams. However, Jay McFarland and Trent Christensen gathered signatures to get a spot on the June primary ballot, as did Owens.

The COVID-19 pandemic forced the Utah GOP to abandon its traditional convention where thousands pack an arena to choose candidates and sometimes argue over intra-party matters. So party leadership pivoted to a "virtual convention," taking delegate votes over an app or over the phone.

The Utah Republican Party has seen huge participation as a result, Brown said. Of the 3,850 delegates credentialed for the convention, the party recorded 93% participation. (The Utah Democratic Party also saw record-breaking participation with 85% turnout among its delegates.)

"I’ve heard phenomena reviews," Brown said. "Here’s my big problem: everyone is saying to me, 'Derek, let’s do this again. I never want to do an in-person convention ever again. This is so easy!"