CBS News and Business Insider confirm that Amazon removed a T-shirt featuring the phrases "stand back" and "stand by" that included the initials PB surrounded by laurels — an insignia similar to the logo for Fred Perry, whose polo shirts the group has co-opted as a uniform.

In statements to both CBS News and Business Insider, Amazon confirmed that it had removed the shirt from its platform.

"All sellers must follow our selling guidelines and those who do not will be subject to action including potential removal of their account. The products in question have been removed," Amazon's statement read.

"It has come to our attention that content promoting hate and violence has been circulating on Teespring," the site said in a statement to CBS. "We have no interest in profiting off hate or violence, and in this case we immediately removed the designs as they violate our policies."

Several "stand back, stand by" Proud Boys shirt are currently available for sale on eBay. A spokesperson said the site is currently working through "the process of reviewing and removing the Proud Boys items under their policy that prohibits offensive materials." 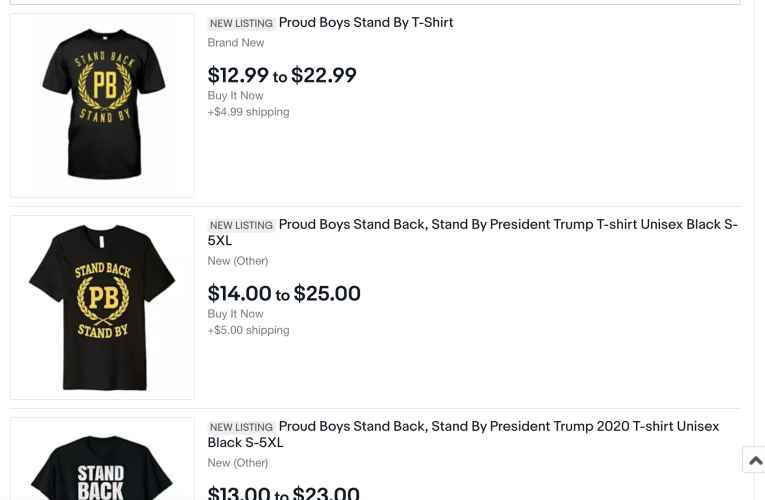 The Proud Boys are a group of self-described "western chauvinists" known for committing acts of political violence against leftists, particularly this summer in Portland, Oregon. While the group has denounced white supremacy, members are known for making xenophobic, sexist and Islamophobic remarks online and at rallies.

Many Proud Boys members celebrated Trump's comments following Tuesday's debate, seeing the "stand by" comment as a validation of their violence against antifa and other leftists.