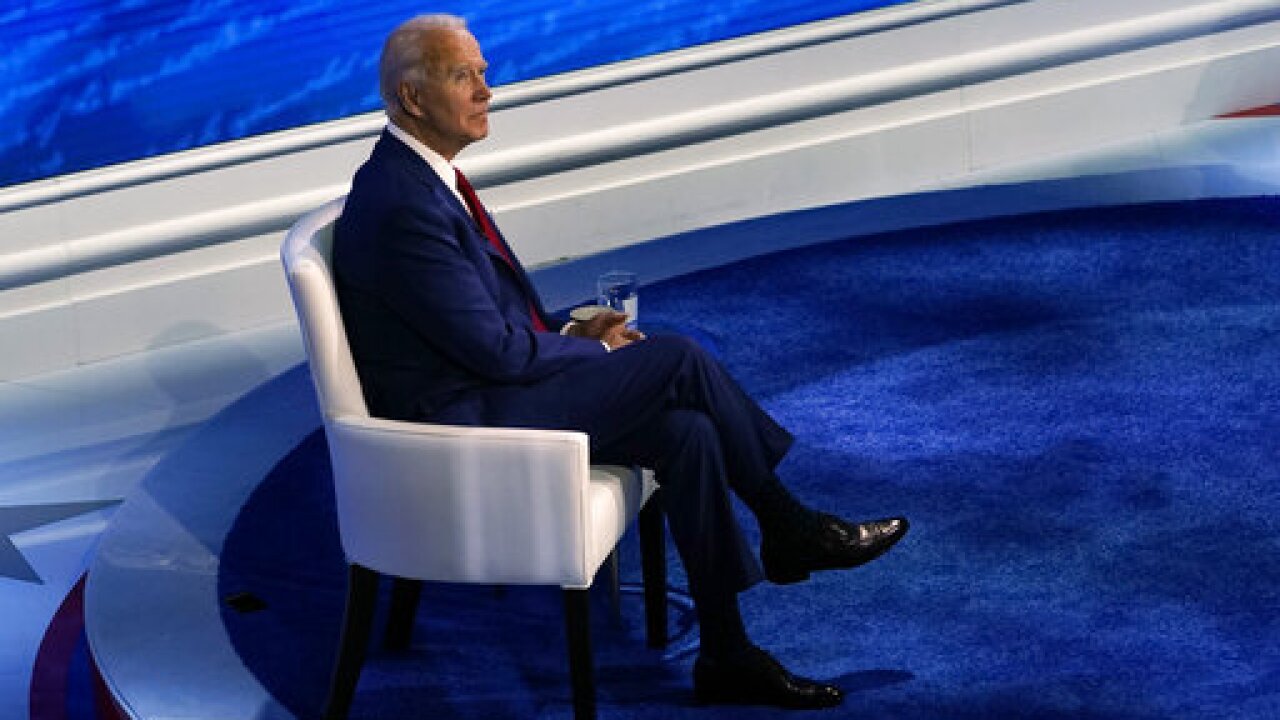 Joe Biden took questions from voters in Pennsylvania on Thursday on ABC as President Donald Trump did the same on NBC in Florida at the same time.

Pennsylvania is considered one of the most important battleground states in this year’s election.

“It depends on the state of the nature of the vaccine when it comes out and how’s it being distributed,” Biden said, adding that he will judge a mandate based on the efficacy of a vaccine.

Biden was then pressed on how to enforce a vaccine mandate.

“You couldn’t enforce it,” Biden added.

Biden criticized Trump for his initial response to the virus, pointing to an interview with Bob Woodward, when Trump acknowledged he did not want to panic Americans.

“The president was informed how dangerous this virus was already way back in February,” Biden said.

“He said he didn’t tell Americans to panic. He panicked. He didn’t say a word to anybody,” Biden added.

Biden said that the federal government could play a key role in helping children get back to school amid the pandemic.

"We need more teachers, smaller pods, we need ventilation systems changed,” Biden said. “There are a lot of things we need now. I laid them out in detail… We did lay out exactly what needed to be done.”

Biden said he vowed not to raise taxes on those making below $400,000 per year even though he would roll back the tax cuts Republicans signed back in 2017. Biden said much of the over $2 trillion in tax cuts went to the wealthy. Biden said he would increase taxes on wealthier Americans.

“When I said the Trump tax cuts, about $1.3 trillion of the $2 trillion in his tax cuts went to the top one tenth of 1%,” Biden said. “That’s what I’m talking about eliminating. Not all the tax cuts that are out there.”

Joe Biden was asked if he still supports the Crime Bill he signed in 1993. Biden said he did not, and he placed the blame on states for using federal funds to build more prisons.

“The crime bill itself did not have mandatory sentences, except for two things," Biden said. "It had three strikes and you’re out, which I voted against in the crime bill, but it had a lot of things in it that turned out to be both bad and good,” he said, before noting his work on the Violence Against Women Act and an assault weapons ban."

While some on the liberal wing are calling on defunding police departments, Biden said he opposes it. He added he believes that more officers can make communities safer, “If they’re involved in community policing and not jump squads.”

Following the nomination of Amy Coney Barrett, some Democrats have called on a potential Biden presidency to add Supreme Court members. Biden said he is opposed to adding members to the Supreme Court, but would not rule out adding his appointees to the court.

Barrett will likely be confirmed by the US Senate next week, giving Republican-appointed justices a 6-3 advantage in the high court.

"I have not been a fan of court packing because it can generate – whoever wins, it keeps moving in a way that is inconsistent with what is going to be manageable,” Biden said. “I am not a fan, but it depends on how this turns out.”

Biden said a fast confirmation of Barrett could sway him.

“It depends on how much they rush it,” Biden said.

Biden criticized the Senate for taking up Barrett’s nomination, but not working on a stimulus bill.

“They have no time to deal with that but they have time to rush this through,” Biden said.

Biden he would take a definitive stance on adding Supreme Court members by Election Day, depending on how the Barrett nomination goes.