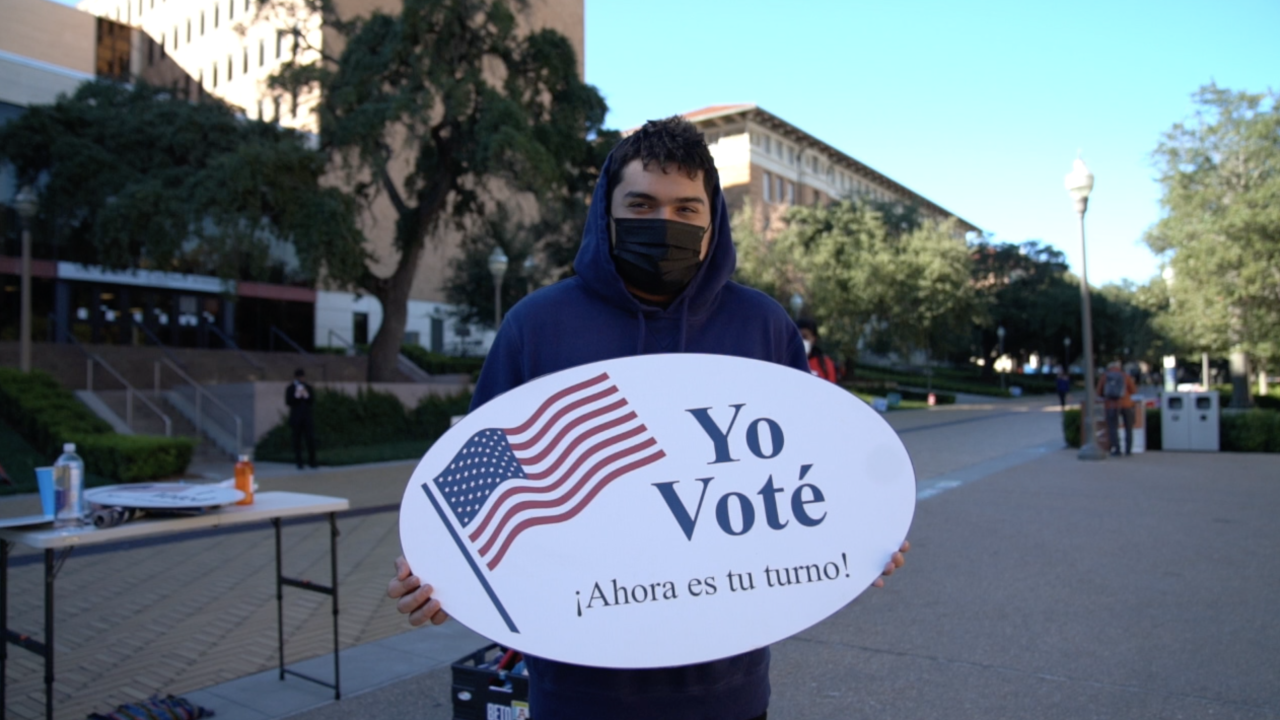 AUSTIN, Texas -- Voting is a critical part of the democratic process.

“That’s the way our democracy is supposed to work. As citizens, we have the right to vote, but it’s also a responsibility of citizenship,” Travis County Voter Registrar Bruce Elfant said.

Before you can vote, you have to register. Elfant says he’s proud of the participation this election season in Travis County, Texas, where Austin is located.

“We’re very excited," Elfant said. "This year, we hit 97% of all eligible citizens are now registered to vote and that is a high mark for us.”

It’s not just a high mark, it’s a record for the county. Considering the median age is 34, many of those who registered were young adults.

“Both political parties are going to want to get the vote out as much as possible to make sure that they have a secured win," Rommel said. "It’s really created kind of a race to see who can register more voters and it’s really exciting to see that because we’re getting everybody to participate and be involved.”

Alexandra Evans is the President of University Democrats at UT Austin. She says she’s been telling fellow students that voting is a right many people have fought for. She hopes to convince others that their vote truly does count.

“When our generation turns out, we get people who actually represent our interests and we don’t have to settle,” Evans said.

The recent pattern of young adults actively participating in elections could bring results we have yet to see in our democracy.

“Typically the younger voter is the less likely voter," Elfant said. "As far as I’ve been around, that’s been the case. But in 2018, we saw that starting to change and I think we’re seeing it change more this year.”

“Young people forever really, I mean even since the voting age was lowered to 18, have had the lowest turnout rates of any voting age group,” Democracy Fellow Tova Wang said.

Wang is a Democracy Fellow at the Ash Center at the Harvard Kennedy School. For 20 years, she’s been researching voter suppression tactics and ways to increase voter participation. She says politicians don’t usually speak to the needs of younger generations, but this, year she says young adults are demanding change.

“They have a very strong sense of wanting to have their voices heard on climate, social justice, economic justice, and I am not surprised that in addition to taking to the streets and social media, they’re now making their voices heard through the ballot,” Wang said.

Evans says that 97% voter registration is proof hard work pays off, especially since she says the process of registering to vote is more complicated in Texas compared to other states.

She says she has to balance getting adults enthusiastic about voting while also explaining the lengthy process of registering. According to Elfant, 40 states allow people to register online, but that’s not the case in Texas.

Evans adds college students move a lot and may not understand they need to register at a new address.

“And if you miss like a signature, or they can’t decipher one number, sometimes your whole voter registration can get messed up and that’s really frustrating and discouraging,” Evans said.

Nonetheless, it’s clear that won’t stop them in Travis County.

“Especially in general election years, the contentiousness of it gets really high and it seems that this one is extremely high compared to others,” Rommel said.

Both Rommel and Evans say they’d like to see the momentum of young adults voting continue into the future.

“This generation is going to be a force to be reckoned with,” Wang said.