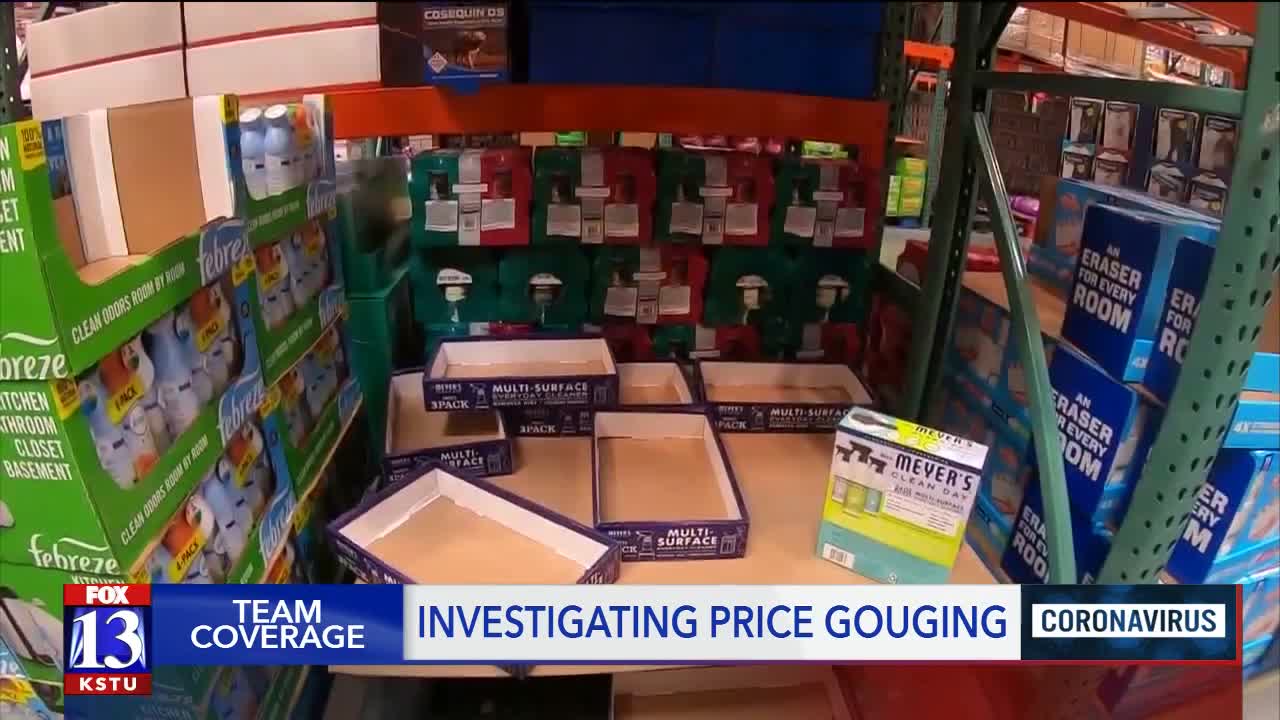 The Utah Division of Consumer Protection has received hundreds of reports of price gouging over the past few days due to the outbreak of the novel coronavirus.

SALT LAKE CITY — The Utah Division of Consumer Protection has received hundreds of reports of price gouging over the past few days due to the outbreak of the novel coronavirus.

State officials say each case is now under investigation. Anyone found to be violating state laws that prevent price gouging during a state of emergency will be issued a $1,000 fine per transaction, up to a maximum of $10,000 per day.

"These are some brutal — some sociopathic — perpetrators out there who have no conscience whatsoever," said Attorney General Sean Reyes. "What normally would sell for $3.00 we can sell for $300 and that’s clearly against the law."

If it weren’t for the state of emergency, people or companies could charge whatever they want.

According to the Price Controls During Emergencies Act, an “excessive price” is defined as “a price for a good or service that exceeds by more than 10% the average price charged by that person for that good or service in the 30-day period immediately preceding the day on which the state of emergency is declared.”

Reyes said many of reports are from people charging an excessive amount for basic items like toilet paper, water, hand sanitizer, cold medicine, and even baby formula.

"It’s consistent with what we saw with Hurricane Katrina," Reyes said.

Daniel O'Bannon, the director of the Utah Division of Consumer Protection, said many of the reports sent into his office come online retailers or individuals selling things online.

"If it's a sale from out of state to a consumer in the state... we have jurisdiction over that," O'Bannon said. "We're often able to find out who is behind those sales."

FOX 13 showed Reyes screenshots from a self-described e-commerce company that has posted a large number of listings for expensive paper towels.

One of the website's listings asks for $107.36 for a two-pack of Bounty paper towels.

I showed this to Attorney General @SeanReyesUT today.

"I haven’t seen this particular one, but we have received complaints... I mean, my immediate reaction again is a visceral one. It’s of disgust."@UtahAG https://t.co/4uOlGMTgnk

Various customers who have attempted to buy a variety of other products have commented that the website is a "scam."

"I haven’t seen this particular one, but we have received complaints," Reyes said. "I mean, my immediate reaction again is a visceral one. It’s of disgust."

Reyes and O'Bannon said some of the online listings that will be investigated are likely jokes, but they encourage people to continue reporting the perceived price gouging.

FOX 13 asked Reyes about a post requesting $500 for a half-roll of Charmin toilet paper.

"I’ve seen a lot of the memes and a lot of the jokes," Reyes said. "I think (the Division of Consumer Protection) would rather spend their time going after cases where it’s actually happening... Technically speaking? You would be in violation of the law."

PRICE GOUGING -- Most posts like this are just a joke... but what if someone accidentally clicks the wrong button and spends the money?

That joke could turn into a crime. pic.twitter.com/2xwe4cqJ1j

Another case FOX 13 has been looking into took place at a local gas station in Kaysville.

Kimberlee Scott, who lives in North Salt Lake, said a female employee at the gas station tried to sell her toilet paper out of her own home.

"I just walked in and said hey, dumb question, do you guys have toilet paper?" Scott said. "The lady’s like... I’m selling it across the street for like 30 bucks for a 12-pack."

FOX 13 spoke to the employee who characterized the interaction with Scott as a misunderstanding. The employee and her husband said they were "purely doing it to be helpful" and only charging $20 to cover the cost of purchase.

The couple said they have since stopped selling toilet paper.

"We didn't make any money," the employee told FOX 13. "I never sold it at the gas station. I didn't even talk to anybody about it."

The manager of the gas station said he spoke to his employee and was satisfied with her response.

"The store has nothing to do with this," the manager said. "This is something she did on her own. We don't believe she was trying to price gouge anyone. She was just trying to sell toilet paper for the price she paid for it."

Scott said she still plans to report the case to the Division of Consumer Protection.

"We want to hear these reports," O'Bannon said. "We have investigators working on these matters."

If you have a price gouging complaint, you can call the Division of Consumer Protection at (801) 530 6601 or send an email to ConsumerProtection@utah.gov.