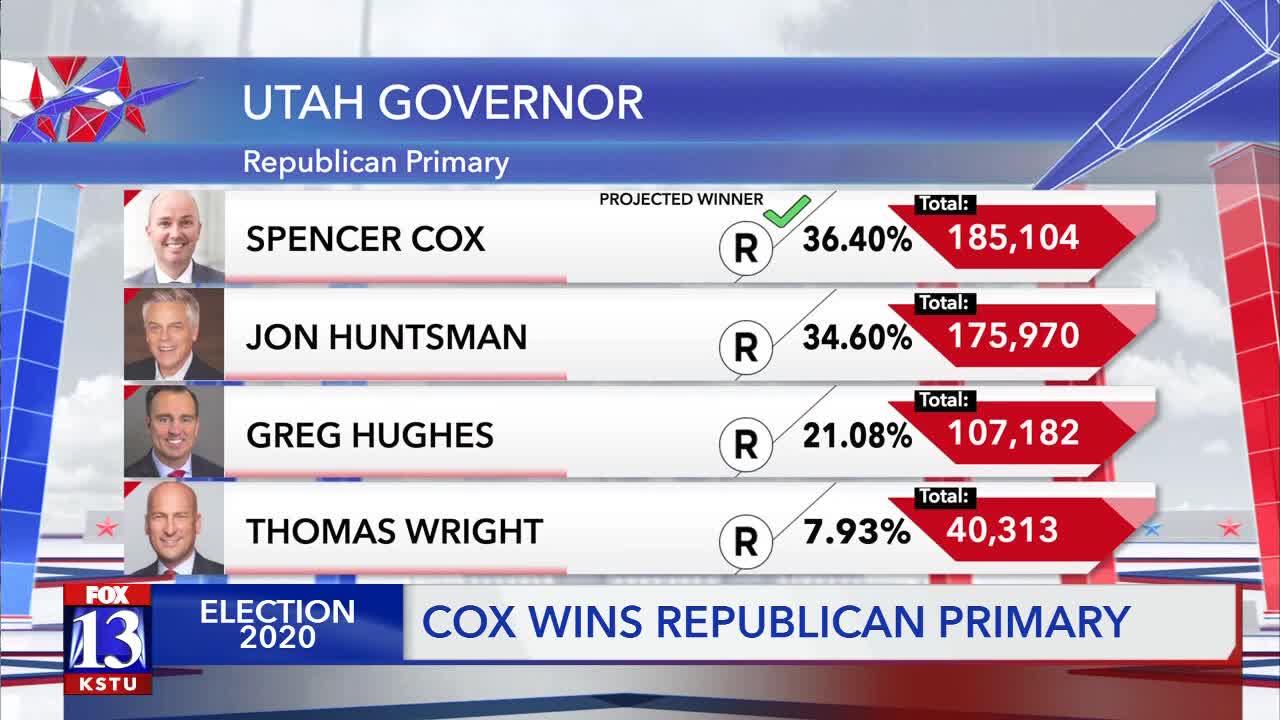 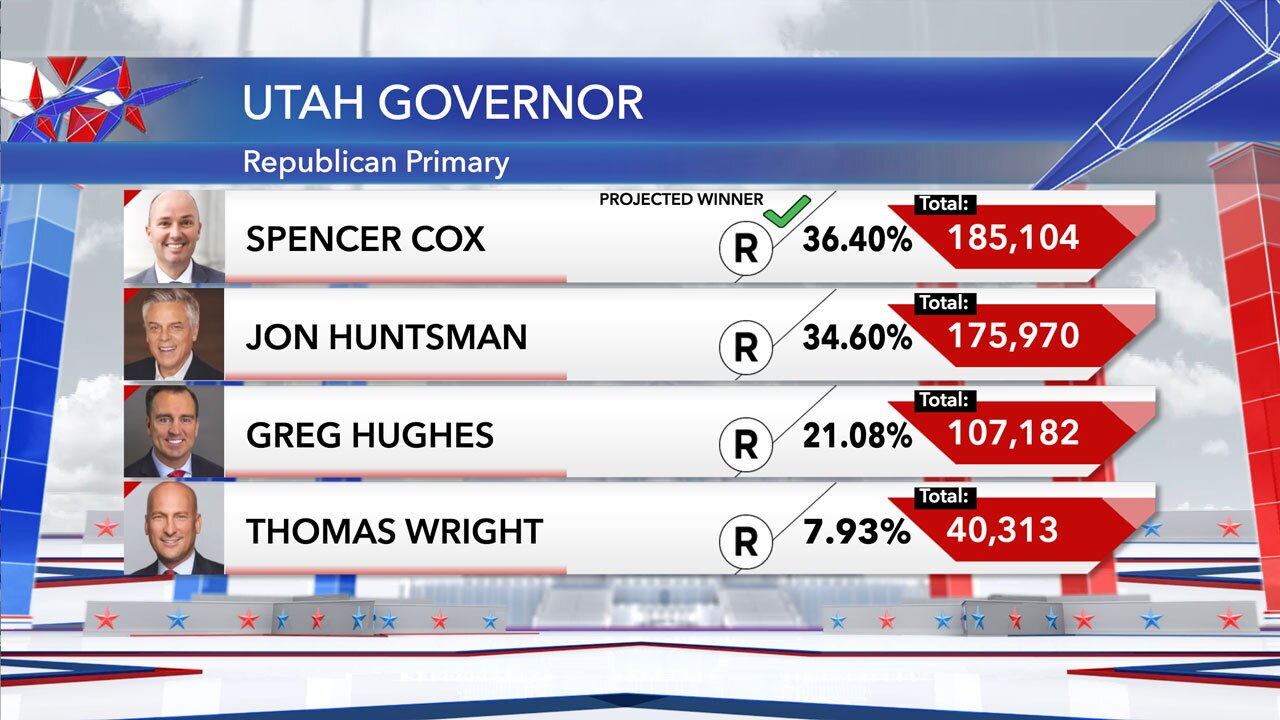 SALT LAKE CITY — After almost a week of ballot counting in an election significantly impacted by COVID-19, Lt. Governor Spencer Cox has won the GOP primary for governor.

The Associated Press called the race on Monday afternoon. The latest results show Cox and his running mate, Sen. Deidre Henderson, winning by about 9,100 votes in a close race against former U.S. Ambassador and former Utah governor Jon Huntsman Jr.

FOX 13 is told Cox was out of town vacationing with his family when he got the news.

"Sen. Henderson and I are humbled by the vote of confidence from the people of Utah in selecting us as the Republican nominees for governor and lieutenant governor," Cox said in a statement released by his campaign.

"As farm kids from Sanpete County, Abby and I never dreamed of having this opportunity. If elected in November, we will take our rural values of hard work, honesty, and responsibility to the Governor’s office each day. The next four years will be critically important to Utah’s future. We must rebuild our economy, restore the joy of teaching for our educators, and bring new opportunities for smart growth to both the Wasatch Front and rural Utah."

Cox said that Huntsman called him to concede the race. In his own statement, Huntsman said he accepted the results of the race.

"Today the race was called, and we accept the will of the people, as is our tradition as Americans. The visions put forward for Utah were very different, and regret that I will not be leading the efforts in moving us towards a new horizon. This was anything but a typical campaign season, with the COVID-19 pandemic making impossible our ability to meet face-to-face with more of the people in communities across our state. However, I am heartened by the record voter turnout we saw in this primary election and I hope every eligible voter will exercise this most sacred right in November," Huntsman said.

Huntsman, who resigned as Utah governor in 2009 to serve as President Obama's Ambassador to China, and later Ambassador to Russia under President Trump (before returning to Utah to run for office again), suggested this was not the end of public service for him.

"Public service is in our blood and whatever our next chapter may hold, I am confident we will find a way to continue to contribute to the good of our community," he wrote.

Cox will now go on to face Democrat Chris Peterson and his running mate Karina Brown in November.

"With unprecedented unemployment, a mismanaged pandemic response, underfunded public schools, and a crisis in moral leadership in Washington, more and more Utahns believe it is time for change," Peterson said in a statement Monday. "Karina and I plan to run a positive race focusing on issues facing Utahns in their daily lives."

Governor Gary Herbert offered his congratulations to his lieutenant.

"I want to offer my best wishes to all of the candidates who ran for the republican nomination. They offered Utah Republicans good options on the most important challenges and opportunities facing Utah. Congratulations to Spencer and Abby and their family for running a positive campaign and earning the nomination. My advice is to remind them, it is not over yet and that they will have stiff competition in the November election—so don’t take anything for granted and keep working hard!" he said in a statement.

Utahns waited a week since the June 30 primary to know who won. For years now, Utah has successfully carried out vote-by-mail elections. Because of the coronavirus pandemic, it was leaned on even more. In-person ballot locations were suspended and only a handful of counties offered "drive-up" balloting. Ballots themselves had to be quarantined for 24 hours before they could be counted because of COVID-19 fears.

Election results are expected to come in throughout the rest of the week as outstanding ballots are tallied. The official canvass is July 21.