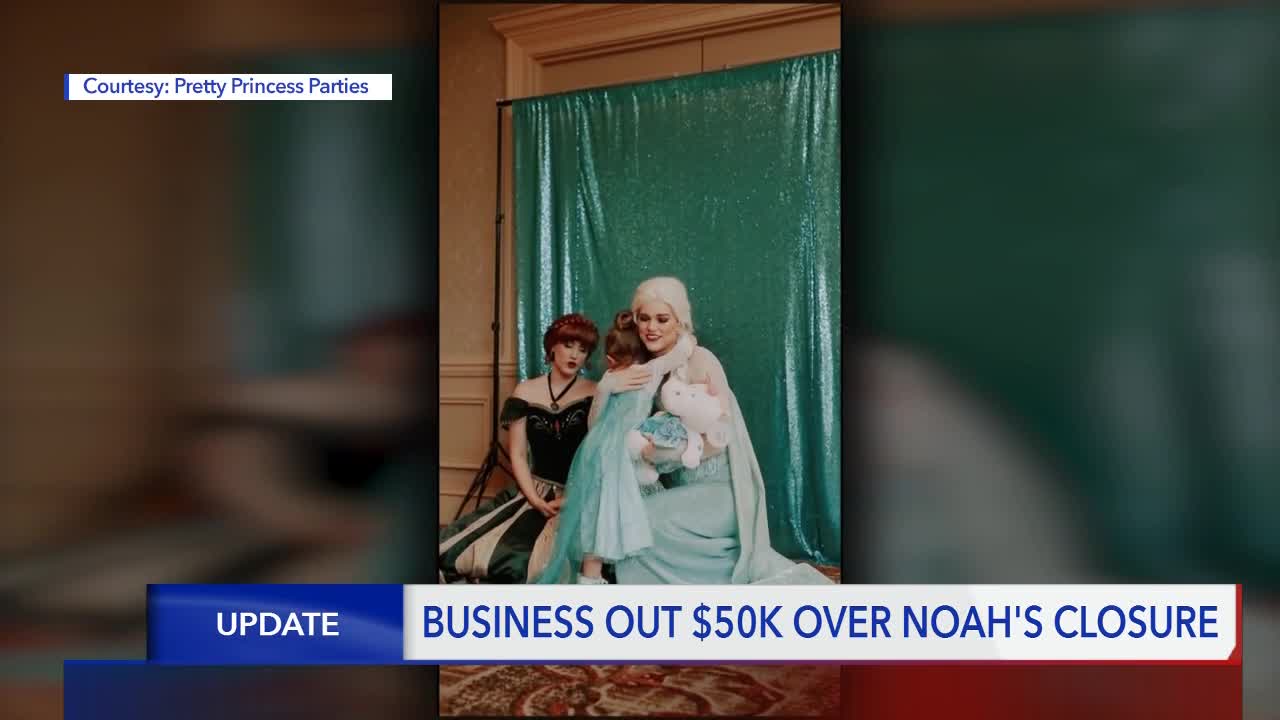 “They just light up and I live for it,” said Jodi Polasky as she described the magically moments when children see their favorite princesses. “I thrive on their energy and excitement.”

“They get to come in and dance and take pictures and do crafts and have sweet treats, all sort of things with the characters,” said Jodi.

Hosting 700 guests a day in 35 different cities, Jodi said they try to make sure it’s a magical experience.

“A lot of these families could never afford to go to theme parks to meet their favorite fairytale princess characters,” Jodi said. “It really is a once-in-a-lifetime opportunity.”

Jodi said not only were the venues widespread, they were also very ‘do-it-yourself’ friendly, allowing them to bring in their own food and décor.

“We no longer had to spend all of that time looking for spaces, so for us it was a really great opportunity and we were quick to send them our money,” said Jodie.

Jodi said Pretty Princess Parties had an overall good experience with NOAH’s Event Venues, even though a few of the locations they had booked shut down mid-contract, without notice.

“[NOAH’s] just explained it to us that those particular locations were having trouble,” said Jodi.

Jodi said the company assured her there was not a larger issue and agreed to give 6-months’ notice should another venue close – So, Jodi decided to sign a second year-long contract.

“We signed up for a second year with them in December and literally four days ago they took our last payment,” said Jodi. “We were paying them in 4-thousand-dollar increments, so every two weeks we were paying them that.”

In total, Pretty Princess Parties had put down 50-thousand dollars -- enough to cover the cost of all 35 Fairytale Balls scheduled across the U.S for 2020.

“They really were pushing to get our full payment for 2020 up front and I just kind of accepted it,” said Jodi.

The same day they made their final payment, they received a call from a client who had tickets to their Oklahoma City event the following Saturday. Jodi said the client expressed concerns over the venue, saying it was ‘permanently closed.’

“I called everyone I could connected to NOAH’s and no one would pick up, no one would respond to my emails,” said Jodi.

Finally, an employee with NOAH’s, whom Jodi had been in close contact with, answered. “She said, ‘I’m not allowed to talk to you, but yeah, they’re all closing and you better figure something out.’”

Little did Jodi know, NOAH Corp. had filed for chapter 11 bankruptcy in May of 2019 – at that time, they had 42 locations nationwide, and were 50-million dollars in debt.

On Thursday, following months of continued declining revenue, a Utah judge converted the chapter 11 bankruptcy filing to a chapter 7 filing, affectively ordering the company to shut down, lay off all employees and cancel future events.

The abrupt closure left hundreds of engaged couples and companies scrambling to find new venues without funds and without warning.

To make matters worse, Jodi said the company did not notify them of the closures until Monday afternoon when they sent an email alerting client of the closure.

“We still wouldn’t know as of this moment if our people on Facebook hadn’t come to us and started googling it, no one from NOAH’s has directly contacted me,” Jodi said.

Pretty Princess Parties was left with less than 24-hours to find a new venue for the Oklahoma City Fairytale Ball.

Jodi said a local church saved the day and didn’t charge them to use the space. Still, upon news of the closure, ticket holders began to assume they were the ones being scammed.

“This has been a really terrible weekend for our company, I’ve had so many ticket holders emailing me, calling us scammers, that we lied to them, that they want a refund, that we canceled their event,” said Jodi. “All of these people thought that we’re changing venues on them, that we’re trying to scam them out of their money, that we’re the ones that are bankrupt, because we had no time, we had no warning from NOAH’s to try to have some type of damage control.”

Jodi’s Princess Parties make up just 35 of more than 28-hundred events that are now canceled.

In a conversation with FOX 13 – Ken Cannon, an attorney representing NOAH Corp. said, “This wasn’t how it was supposed to turn out.”

According to Cannon, NOAH Corp’s financial issues stem largely from a lack of property ownership.

“Most, or all of the venues, had rent of them which is twice their rent or more, so twice as much as what they should have been paying for them,” said Cannon.

Cannon told FOX 13 the courts hired a forensic accountant to act as chief restructure and operator for the company, he successfully negotiated down 80-percent of the lease agreements.

Still, Cannon said in the August to September timeframe of 2019, nine event centers closed. Then, from November to December, more landlords decided they ‘were not going to stick around and decided to kick NOAH’s out,’ which created more bad publicity and questions about the company.

According to Cannon, historically, NOAH Corp and the forensic accountant believed company revenue would spike come January (as the company typically sees more business and higher earnings during the January to April timeframe).

Cannon said, “The funds would allow the company to pay clients back on behalf of canceled events.”

However, months of bad publicity and issues turned January into a ‘horrible month,’ according to Cannon.

“The company and its professionals worked very hard to avoid this result. They had every intention of continuing to operate,” Cannon said.

Cannon continued, saying part of the unexpected nature of the closure can be attributed to the expectation of good revenues through the end of January, which didn’t materialize.

“The downfall was quick and unexpected,” Cannon said. “People feel terrible about it, that’s no consolation.”

Cannon said, had the company shut down in May of 2019, the company would have had to cancel 52-hundred events.

In their email, NOAH’s told clients some building owners are willing to host events. But as of now, there are 28-hundred events that have been canceled and only one company that has announced plans to take over a single Utah venue location.

“We had to take money form the bank to pay NOAH’s, NOAH’s took the money, we have to pay back the loan and we also have to book new venues,” Jodi said.

Now, without a budget and a fully booked tour -- she’s hoping for a little magic of her own.

Jodi said she knows it’s unlikely that companies will offer up their spaces for free like the church in Oklahoma City did. Still, she is trying to stay positive.

“If for any reason we can’t find a space, of course we’re going to refund people, we would never do to others what was done to us,” said Jodi. “We don’t think that’s right, I don’t care if I have to take out another loan to pay everyone back.”

Jodi asks any venues with spaces available reach out to her via Facebook.

FOX 13 asked Cannon what the chances were that people would be able to get their money back, he said ‘not good.’ He also said at this point, any impact clients will need to file a claim in bankruptcy court.