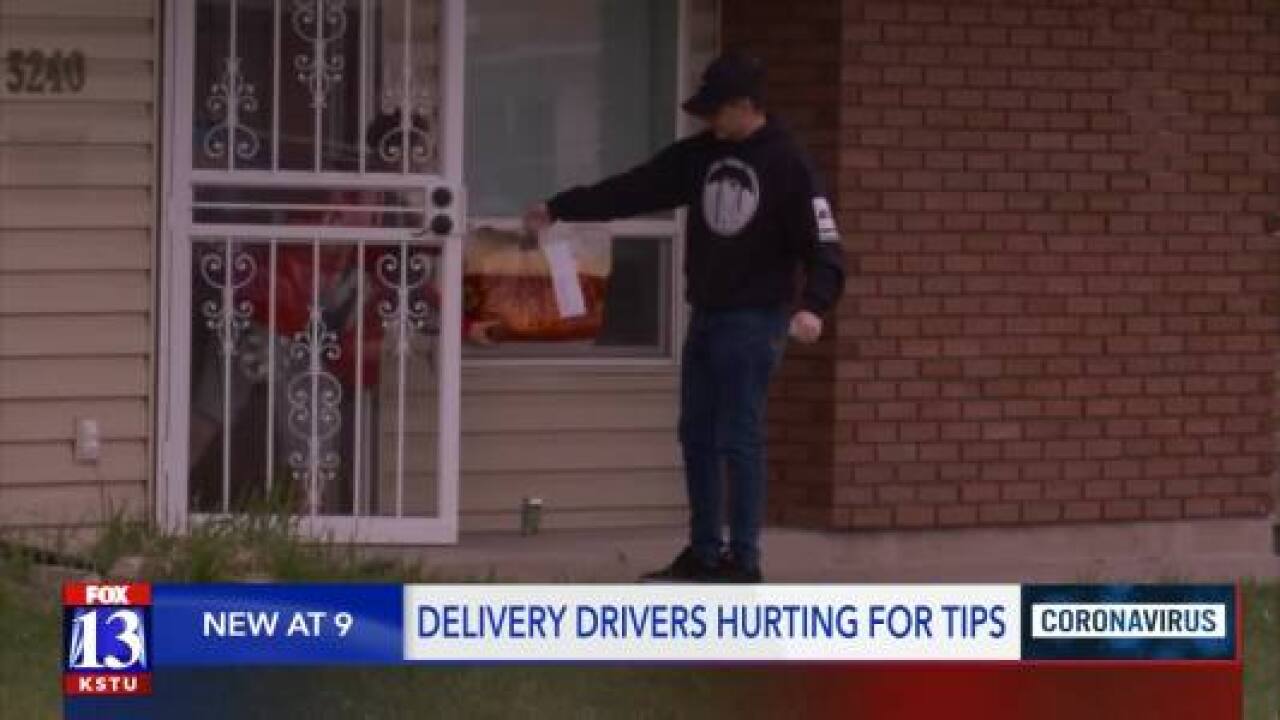 WEST VALLEY CITY, Utah – More delivery orders are coming in as people shelter in place to prevent the spread of COVID-19, but for drivers, more orders doesn’t mean more money.

“[Door Dash] sent us these gloves,” Benjamin Soto said as he rubbed his plastic-glove covered hands together.

Every day after work Benjamin spends three hours driving for Door Dash. He likes to start his shift in restaurant-heavy areas. Tuesday night, that spot was the Valley Fair Mall.

“Dash now, charged phone, enough gas,” Benjamin said as he checked off a list on the delivery service’s app.

When the clock struck 5:15, the app automatically changed Benjamin’s status to start accepting orders. In a matter of minutes, two came in.

“Alright, it’s showtime,” he said as he put down his phone and started his car.

Since people have been asked to stay home to help prevent the spread of COVID-19, this has become the new norm. Benjamin gets orders quickly and sees a lot of them.

“I am getting a lot more orders,” Benjamin said.

When he first started driving for the service in October, Benjamin said he would only complete about six trips a night and would make an average of 50-dollars (between what Door Dash paid him and what customers tipped).

Now, he sees an average of 12 orders a night but his earnings have stayed the same.

“People don’t really understand that we kind of live off of the tips, because Door Dash doesn’t pay us a lot,” he added.

The lack of tipping has gotten so bad, Benjamin has tried to make a system to decide which orders he wants to take.

“[The order] might be eight miles [away] but I’m only getting paid three dollars, that means, ‘Oh, that person didn’t tip,’” Benjamin explained. “So, I can reject it and I usually reject those.”

However, the system isn’t fool proof. Benjamin can’t see how much money the customer tipped until he marks that the trip has been completed -- then the app provides a breakdown showing how much came from Door Dash and how much the customer left as a tip.

Benjamin said he understands times are hard – but the lack of tips is making it harder, especially when being out in public can pose a health risk.

“We’re using our car and we’re risking our lives right now in this time to get them their food, so if they could just think of us a little bit and how important tip is, just like a water at a restaurant, I think that could change their mind a little bit,” Benjamin said.

FOX 13 followed along on a couple of deliveries to get an idea of how much people were tipping.

In that time, he got tips… but having the news there doesn’t hurt.

“They changed it, it was supposed to be five dollars but then they added five more,” Benjamin said. The customer had asked him why the news was there before the tip amount was changed.

Benjamin said he is not going to stop driving, he just hopes customers will keep drivers like him in mind when they order out.

“A lot of people that do this are struggling just like you might be struggling,” Benjamin said. “Just think about the tip and be generous, don’t just pay for the food and that’s it

Benjamin said he would like to see people give a 15-percent tip. The national average falls somewhere between 10 to 15-percent.