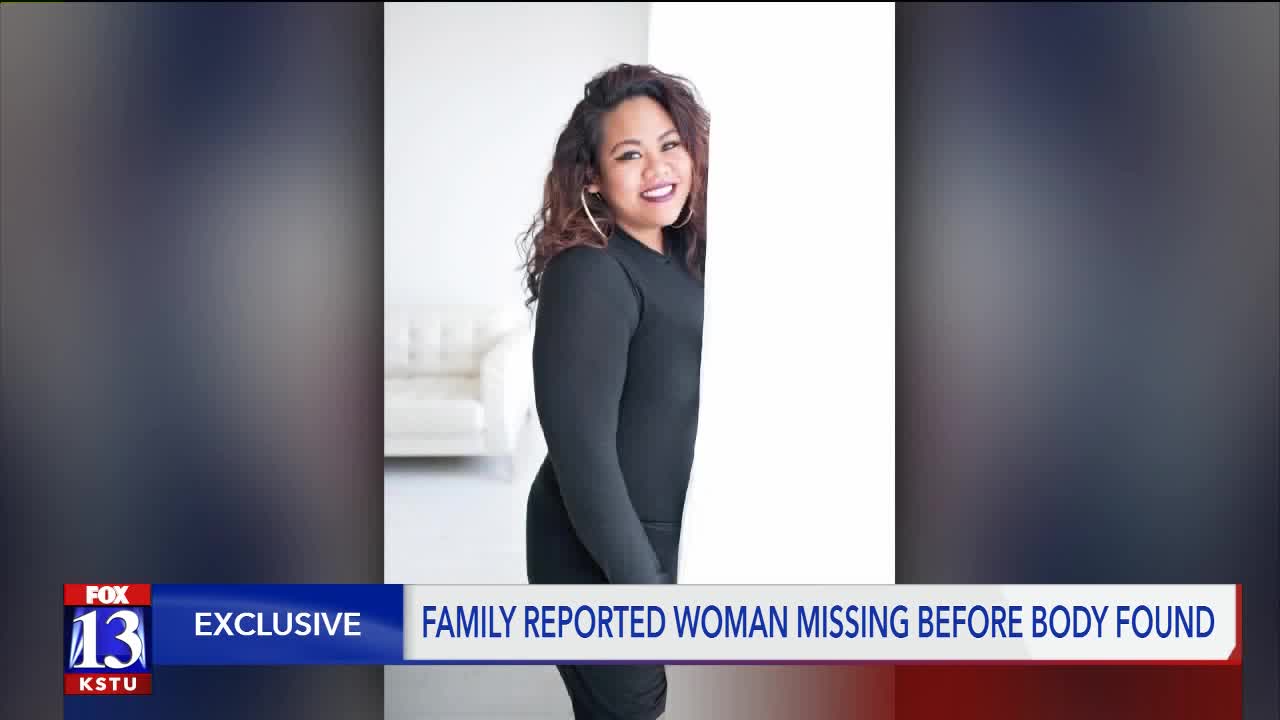 A West Jordan mother says she tried to report her daughter missing days before her daughter was found dead in Weber County.

The Weber County Sheriff's Office is calling the death "suspicious," but won't release any information or confirm the woman's identity.

On Wednesday, a law enforcement team scoured the area around where the body was found in Ogden Canyon, near the Ogden River. At one point, a dive team even searched through the waters.

She showed the last text message Chynna sent her, at 3:34 am on Mother's Day that said: "I'm on my way home."

But Chynna never showed back up to her parent's home, where she lives.

Terrie texted her daughter several times Sunday, and when she called, she said Chynna's phone was off. Terrie and her son, Sefuluai Toilolo Jr, said Chynna is always connected to her phone.

"Son says, 'Mom, you need to go find out. This is not like Chynna,'" Terrie recounted.

They called West Jordan Police on Monday to report Chynna missing but said police told her there wasn't a lot they could do because Chynna is an adult and can leave on her own free will.

Terrie explained they told her to call jails in the area, hospitals and other places where Chynna might be-- which they did, with no luck.

The family then took matters into their own hands, and began to investigate.

Terrie explained that phone records they got a hold of showed Chynna had been in contact with her ex-boyfriend, who lives in Pleasant View.

When they reached him, they said he changed his story on what happened.

Sefuluai said the ex-boyfriend at first said he never talked to Chynna, then admitted that he picked her up and drove her to his place.

"He said she took an Uber," Terrie said. "She left early in the morning, stormed out of the house."

They said Chynna's bank records proved that she never got into an Uber, because there was no bank transaction.

Terrie and Sefuluai said the ex-boyfriend has been abusive with Chynna in the past, and was recently arrested for assaulting her.

The family said they reported this to Pleasant View Police, but that police told them they still couldn't investigate or consider Chynna as a missing person.

"They still said, 'Well nothing you're telling me leads me to believe that she's in danger, so we can't open, we're not going to open up a missing person's report,'" Sefuluai said.

The family printed flyers and began to canvass the ex-boyfriend's neighborhood.

That's when neighbors spoke up.

Thanks to the missing flyer, a woman who lives near the ex-boyfriend reached out to Terrie to report she had seen a woman who looked similar to Chynna just before 5 a.m. on Sunday.

The woman, who wanted to remain anonymous, told Fox 13 she was afraid to open her door because she didn't know the woman, so she felt it was best to document what was going on.

"It was very scary," she said. "That's why I called the police and I took pictures."

The woman showed Fox 13 the pictures she took. One picture shows a police truck driving through the neighborhood, responding to the woman's call.

The woman said the officer drove around the block twice, and left.

Just a few minutes later, pictures show the garage opening and a woman standing next to a car.

Chynna's family believes the photos show her getting into her ex-boyfriend's car. They think this might be the last time anyone saw Chynna.

The woman's photos indicate that the car left and drove away.

Just a couple days later, a body was found in Ogden Canyon.

"We are following up on several leads," Weber County Sheriff's Office Lieutenant Cortney Ryan said. "And investigating the case as a suspicious death at this point."

The neighbor said she saw police search the ex-boyfriend's home extensively on Wednesday. She said the CSI vehicle was at the home.

Chynna's family just wants to know what happened to her.

And as they shared frustrations over trying to report her missing, they wonder if anything could have been done to help find Chynna sooner.

"If they would have listened to me, to us, begging... I feel like we could have found her, he would have confessed... I don't know," Terrie said. "I just feel like it would have been a different situation, outcome."

The Weber County Sheriff's Office will not say anything more around the suspicious death, except that they are asking if anyone saw anything suspicious around the 400 block of Ogden Canyon between Sunday morning and Tuesday evening.

It appears no arrests have been made or charges filed in the death.

West Jordan Police confirmed to Fox 13 they took the missing person's call, and called another agency to try to look for the person at their last known location.

Pleasant View Police have not yet responded to Fox 13 about their investigation.