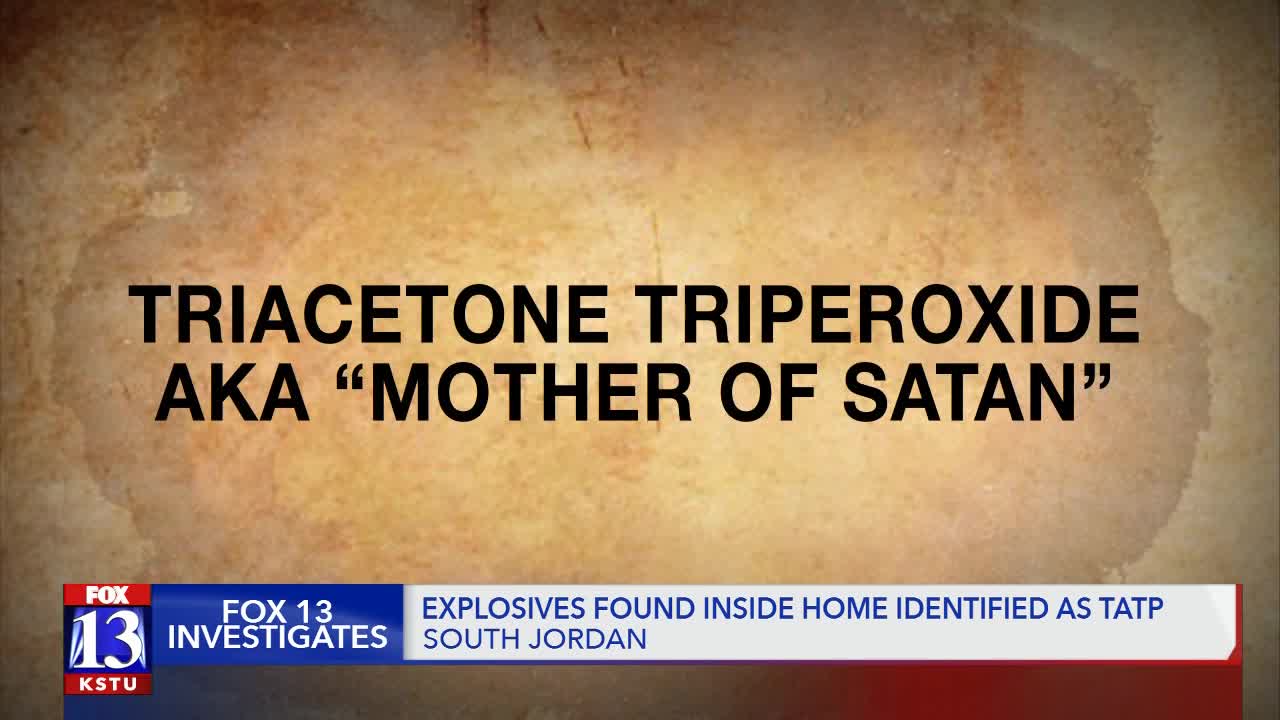 A FOX 13 investigation has revealed that the deadly explosives found inside of a man’s home in South Jordan last week are the same types of materials that been used by terrorist organizations for years.

SOUTH JORDAN, Utah — A FOX 13 investigation has revealed that the deadly explosives found inside of a man’s home in South Jordan last week are the same types of materials that have been used by terrorist organizations for years.

Police say 42-year-old Ryan McManigal shot at officers last week and had so many explosives in his home, the FBI had to evacuate a large blast zone for controlled detonations.

Multiple law enforcement sources have confirmed with FOX 13 that the explosives were identified as “triacetone triperoxide,” also known as “TATP” or “Mother of Satan.”

Greg Rogers, a retired special agent with the FBI, said he used to handle TATP frequently as an undercover agent who infiltrated local militia groups.

“The last 20 years I was working, I was undercover,” Rogers said. “It was very common in the militia movement. TATP was — it was just was a favorite.”

TATP is very volatile, which is likely why the explosives had to be detonated inside the suspect’s home.

Rogers said he learned it can be especially dangerous in the hands of an amateur.

“One of my favorite bomb technicians told me. He said, ‘You know, Greg, uh, building bombs with a bunch of idiots is a bad idea!’” Rogers laughed. “So yeah, it makes you nervous. It’s part of the job, and that’s what you do.”

Officers who responded to McManigal’s home said they were already on edge when the suspect started firing at them with a rifle. Police said McManigal told them he surrendered once his gun jammed.

The suspect seemed to be upset at Culver’s, a fast-food restaurant across the street from his home.

“Ryan claims that Culver’s is harassing him and harassment is the reason mass shootings occur,” police wrote in their report. “Ryan asked the business owner in the text messages how he would feel if Ryan entered the business and mowed down customers and staff.”

Police said they also determined McManigal had shot out a $1,500 street light in his neighborhood.

McManigal sometimes posted disturbing messages on his Facebook page, seeming to be very concerned about being the subject of surveillance.

“It’s looking like I might get into a confrontation tonight because I’d rather die then live my life on my knees,” McManigal wrote on July 17. “July, if they succeed in silencing me, I don’t have a Will written but I named you as my beneficiary.”

Officers with the South Jordan Police Department confirmed they made various preparations before serving McManigal with a search warrant due to the potential for violence.

“There are some issues, probably mental illness issues,” Rogers said.

Crews later realized after the shooting that the dangerous situation was not over — for them or the rest of the neighborhood — when they discovered the TATP.

More than 150 homes were evacuated while the FBI performed controlled detonations.

“Everyone was supposed to be celebrating Pioneer Day, and then just hearing that your house could explode? That’s kind of weird,” said Grayson Woodward, who lives nearby.

Investigators are trying to confirm whether McManigal acted alone. It’s unclear what he planned to do with the TATP.

“They had to be careful,” Rogers said. “They don’t know this guy. You don’t know how talented he is.”

McManigal was booked on more than 20 charges related to the officer-involved shooting, but he has not yet been charged for the explosives.

Rogers told FOX 13 one of the groups he took down in his time as an undercover agent planned to use TATP to explode government buildings in preparation for a doomsday prophecy in 2012.

“Most of the militia groups I were in were very devout (fundamentalist) Christians, so they wouldn’t want to admit they were making something called ‘Mother of Satan,’” Rogers said. “It’s very very popular in Al Qaeda. It was used a lot in roadside bombs.”

Rogers said he first learned of TATP from a case in 2001 known as the “shoe bomb” attempt.

Richard Reid, an Islamic fundamentalist, stuffed TATP into his shoes and boarded a plane. He was able to make it past metal detectors, which were not as advanced at the time. The explosives did not go off as planned.

“He walked right onto a plane, walked through scanners, did everything else with his shoes full of It. You couldn’t do that now, but you could then,” Rogers said. “That’s why TATP was so popular for a while. That’s not true anymore.”

The Director of National Intelligence keeps track of TATP explosions.

Click here to view the full document pictured above.

In 2015, terrorists used TATP as part of the Paris bombings, the deadliest attack in France’s capitol since World War II.

In 2018, an apartment full of TATP exploded in Beaver Dam, Wisconsin, killing the man in charge of his own homemade lab. Investigators found “white supremacist” materials inside the suspect’s home, but were unable to determine an official motive.

“We have found out about a number of manufacturers because they’ve harmed themselves, blown themselves up,” Rogers said. “It makes a nasty, nasty bomb.”