FOX 13 Investigates: LDS Church urges leaders to not participate in ‘any type of court case’ 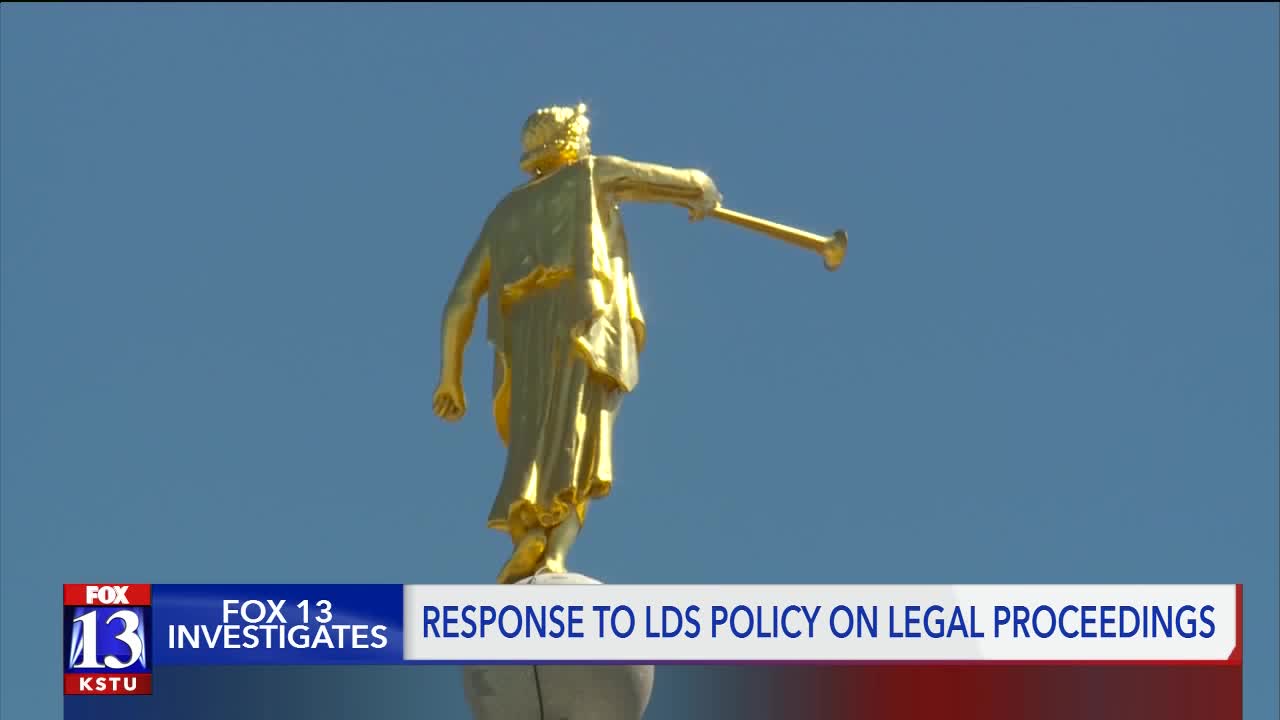 SALT LAKE CITY — Members of the Church of Jesus Christ of Latter-day Saints are questioning a letter that was sent to leaders last week reminding them of a policy that prevents them from getting involved in “any type of court case” without speaking first to the Church.

The letter, dated August 4, 2020, was addressed to leaders in the United States and Canada. It was signed by members of the First Presidency.

“We remind leaders and members of a long-standing policy that Church leaders should not involve themselves in civil or criminal cases regarding members in their units, quorums, or organizations without first consulting with Church legal counsel,” the letter reads. “However well-intentioned, Church leaders sharing information in legal proceedings can sometimes be misinterpreted and even damaging. Following the Church’s policy also keeps the Church from being inappropriately implicated in legal matters.”

When FOX 13 reached out to the Church for clarification on the letter, a spokesperson indicated the policy exists to dissuade leaders from being involved in legal matters.

“(The Church) would encourage them not to get involved,” said Sam Penrod, a media relations manager for the Church. “That’s the whole point, is that local leaders shouldn’t get involved in any type of court case."

FOX 13 asked if leaders of the Church would still be discouraged from responding to a subpoena if they have information related to a case.

“I can’t speak to that,” Penrod responded. “They just don’t want the Church involved.”

“To have the Church put out a statement like this… I’m really concerned about it,” sighed Joanna Smith, an active member of the Church. “If we’re going to be a church and not a corporation, we should be telling the truth in everything we say and do, just like our teachings teach us to.”

Smith said she is not afraid to speak up against Church policies that trouble her, even if that means disagreeing with the Latter-day Saint president and prophet Russell M. Nelson.

“I have been called ‘less of a Mormon’ multiple times over my life. Mormonism is in my blood. It’s who I am. I will always advocate for it to be better. I am Joanna Smith because I’m a literal descendant of Joseph Smith,” she said. “Religions in the US should not be interfering with legal proceedings. A statement like this puts the prophet above the law… Our prophet doesn’t need to be telling us when we can tell the truth and who can we tell the truth to.”

“Policies like this were a huge part (of) getting me out,” said Annie Jardine, a former member of the Church. “I think it’s very clear what their priorities are… I don’t think they’re within their rights to say, ‘No, you can’t do that. ‘”

Doug Andersen, a spokesperson for the Church, released the following statement to FOX 13.

“A letter from the First Presidency, dated August 4, 2020, was sent to local lay leaders worldwide, reminding them of the Church’s long-standing policy of seeking advice from Church legal counsel before becoming involved in criminal or civil proceedings related to members of their congregation,” the statement reads. “This policy is intended to help leaders in their ministerial role to all those they serve, by not appearing to take sides in legal proceedings and to avoid implicating the Church in legal proceedings to which it is not a party. This policy is included in the General Handbook and similar notices have been sent in recent years to reinforce this policy.”

Experts say the implications of this policy could have an effect on legal proceedings across the country.

Ronald Zambrano, a California attorney with West Coast Employment Lawyers, said religious organizations are “basically non-profit corporations” who are well within their right to have policies requiring members to consult legal counsel.

He also said the Church has a right to follow its own disciplinary process if someone chooses to ignore policies.

“It can be as extreme as ex-communication. That is much much worse than losing your job from a personal and spiritual standpoint absolutely, but it’s legal for them to do that. It may not be ethical or moral or the right thing to do,” Zambrano said. “This is no different than any corporation that has its image.”

However, Zambrano said he had grave concerns about any sort of blanket policy that might exist behind closed doors that would prohibit leaders from testifying or responding to a subpoena.

“That would be an obstruction of justice, to willfully not participate in the investigative process of a crime,” Zambrano said. “This is no different than the culture of silence that led to the abuse of these kids in the Catholic Church… It’s a form of coercion. It’s a form of imposing duress on people. It’s a danger to our society.”

“These are not employees. They are members of a religious organization,” Anderson wrote. “Also, they are being told to call the church’s counsel before speaking to authorities or others about a civil or criminal matter, regardless of whether it related to their position with the church. The policy seems designed to cause dangerous delays, cover-ups, and perhaps obstruction of justice…. Listen to our lawyers instead of your conscience or your duties to the community, victims, or the truth?”

Zambrano said there are laws to prevent corporations and religious organizations from being allowed to punish members for responding to a subpoena.

“If someone were to participate in subpoena because they felt it was the right thing to do, and your employer fires you for participating in the subpoena, you would have retaliation claims under various federal and state statutes,” Zambrano said. “In the Church context, it’s a little different. There (are) protections for being punished for engaging in the judicial process. It’s not as clear cut and the remedies are a little bit different because you can’t really force the Church to take you back for being excommunicated.”

In an email sent to FOX 13 on Thursday, Andersen responded to a question regarding what would happen to a leader who does not follow the policy.

"The Church acknowledges agency," Andersen wrote. "As such, policy adherence is not compulsory. These are volunteers, part of a one-of-a-kind ministry, just trying to do their best."

Steven Paul, a Utah attorney and member of the Church, said he was not aware of the policy until he received the letter via email, but he did not take issue with anything outlined in the message.

“It made sense to me,” Paul said, indicating that many local Church leaders might not be educated on legal matters. “It doesn’t state (not to) participate in legal proceedings. It says, before you participate, communicate with the Church legal department.”

Paul said he does not speak on behalf of the Church, but he believes there is never anything wrong with getting legal advice.

“That’s good advice for any company. Any business,” Paul said. “I don’t think (the policy) is asking for permission. I think it’s consulting… It is a good benefit, and they are good lawyers who have good resources. I know several people over there.”

Paul said he has faith that the Church will make fair decisions on a case-by-case basis.

“I think the organization has been under attack throughout the centuries,” Paul said. “I think the Church certainly has an interest in protecting its leadership. To protect those local leaders, I think, is foremost in their thought process as opposed to protecting themselves.”

This letter was sent the same day a judge ruled that Chad Daybell's case would move forward to trial.

Some say the policy is unethical. Some say it's sound legal advice. Others say it borders on obstruction of justice, potentially impacting cases across the country. https://t.co/ZO1beqNfWS pic.twitter.com/21GR7PsOK0

Penrod did not indicate why the Church sent out the reminder on August 4, 2020.

Some were quick to notice the letter was sent out the same day an Idaho judge ruled the case against defendant Chad Daybell would move forward to trial.

Daybell is a Latter-day Saint author accused of having extreme religious beliefs.

In June, investigators found the bodies of seven-year-old JJ Vallow and 16-year-old Tylee Ryan buried in his backyard.

The two children, whose mother recently married Daybell, had been missing from Rexburg, Idaho since September 2019.

Lori Vallow is also facing criminal charges related to the death and disappearance of her children.

“I firmly believe that it is connected to the Daybell/ Vallow case,” Smith said. “It will affect that case. In Idaho you have such a large percentage of Mormons. The list of people testifying on that case – it’s pretty much all Mormons! It will absolutely have an impact on that case... you have multiple family members who have sounded the alarm for a long time. The red flags on that case could light up a city.”

“It’s very convenient that they just put a reminder out there at this time,” Jardine agreed.

After the initial publication of this story, an Idaho attorney representing Lori Vallow released a detailed statement to FOX 13, accusing the Church of creating a "code of silence."

Jennifer Joyce, a spokesperson for Madison County Prosecutor Rob Wood, said Wood does not believe the Church letter relates to his case.

"The letter will have zero effect on any work done in the Madison County State Prosecutor’s Office, including on the Daybell / Vallow case," she wrote in an email to FOX 13.

Zambrano said he was not familiar with the case, but he hopes the Church does not discourage anyone from responding to a subpoena.

“I do believe that the welfare needs of the Church are probably increasing because of the pandemic,” Paul speculated. “It could be a way for the Church to express a reminder.”

Many believe the policy will have a direct impact on this case. Some believe that's exactly why the Church sent out a reminder last week.https://t.co/fB3L1hb4lW

Although the letter was only addressed to Church leaders, Smith expressed concern that the policy could set an example that trickles down to all members.

“Too many members are going to read this and say, “Well, I can’t testify!’” Smith said. “I think if a member gets subpoenaed, certain members will have soul searching to do. It will no longer be an automatic yes, and that is what worries me.”