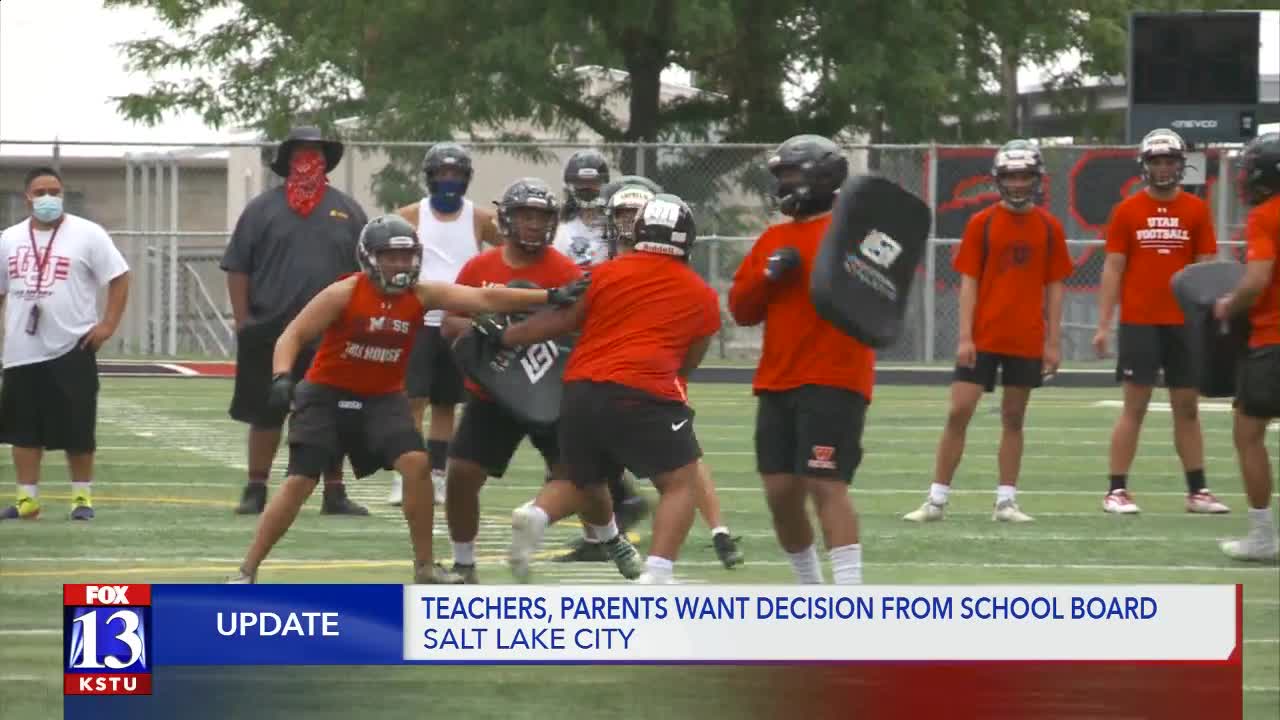 The frustrations come after a contentious debate Tuesday, when the board ended their meeting with no plan for fall-- except for pushing back the start date to Sept. 8. They talked about reconvening in August for the vote.

Now, parents and teachers are stuck not knowing if class will be all online, all in person, or a mixture between the two.

According to West High Principal Jared Wright, some students might try to transfer schools and some teachers may even leave their jobs depending on what the board decides.

"Football will take care of itself," parent Nephi Toafe said. "I'm more concerned about the classroom, especially because he's a freshman."

Nephi said his oldest son didn't do so well with online learning in the spring. His two younger children also came up against challenges that made it difficult for them to learn.

Nephi expressed concern for his son starting high school for the first time, and potentially having to do it all online.

He tuned into the the Salt Lake City School Board meeting Tuesday evening, hoping to hear a decision.

Interim Superintendent Larry Madden presented the proposal: Hold class all online until October 30, and then reassess after that.

Board members debated the proposal, some saying they want to give parents a choice of online or in-person.

Ultimately, they pushed back a decision until August, giving parents and teachers no direction.

"They're really frustrated," said West High Principal Jared Wright, of parents. "And I'm frustrated that a decision hasn't been made yet."

He explained that not knowing makes it hard for teachers to prepare their curriculum for fall.

Wright is also hearing that if Salt Lake City goes all online, students may try to switch high schools to one in a different school district that is allowing in-person classes.

"Hearing from other schools, there are waiting lists from our students trying to leave West High," he said.

For example, he said students living in the far northwest quadrant of the district could try to attend Woods Cross High School instead.

On the opposite end, he's hearing that some teachers may not come back this year if the board fully reopens the schools.

"If they're going to be forced to come to work and they are immuno-compromised or have some of their concern, they might be forced to retire or resign," Wright said. "We need to know that. They need to know that, so they can make a choice. This really, for me, does boil down to decisions."

Wright indicated that parents he's spoken with would like to be given a choice of in-person or online learning. If they don't feel safe sending their student to school, then he explained it's important to let students stay home.

But if a parent or student feels strongly about the student coming to class, he said they owe it to them to offer that option, if possible, and to follow safety regulations so they aren't put at risk.

Wright indicated that they came up with a plan he was confident in for West High, on letting students back to school safely. He talked about cutting the number of students allowed at school at one time down to one fourth of the 3,000 enrolled students.

He said they would keep everyone socially distanced and safe.

Nephi said he's hoping for blended learning, so that his three kids can experience a hybrid of attending class in person and online.

Either way, he wants a decision soon so his family can get ready for it.

"The sooner we have an understanding that what we need to do, the better," he said.

Whatever the decision is, Wright said they will accept it and do their very best to bend over backwards and support teachers, counselors and support staff.

"Whatever the decision is for our format, I have complete confidence in the teachers in the Salt Lake City School District that they're going to make it work as best as possible," Wright said, adding, "I have no doubt in that."