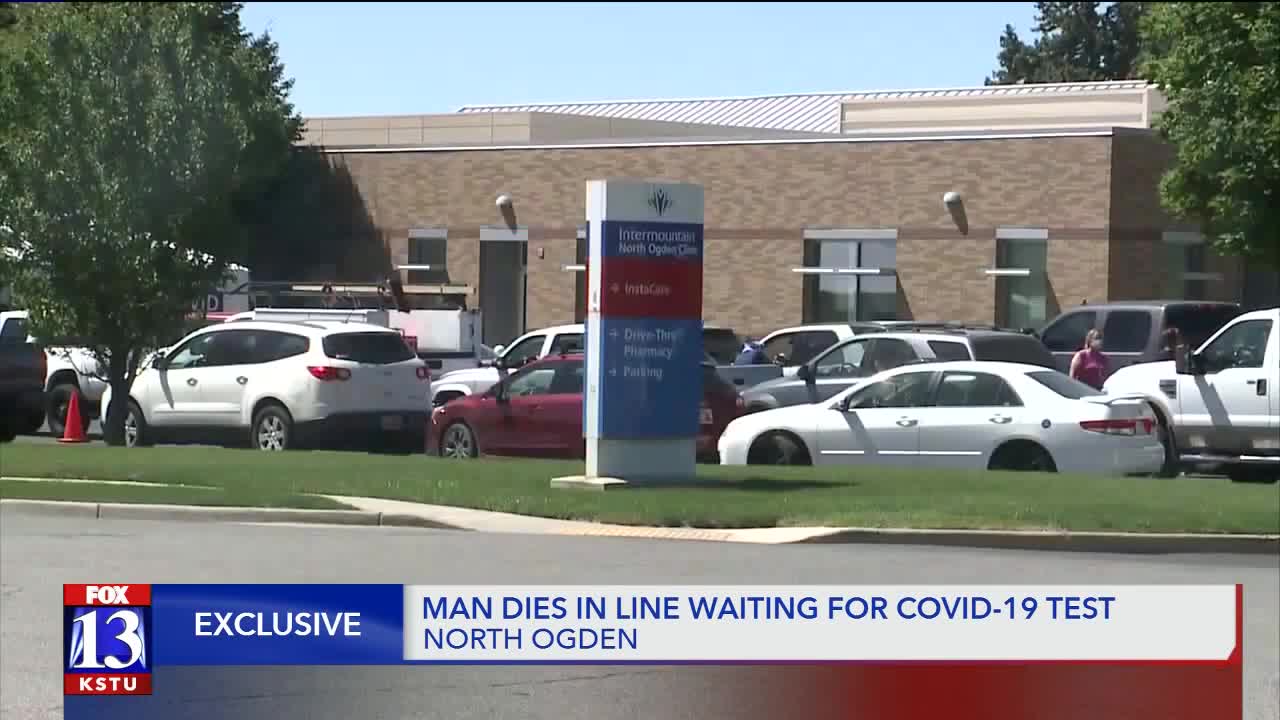 Intermountain Healthcare officials say caretakers from a nursing facility brought a patient to a COVID-19 testing site on Sunday, but upon arrival found that the patient was dead.

NORTH OGDEN, Utah — A 71-year-old man was found dead in the parking lot on Sunday while waiting for a COVID-19 test at the Intermountain Healthcare clinic in North Ogden.

Officials with Intermountain said a driver and caretaker from a nursing facility brought the patient to the testing site, but by the time they arrived to the front of the line found that the patient was dead.

"When the nursing facility’s van reached the drive-thru testing tent, their patient was unresponsive, cold to the touch, and likely deceased," a statement from Intermountain read. "The testing-site caregivers immediately called 911 but EMS workers could not revive the individual. Caregivers acted quickly and followed correct procedures. The testing center was fully staffed and there were lower testing volumes."

The name of the patient has not been publicly released.

Erin Goff, a spokesperson for Intermountain Healthcare, said she was unsure how long the patient was waiting for his COVID-19 test.

Testing lines on Monday were very long, with dozens of cars spilling out onto 2300 North because they did not fit into the clinic's parking lot.

Neal Berube, the mayor of North Ogden, is also a member of the Intermountain Healthcare Board of Trustees. He told FOX 13 he did not want to speak on behalf of the hospital, but called his initial reaction to the case "alarming" as he awaits more information.

"It seems like it was quite sudden," Berube said. "The line is quite long which I believe is the case at most testing facilities today... the waits could be up to several hours long."

"Cardiac respiratory arrest is when you have no heartbeat and you’re not breathing on your own," Jones said.

It's too early to say how the 71-year-old patient died.

Jones said cardiac respiratory arrest can be caused by a variety of medical reasons, including a heart attack or complications from COVID-19.

"We don’t diagnose in the field," Jones said. "Our job is to just treat the symptoms that we see and the signs that we see. We don’t make any diagnosis."

Mayor Berube said he believes the patient was seeking a COVID-19 test to prepare for an upcoming surgery.

"I think until an autopsy is performed, we probably shouldn’t jump to conclusions," he said. "It would be very unfortunate to try to place blame on what happened here... the anxiety, the fear that’s present in our community, it just gets compounded when we jump to conclusions."

FOX 13 asked if there are currently enough staff at Intermountain Healthcare to handle the number of patients.

"Safety of patients and the community is number one. I believe that if additional resources are identified then Intermountain Healthcare, following their values and their mission, that they would make sure resources are there," Berube said. "Any given day, you don’t know how many patients are going to show up to get tested. It’s not a pre-scheduling situation."

Berube said he hopes this story helps people understand the need to be prepared with plenty of fluids and patience if they go to a testing site this summer.

"People are fearful," Berube said. "They want to know, and they want to get quick results. So they’re faced with two things, right? They’re faced with waiting in a line that could be several hours – and of course the type of testing that’s being performed generally by Intermountain takes 72 hours to be returned because of its accuracy."

Intermountain reminds the public that "anyone who is seriously ill should call 911 for help or go directly to a hospital emergency room, not to a COVID-19 drive-thru testing center."

FOX 13 is working to gather more information and will update this article when more details are available.