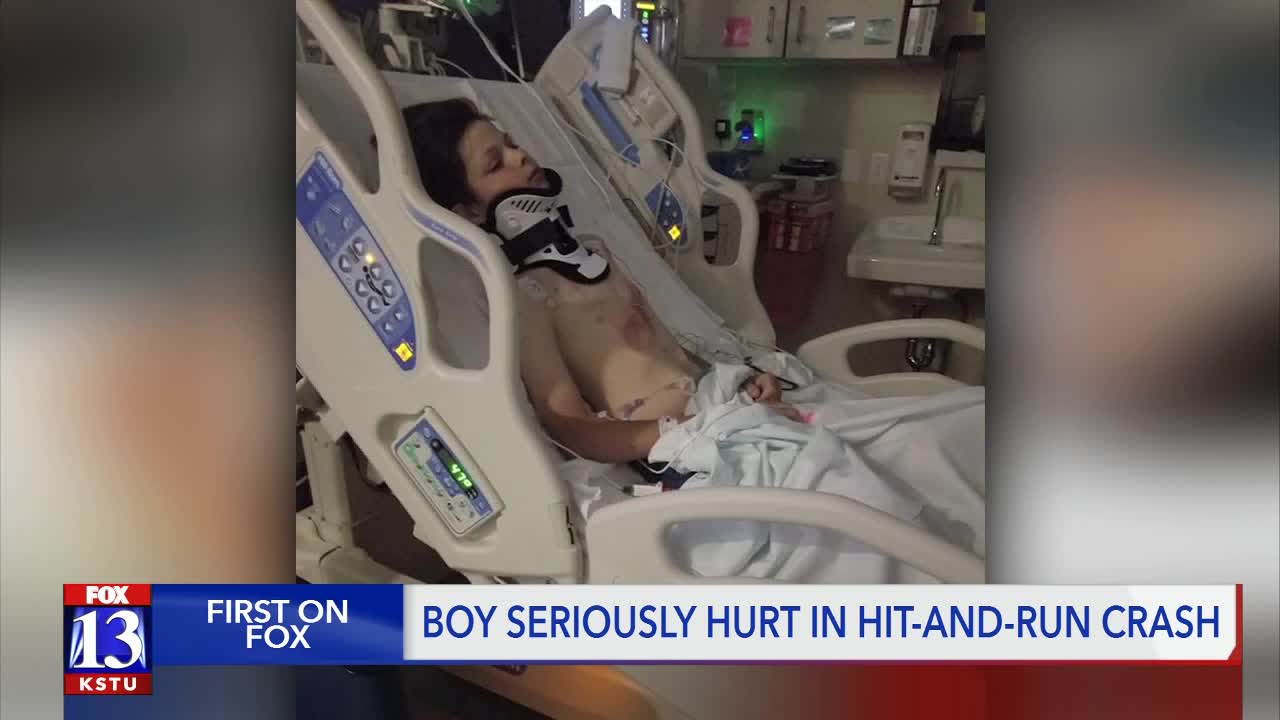 Ogden Police are looking for a suspect who they say ran over two kids riding scooters last week.

OGDEN, Utah — A Washington Terrace family wants to know who hit teens riding scooters in Ogden, then sped off. The incident sparked an Ogden Police investigation, and police need help identifying a suspect.

The hit-and-run sent 13-year old Edan Rynes to Primary Children's Hospital. Just before the driver hit him, Edan said he'd been at the skate park with his older brother and a friend.

Without class in session, that's where Edan likes to hang out.

"I've been scootering a lot," he said. "I've progressed pretty fast." He loves to do tricks on his scooter, and said he spent the whole day there Thursday.

After leaving the skate park, he said the three of them stopped by Smith's to get snacks.

From there, Edan hopped back on his scooter and the trio continued down Harrison Boulevard in Ogden. The sidewalk ended, so he said they stayed in the shoulder.

Suddenly, they heard a truck hit the guardrail about 100 feet behind them. Edan's 15-year old brother yelled at them to jump over the guardrail.

"And next thing you know I saw his headlights," Edan recounted. "And I get hit, and I'm knocked out. Wake up, my teeth is missing. And then my hip hurts, and my ribs."

Sherry Rynes, Edan's mother, described how her son broke 6 ribs, broke bones in this foot, injured his hip and had multiple teeth knocked out. She got a call that her son was in the hospital, and his injuries were so severe that he needed to go to Primary Children's.

"Seeing him laying there, with his body already bruised up and scratched-- it was hard," she said.

She said he underwent surgery on his hip and his teeth were replaced. Sherry is angered that the driver drove off, and didn't even check to see if Edan was alive.

"How can you just hit somebody and then drive away, knowing that you did that?" Sherry asked.

"I don't get why he would just hit us and go, instead of stop and check on us," Edan said.

Now, Edan can't visit the skate park anymore. He said the doctors told him that recovery will be at least 6-8 weeks. He's in a lot of pain.

"It hurts to take big deep breaths," he said. "It hurts a lot sometimes."

Sherry is just hoping that someone will be able to help identify the driver, so that this person can held accountable.

"Angers me and makes me sad at the same time," she said. "Because now my son has got to sit here and to suffer, while this guy is out running around."

Edan's 12-year old friend was also hit by the truck, but he and Ogden PD said the friend wasn't as injured and didn't need to go to the hospital.

Police believe the vehicle was a red or maroon Mazda pickup with a smashed right headlight, and damage to the right front grill, right front panel and side.

Anyone with information is asked to call 801-629-8235 or email traffic@ogdencity.com.

A GoFundMe has been set up to help Sherry with Edan's medical bills. Click here for more information.