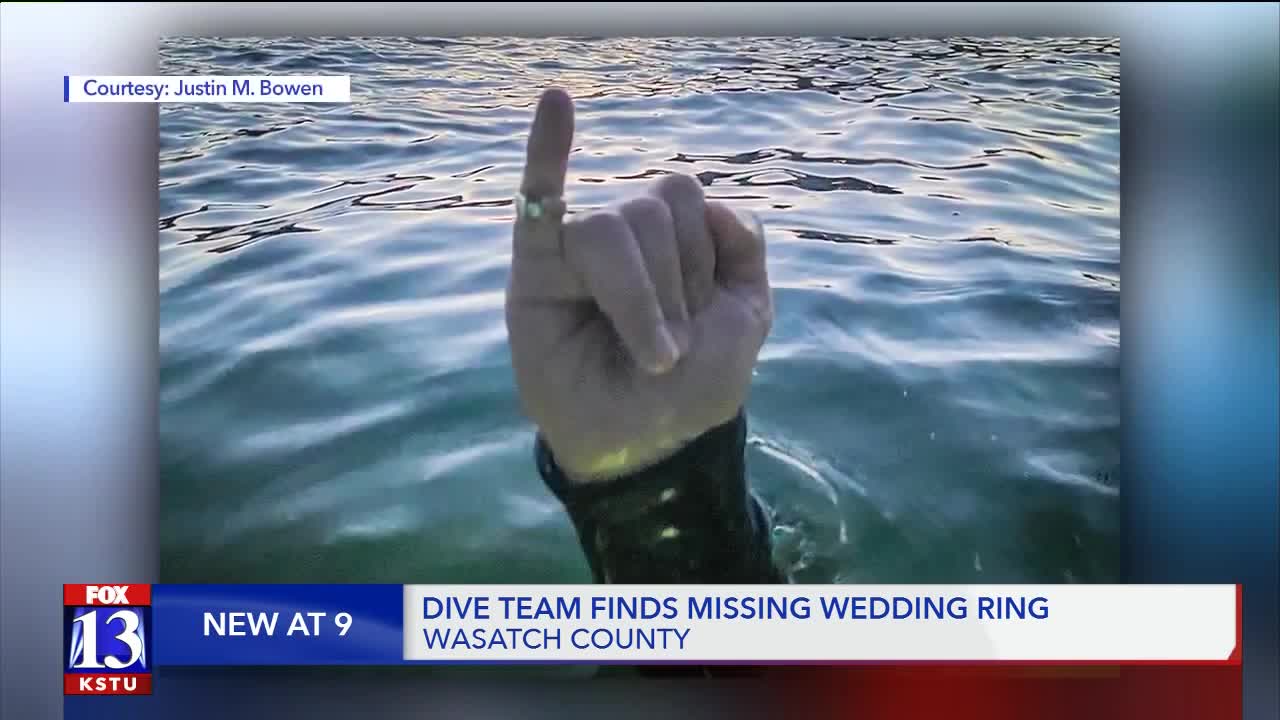 A Midway woman is thanking her local search and rescuers after they dedicated their own time, to find a family heirloom at the bottom of Deer Creek Reservoir.

WASATCH COUNTY, Utah -- A Midway woman is thanking her local search and rescuers after they dedicated their own time to find a family heirloom at the bottom of Deer Creek Reservoir.

“Here it is!” Lindsay Bowen said as she held up her left hand. “To have it on my finger again felt so good.”

Staring at her wedding ring, Bowen is still in disbelief.

“I was so shocked, I kind of had just counted it as a loss and, if anything, we were just grabbing at straws trying to find it,” Bowen continued.

Rewind two weeks, Bowen and her family were playing on a floating obstacle course at Deer Creek Reservoir.

“We were just out there playing and it slipped right off,” Bowen said. “I knew it just dropped, and it was probably 15 to 20 feet deep.”

Losing her ring had turned into a real life treasure hunt.

“Someone’s going to find it and take it,” she said.

But to Bowen, the ring wasn’t just rich in value, it was rich in sentiment.

“I’ve had my ring for 18 years,” said Bowen. “It’s my grandmother’s diamond and my husband designed it, I realized it held all of my babies and I was just so sad it was gone, I didn’t realize how much I loved it.”

After her husband made multiple failed attempts to retrieve the heirloom, Bowen turned to a Facebook community group.

“If anyone has the equipment, if anyone can go down, I’ll pay you a hundred dollars.”

Then, unlikely heroes with Wasatch County Search and Rescue’s dive team saw her post and answered her call for help.

“They went out for two hours and dove on their own time. They’re volunteers, and they just dove and dove and they couldn’t find it,” Bowen explained.

Still, they didn’t give up hope. Eight days, two dives, an underwater metal detector and a half dozen search and rescue volunteers later, they found it.

“Are you serious!?” Bowen's husband can be heard yelling in a cell phone video of the recovery.

“Yeah, we got it!” a rescuer shouted back.

The long lost ring was found using a golf ball and a metal detector. The divers dropped the ball in the general area where it was lost, then used the metal detector to find it.

“I started crying,” Bowen said. “[The diver] came up and it was on his pinky finger and he was so excited!”

Bowen said the divers would not accept her reward. Still, she believes everyone came away with something valuable that day.

“They were just happy to help and I was just so happy to be in a community that takes care of each other like that,” Bowen said. “That memory for me, of people doing good and being recognized for good, I think that’s my favorite part.”

Bowen said the divers continued to use the metal detector in the water, retrieving a number of Apple Watches and iPhones, which they were able to return to their rightful owners.