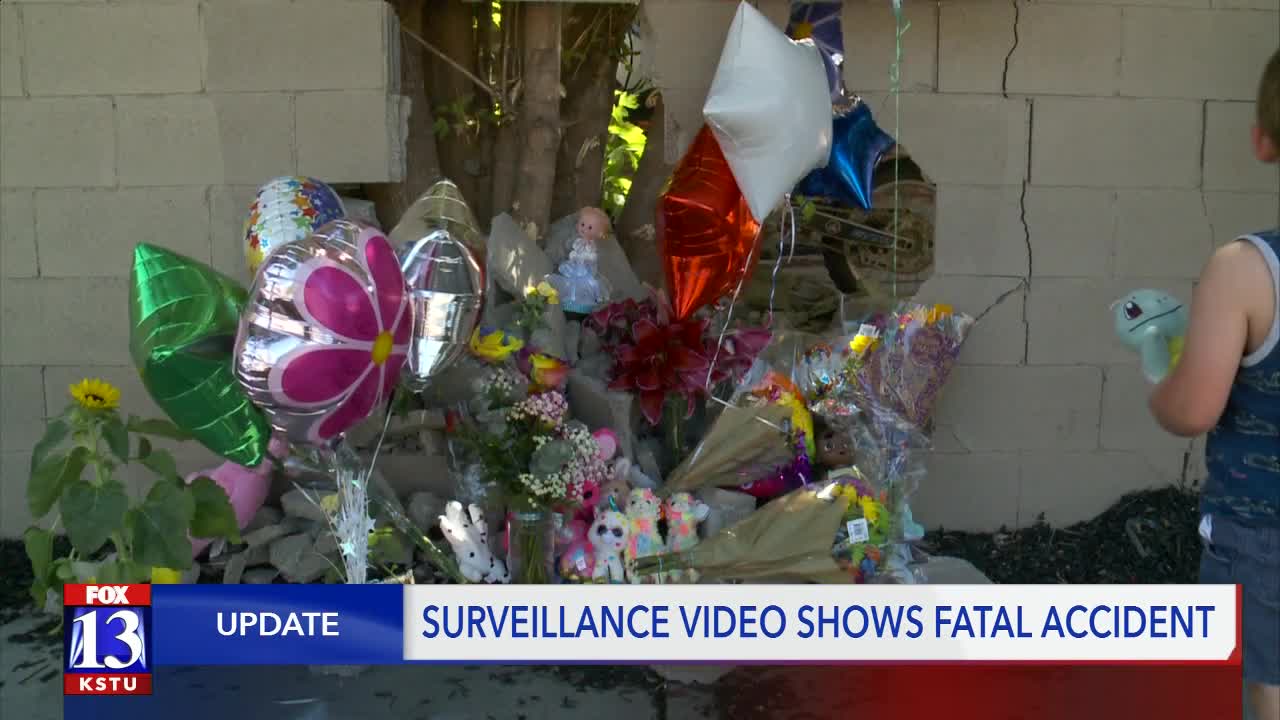 TAYLORSVILLE, Utah — Surveillance video from a neighbor’s home shows the tragic accident that claimed the life of a toddler and sent her mother and twin sister to the hospital in critical condition; a memorial now grows at the crash site.

With heavy hearts, tears and prayers, a steady flow of area residents came to the area of 5088 South and 3200 West, to pay their respects in-front of a makeshift memorial.

“Go ahead and put the stuffed animal down,” a woman told a little boy as he set down a stuffed turtle.

Just 24-hours prior, a tragic chain of events took place in that very spot -- claiming the life of a 2-year-old little girl and sending her mother and twin sister to the hospital in critical condition.

“It’s amazing how things can…” the woman said as she took a deep breathe, choking back tears, before kissing the little boy on the cheek a few times.

For the small Taylorsville community, the memorial speaks volumes. Balloons, flowers and toys now sit in the rubble and fill the large hole in a cement fence.

“It’s so sad and tragic, it reminds you how short life is,” Olsen continued.

A neighbor’s surveillance video captured the entire incident. In the upper right hand corner, you see a woman pushing her 2-year-old twin girls in a double-wide stroller. In the upper left, you see the dog that caused the accident running around in the street.

Fast forward 40-seconds, you see the woman with the stroller stop and the dog runs out into traffic.

A driver in a gold car heading North on 3200 West sees the dog and slams on the brakes – at that point a white pickup truck slams into the back of the gold car, launching it into the sidewalk where it hit the woman and her stroller into the cement wall.

Seconds after the collision, you can see neighbors running to help, but for one of the little girls in the stroller, it was too late.

The other little girl was airlifted to Primary Children’s Hospital and the mother was taken by ambulance to Intermountain Medical Center.

“I saw the vehicle that was over here, the bumper, the wrecked vehicle, the stroller… everything,” Olsen said. “I think it’s just surreal.”

Now, pink and white sparkly ribbons and tied throughout the neighborhood, as strangers and friends continue to stop by the memorial.

“Life’s too short, you’ve got to appreciate it while you can,” said Olsen.

According to Unified Police Department, an investigation is underway – however, it could be weeks before they know if either of the drivers will face charges.

The mother was treated at the hospital and was released on Wednesday, at her request, so she could be with her surviving daughter. The daughter remains in critical condition.