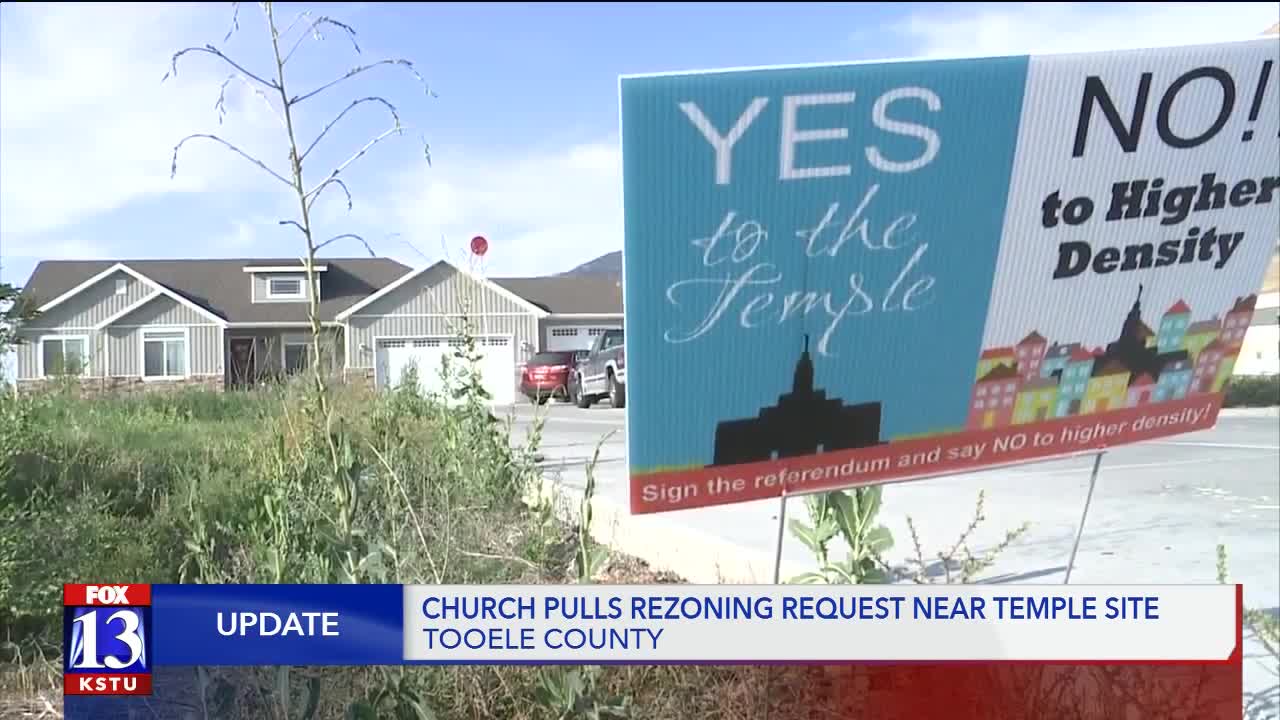 A referendum over a proposed Church of Jesus Christ of Latter-day Saints temple has enough signatures to make it on the ballot, but it might not need to after the Church made a surprise announcement Tuesday.

ERDA, Utah — A referendum over a proposed Church of Jesus Christ of Latter-day Saints temple has enough signatures to make it on the ballot, but it might not need to after the Church made a surprise announcement Tuesday.

The Church decided it would pull the rezoning application, one day after referendum sponsors turned in more than enough signatures to leave the issue to voters.

On Tuesday evening, Meredith Mannebach dumped a bucket of feed over a fence into an empty bucket on the ground for her two pigs to gobble up.

They squealed with satisfaction. One of her cows joined in on the evening feast.

Being able to own farm animals on her 5-plus acre property is why Mannebach likes living in Erda.

"We want to live this lifestyle. We want to be more self-sufficient," she said.

Ryan Sorensen would have had a view of that development from his home in Erda.

"Minus the trees, it would have been right there," he said, pointing through trees to a field.

He explained that the issue of the development around the temple has created tension in their tight-knit community.

"It's been pretty divided," Sorensen said.

People, taking sides, posted signs on their front lawns for and against the development.

Some liked the idea of a walkable community with parks and open space, a 55+ adult housing community, and smaller plots of land.

Sorensen and Mannebach did not like that idea. They supported the referendum to let voters decide whether they wanted to rezone the land to allow for higher density housing.

All the signatures were due on Monday.

"I think everybody was sitting with bated breath, going, 'Are we going to get there?'" Sorensen said.

They did — with signatures to spare. Still, they were waiting for the end of the one-week period where people can still request to remove their names from the referendum.

Sorensen and Mannebach wouldn't have to wait a week, because one day later the Church of Jesus Christ of Latter-day Saints put the debate to rest.

The Church sent a statement to FOX 13 Tuesday, confirming it will withdraw the application for the rezone, but continue with plans to build the temple.

"We acknowledge the efforts of those who have raised questions and sincere concerns about the Tooele Valley Temple project, including the residential development surrounding the temple. There is a sincere desire on the part of the Church to avoid discord in the community," said the statement, written by the First Presidency.

The Church previously told FOX 13 that both developments were closely tied together, and a referendum against the development could significantly delay or alter plans for the temple.

It remains to be seen what will end up surrounding the temple in the future instead.

"We look forward to working with local officials and community members to determine next steps to move forward with the construction of the temple," wrote the First Presidency of the Church of Jesus Christ of Latter-day Saints.

Sorensen will welcome that discussion.

"Something that's more in harmony with what's currently in the community," he said. "I think you'd have the community rallying behind it, saying, 'Thank you. This is awesome.'"