'We were stranded multiple times'

Utah missionary shares how they made it home after the Philippines locked down
Posted: 6:26 PM, Mar 24, 2020
By: Erin Cox 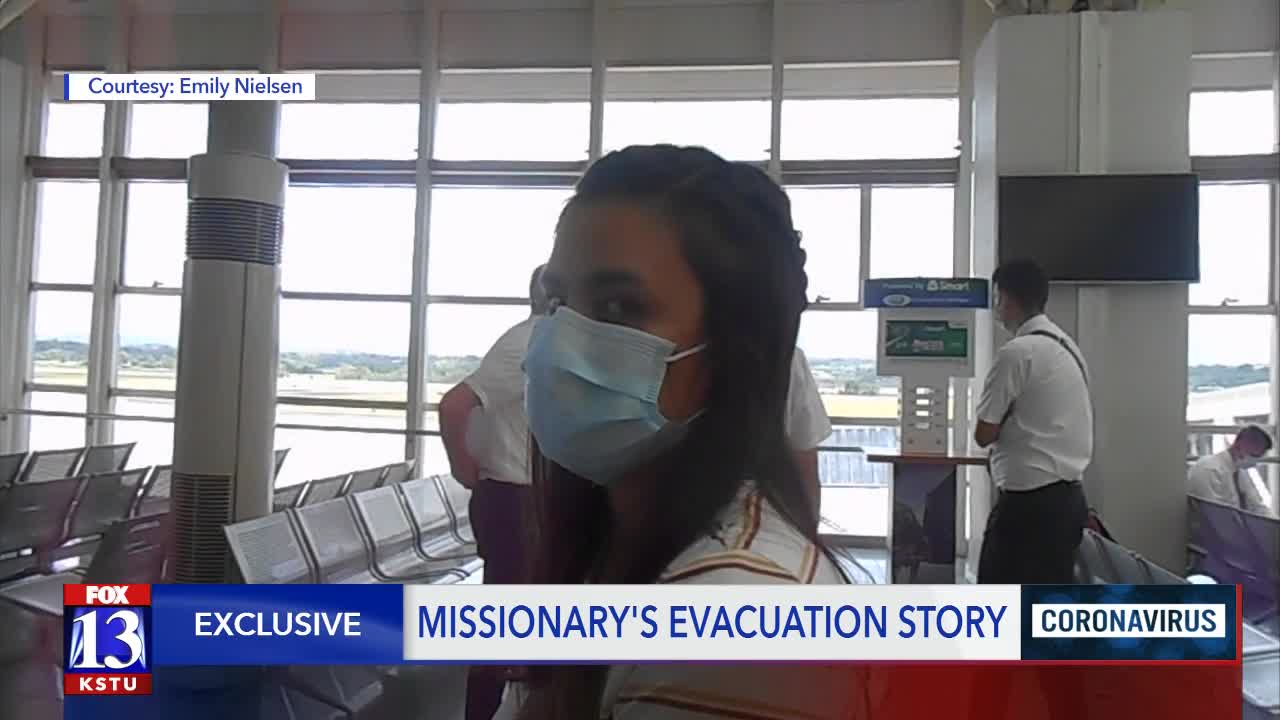 Missionaries for The Church of Jesus Christ of Latter-day Saints have started their quarantine after they returned on a special flight from the Philippines.

SALT LAKE CITY — Missionaries for The Church of Jesus Christ of Latter-day Saints have started their quarantine after they returned on a special flight from the Philippines.

The day following her five-month mark serving in the Philippines, Sister Emily Nielsen said she received a call telling her she was going home.

Things had been relatively normal in the Philippines until the government suddenly shut the country down.

Related story: Utah family says missionary in Philippines may not make it out before country goes on lockdown from COVID-19 outbreak

“This virus is just so crazy that nothing is the same from minute to minute,” said Sister Nielsen.

The same was true for the plans to get the missionaries out of the Philippines.

Originally, Sister Nielsen said they were going to take a boat from Panay to Cebu, which would take anywhere from 12 to 26 hours. Once in Cebu, the missionaries would then catch a flight to Manila.

That was before Cebu shut everything down.

“There was no way for us to get off of the island,” said Sister Nielsen. “We were stranded multiple times and we had no way to get home.”

Minute by minute, cities continued to shut down, including all of the airports.

“We had one point where our mission president stood up and said, ’missionaries we need you to pray, we need a miracle,’” said Sister Nielsen.

Even during this time of uncertainty, Sister Nielsen said there was no doubt in her mind they would somehow make it home to the U.S.

Suddenly, things changed again and Sister Nielsen said they found a way to travel to Iloilo City and then fly to Manila.

Sister Nelson was one of the first groups to make it to Manila, where at least 1,500 missionaries then met to take five special, charter flights sent by Delta, home.

“I was on the first flight and when we were touching down, we could see the other flight coming in behind us,” said Sister. Nelson.

The flights were kept close together, but Sister Nelson said it wasn’t too close.

“We had a running joke that social distancing was just making room for more angels,” said Sister Nielsen.

A miracle, Sister Nielsen said, she made it home.

’The human kindness and the human courage that we saw, it was really hard but it taught us a lot of really good things,” said Sister Nielsen.