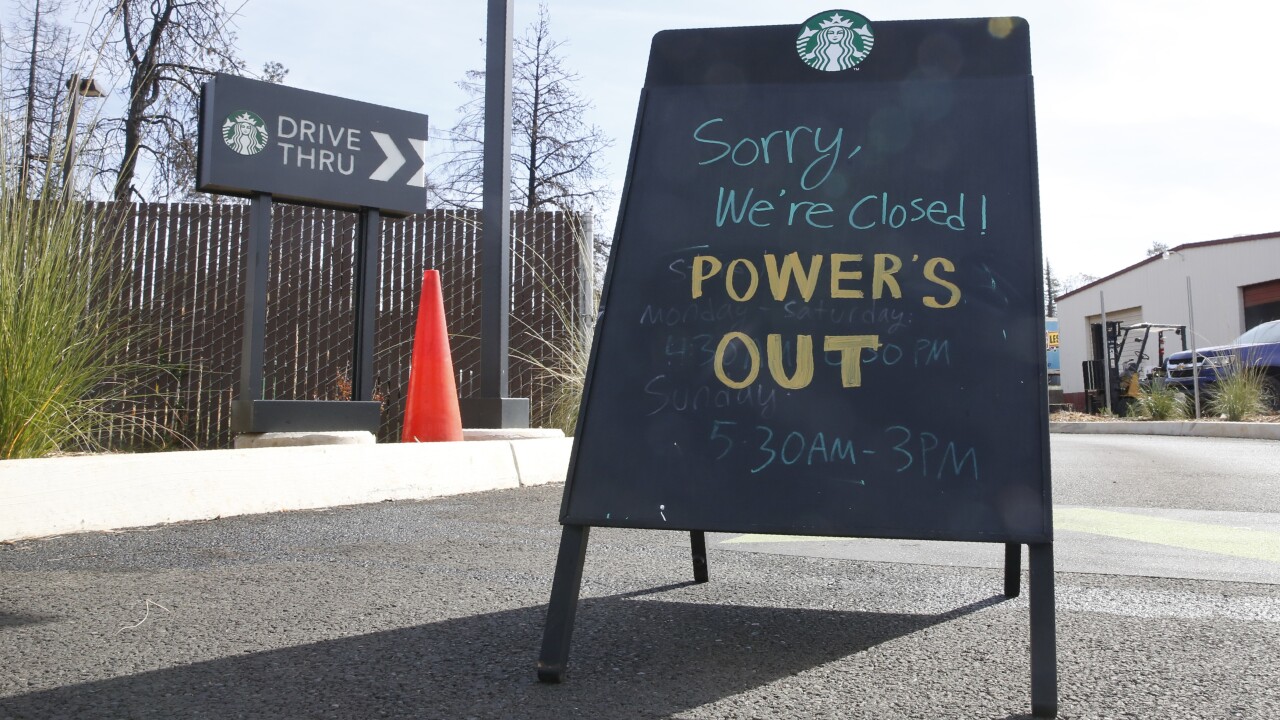 California's largest utility will intentionally shut off power to about 150,000 customers starting Wednesday to prevent its equipment from setting off blazes.

The shutoffs will begin as early as 6 a.m. local time and as late as 4 p.m., and will affect Northern California areas of the Sierra Foothills, the North Bay and the North Valley.

Pacific Gas and Electric Co. expects high winds and dry conditions over the next 24 hours, leading to increased fire risk. The public safety power shutoff will affect 18 counties, it said.

"PG&E will safely restore power in stages as quickly as possible, with the goal of restoring the most customers by end of day Thursday, based on the current weather conditions," the company said.

"Forecasts indicate the period of peak winds should end mid-morning on Thursday. Once the high winds subside, PG&E will inspect the de-energized lines to ensure they were not damaged during the wind event, and then restore power."

The utility's meteorologists are monitoring and anticipate sustained winds of up to 25 mph and gusts ranging from 30mph -50 mph. Fire weather watches have been issued in the service area because vegetation is extremely dry and temperatures are 5-15 degrees above average, the company said Sunday .

The utility is under constant criticism for cutting power to thousands of people several times in the past weeks. The practice known as Public Safety Preventative Shutoffs intentionally cuts electricity to avoid causing fires during high winds and dry conditions.

Last year's devastating Camp Fire that killed 85 people and destroyed thousands of structures was started by electrical lines owned by PG&E. The company filed for bankruptcy in January as it came under pressure from billions of dollars in claims tied to deadly wildfires.

To avoid being blamed for another wildfire, some utilities have decided to cut power during high winds when the fire risk is elevated. In addition to PG&E, utility company Southern California Edison has also turned off power in the past in affected areas.

California Gov. Gavin Newsom has said the state could take over the utility if it does not pull itself out of bankruptcy by the middle of next year.

"PG&E as we know it may or may not be able to figure this out. If they cannot, we are not going to sit around and be passive," Newsom said. "If Pacific Gas and Electric is unable to secure its own fate and future ... then the state will prepare itself as backup for a scenario where we do that job for them."