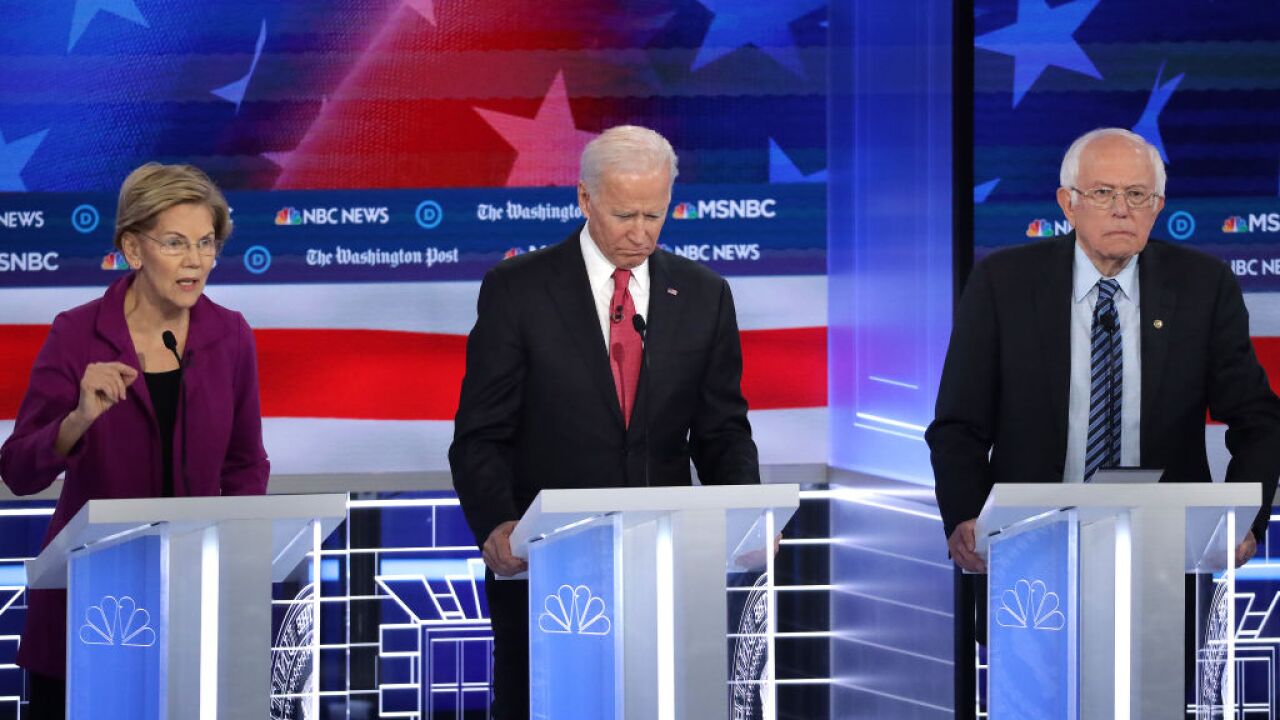 Ten candidates are on the stage this time, down from 12 at the debate in October. Julián Castro, a former secretary of Housing and Urban Development, did not meet the party's qualification standards for this debate, and former Congressman Beto O'Rourke of Texas dropped out of the race.

This debate arrives at a time of volatility in early-state polling. South Bend, Indiana, Mayor Pete Buttigieg faced increased scrutiny after a Des Moines Register/CNN/Mediacom poll showed him leading in Iowa, the first voting state. Former Vice President Joe Biden's campaign has suggested that he plans to use the debate to attack Sen. Elizabeth Warren of Massachusetts over her position on health care. And Sen. Bernie Sanders of Vermont remains firmly in the top tier of national and state polls.

Sanders on US health care spending

Sen. Bernie Sanders said the US has a health care system "in which we spend twice as much as do the people of any other country."

Facts First: This is not true. The US spent twice as much per capita on health care last year than the average for Organisation for Economic Co-Operation and Development (OECD) countries, but not twice as much as every single one of the organization's 35 other members.

Sanders has been repeating this exaggeration since at least 2009, when fact-checkers at PolitiFact first noted that it wasn't true. CNN fact-checked him during the Democratic debate in September .

Facts First: Harris' characterization is misleading. Gabbard did appear on Fox News during the Obama administration, and often criticized the administration's Middle East policy. But she has appeared much more frequently on Fox News since Donald Trump took office.

Gabbard appeared on Fox News at least 15 times between January 2013, when she first took office, and January 2017 when President Obama left office. She often criticized the Obama administration but primarily in the context of Middle East policy.

By comparison, Gabbard has appeared on Fox News far more frequently during the Trump administration, and since she announced her presidential campaign -- appearing at least 15 times in 2019 alone.

In response to a question about child care costs, Andrew Yang said, "There are only two countries in the world that don't have paid family leave for new moms: the United States of America and Papua New Guinea."

Facts First: It's true that America ranks behind all other major developed nations when it comes to statutory paid family leave. But Yang's claim that only the United States and Papua New Guinea offer no paid family leave appears to be based on a report that is more than five years old.

The United States is the only member of the Organisation for Economic Co-Operation and Development that doesn't offer statutory paid family leave, according to a report from August 2019.

A May 2014 report by the International Labor Organization showed that out of 185 countries and territories that share information on parental leave, only Papua New Guinea and the United States "have no general legal provision for cash benefits."

The Yang campaign did not immediately respond to a request for comment on its sources.