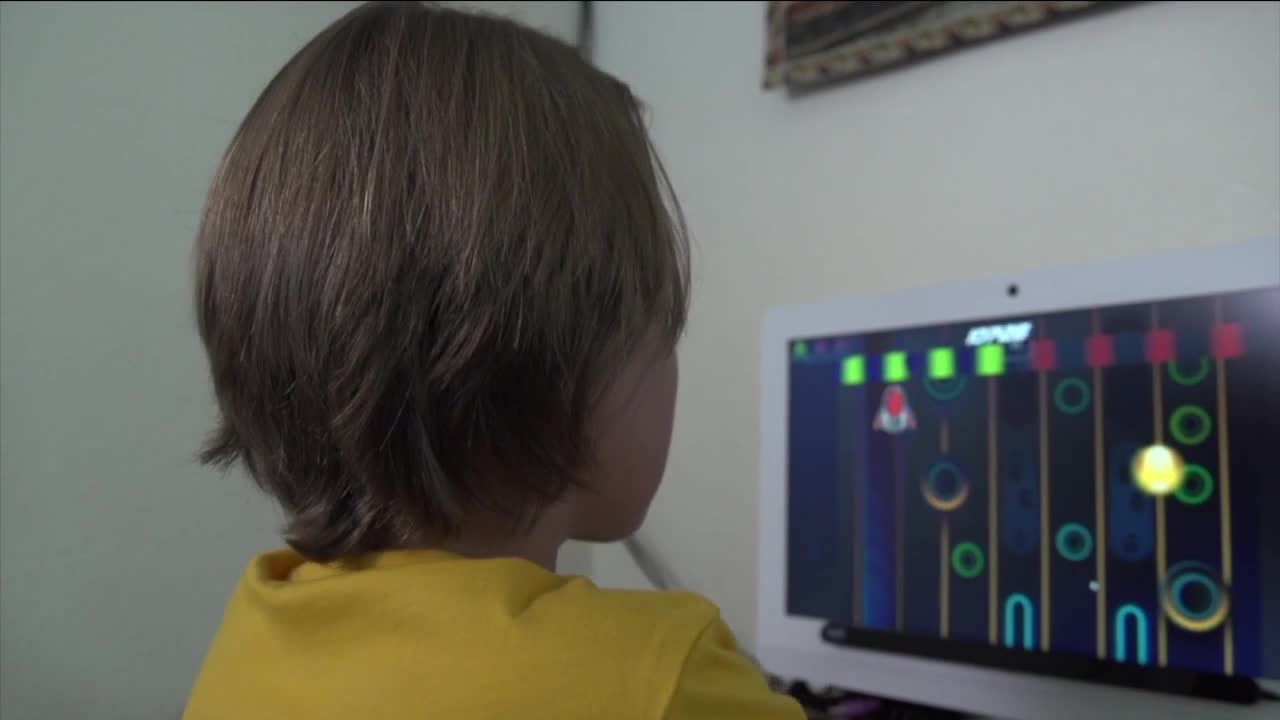 Video games are usually just about having fun, but one tech company says their games are trying to help kids improve their attention skills at the same time

Since the Food and Drug Administration (FDA) approved a prescription video game other tech companies have been working on more ways to help kids with their focus using similar methods.

One of those companies is BrainLeap Technologies.

They developed a small collection of computer-based video games called the Attention Arcade.

They work with an eye-tracker in different ways to help kids train their focus and attention skills.

The goal of Dr. Mole & Mr. Hide is to hit bandit moles as they pop out of the ground and to avoid looking at the professor moles.

As the game progresses, the moles appear more quickly and from more locations.

The game creators say this trains the ability to quickly and accurately orient the player’s gaze and attention to a sudden event and to monitor a wide range of view.

As the game gets harder, inhibitory control (the skill needed to avoid distractions) is also developed as the player avoids looking at the professor moles.

In this game, the player searches for spotted-top mushrooms in a mystical landscape, and by focusing their gaze on a “shroom” it causes it to shrink until it disappears.

The goal is for kids to get rid of all the shrooms before time runs out.

The game creators say this trains attention by requiring steady fixation of gaze, visual search in a crowded field, and the ability to ignore moving distractions.

For this one, the player uses gaze to steer a ship through a cosmic racecourse, aiming for green gates, avoiding red gates, and collecting stars for bonus points.

The BrainLeap teams say this game trains anticipatory focus by requiring the player to gaze ahead of the current ship position.

They also say executive functions related to planning are trained by the need to quickly decide whether collecting a star will leave enough time to avoid a red gate that causes damage to the ship.

This game trains a ninja for the dojo’s aerial skills exam.

Using their eyes, the player guides the ninja to land and balance on a series of rock pillars while avoiding birds and ignoring falling cherry blossoms.

The creators of the game say this trains planning, steady fixation of attention and gaze, and the ability to ignore moving distractions.

This game is unlocked after 3 hours of play.

For this one, Butterfly Bob collects nectar from flowers while avoiding menacing bugs and traps hiding in bushes.

The player uses their eyes to guide Bob vertically, flying higher or lower as needed.

This game is unlocked after 6 hours of play.

For this game, the player uses their gaze to steer a spaceship to avoid colliding with neighboring ships.

The game makers say this trains inhibitory control of attention, requiring the player to look for the empty space where the spaceship will be safe.

This game is unlocked after 10 hours of play.

Jeff Coleman, CEO of BrainLeap Technologies said, "My Co-Founders are scientists and they’re the ones who created these games initially for research."

That research was done at the University of California in San Diego.

"That shows that the skills that kids are learning in the video games actually transfer outside of those video games," said Coleman.

Parents call also track their child's progress by logging into the web portal and seeing how much they're playing, which games they're playing, and where the biggest improvements in their attention skills are.

This isn't a one and done situation either.

The creators of the Attention Arcade say in order to get the biggest benefit, kids need to do it regularly like you would with any other skill you're trying to improve.

The collection of games are now available on their website and cost $39 a month or $49 a month with a rented eye-tracker.

You can also buy your own eye-tracker on Amazon.