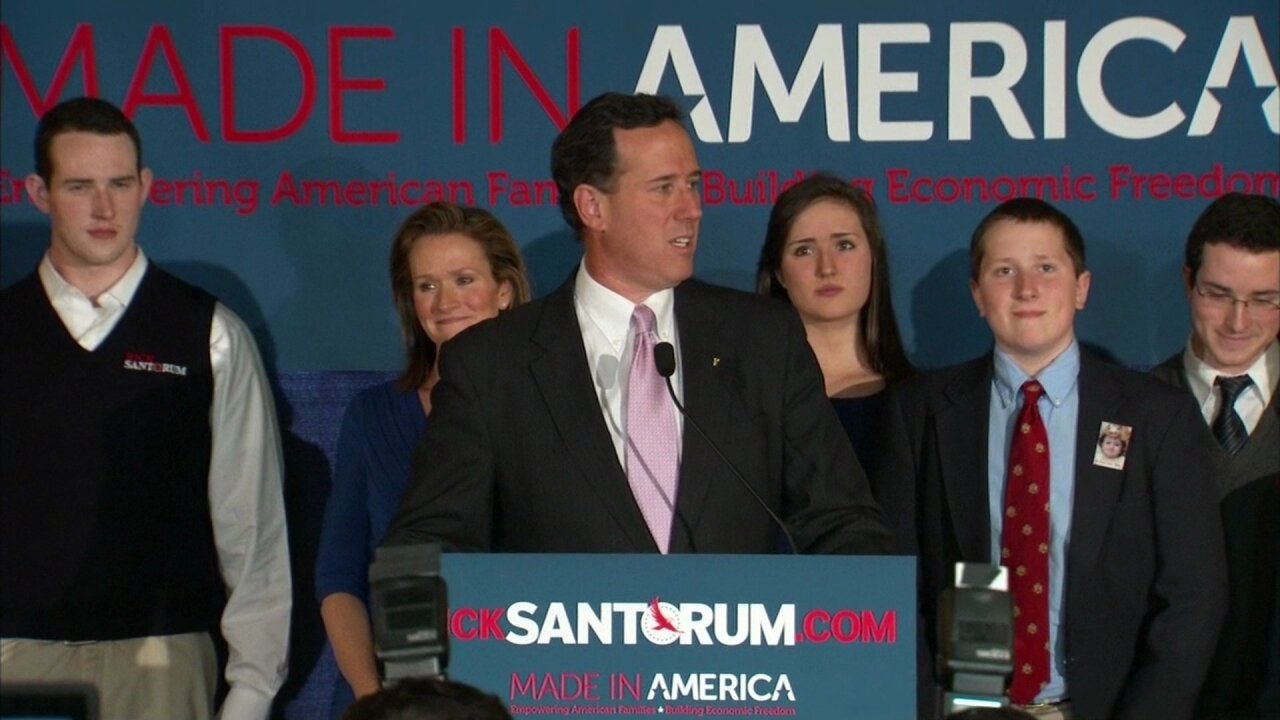 (CNN) — Rick Santorum took his re-energized Republican presidential campaign to Puerto Rico on Wednesday after primary victories in the South raised questions about conservative rival Newt Gingrich’s viability as a candidate and portended a long battle with front-runner Mitt Romney.

Romney, rejected again by Southern conservatives in the Tuesday primaries in Mississippi and Alabama, won caucuses in Hawaii and American Samoa to claim about a third of the total delegates available and maintain his lead.

However, Santorum’s twin primary triumphs — while narrow — reframed the GOP race as a one-on-one battle between the socially conservative former senator from Pennsylvania and the more moderate Romney, with Gingrich’s chances fading fast.

Rep. Ron Paul of Texas, the libertarian champion, continued to trail well behind the other three candidates in the campaign to face President Barack Obama in November.

“There is no end in sight,” said Ari Fleischer, a CNN contributor who was White House press secretary under President George W. Bush. “… For Republicans who thought that maybe Mitt Romney could come South and make this race look like it was coming to an end, this race is going on and on and on.”

Santorum headed to Puerto Rico ahead of its Sunday’s primary.

“We did it again,” Santorum told supporters Tuesday night in Lafayette, Louisiana. Louisiana will be the scene of another Southern primary on March 24.

The Alabama and Mississippi victories give Santorum 10 states so far to Romney’s 18, and he poked at the front-runner as he reiterated his stance he is the viable conservative alternative to the former Massachusetts governor.

“Sen. Santorum is at the desperate end of his campaign and trying in some way to boost his prospects,” Romney said earlier Tuesday on CNN’s “The Situation Room.”

Gingrich, who based his campaign on a Southern strategy after winning South Carolina and Georgia, appeared to be in major trouble after losing both Dixie primaries Tuesday.

Last week, Gingrich spokesman R.C. Hammond said the former House speaker had to win Alabama and Mississippi to remain credible. Gingrich later said he would continue to the national convention in Tampa no matter what happens, and he repeated that assertion Tuesday night.

“The fact is that in both states, the conservative candidates got nearly 70% of the vote, and if you’re the front-runner and you keep coming in third, you’re not much of a front-runner,” Gingrich said of Romney’s performance in Mississippi and Alabama.

Citing what he called Romney’s vulnerabilities over the health care reform issue, Gingrich added that “I do not believe that a Massachusetts moderate who created ‘RomneyCare’ as the forerunner of ‘ObamneyCare’ is going to be in a position to win any debates this fall, and that is part of the reason I’ve insisted in staying in this race.”

Calls for Gingrich to drop out and unite conservative support for Santorum have already started, but Gingrich argues none of the candidates is likely to reach the 1,144 delegates necessary to clinch the nomination before May or June at the earliest, and probably not until the August convention.

Before Tuesday, Romney needed roughly 48% of the remaining delegates to win, while Santorum needed about 66% and Gingrich 72%. Santorum, Romney and Gingrich each won roughly a third of the combined delegates at stake in Mississippi and Alabama.

Romney’s victories in Hawaii and American Samoa demonstrated his stronger organization. Last Saturday, Romney won caucuses in Guam and the Northern Mariana Islands, and he also picked up a majority of the delegates in the U.S. Virgin Islands.

Santorum was coming off a big win Saturday in Kansas, and his victories Tuesday indicated a comeback after trailing Gingrich and Romney in polls released earlier this week.

Romney’s campaign has pointed to its delegate lead as a reason for Gingrich and Santorum to get out of the race.

Eric Fehrnstrom, a Romney campaign senior adviser, said the campaign met its goal of taking roughly one-third of the Mississippi and Alabama delegates.

“Once the dust clears, you’ll be able to look and see that there really will be no ground that our opponents have made up against Mitt Romney,” Fehrnstrom said Tuesday night. “And as you look at the upcoming contests on the calendar, there are no opportunities for them to have significant wins that allow them to accumulate large numbers of delegates so that they can close that gap with Mitt Romney.”

As results were coming in Tuesday night, CNN chief political analyst Gloria Borger said that hard-core conservatives’ preference for Santorum or Gingrich means Romney benefits from the presence of both.

“Gov. Romney needs Rick Santorum and Newt Gingrich right now. … If it weren’t for them splitting the conservatives — the very conservative, the evangelical, the tea party voters — Mitt Romney would not be within sort of a position to win in either of Mississippi or Alabama. So the fact that they’re splitting the vote … he ought to pay them both to stay in for a little bit longer.”

Santorum and Romney are expected to split the next few contests on the calendar. Santorum won the nonbinding primary in Missouri in February and is expected to take the state’s caucuses on Saturday. Romney is expected to win Puerto Rico’s primary.

Polls in Illinois, which votes Tuesday, show a tight race, and Santorum is expected to win in the upcoming Louisiana primary.

Then the race turns north and eastward — the District of Columbia, Maryland and Wisconsin vote on April 3 and Romney is the early favorite there. But that’s three weeks away, and much has changed in such a span in the most volatile Republican race in generations.

Paul didn’t campaign over the past week in either Alabama or Mississippi. Both states held open primaries, which meant Republicans, independent voters and Democrats could cast ballots in the GOP contests.