France plane crash: 150 believed on board, no survivors expected

– 12:54 p.m. ET: The doomed Germanwings plane is obliterated, with no piece of debris larger than a “small car,” said Gilbert Sauvan, the president of Alpes de Haute Provence region.

Sauvan, a high-level official who is being briefed on the operation, said that human remains are strewn for several hundred meters. Helicopters have flown over the crash site but have not been able to land.

Authorities may not be able to retrieve any bodies Tuesday, according to Sauvan, with the frozen ground complicating the effort. Wednesday may not be much easier, with snow in the forecast.

– 12:20 p.m. ET: There were 144 passengers (including two babies) and six crew members aboard Germanwings Flight 9525, an airline spokesperson said.

– 11:59 a.m.: Some 210 French people are working the scene around where Germanwings flight presumably crashed in the French Alps, according to a tweet from France’s Gendarmerie, or national police. Another 350 are on the way.

– 11:59 a.m.: Sylvia Loehrmann, a German education minister in a region that includes Haltern, said on German television she believes students and teachers were on board the doomed Germanwings flight.

“We can say with relative certainty that we have these victims,” Loehrmann said.

Florian Adamik, a municipal official in Haltern, earlier told CNN that 16 students and two teachers from one German high school — called Joseph Koenig Gymnasium — were booked on the flight.

A crisis center has been established at the city hall in Haltern, which is about 48 miles (77 kilometers) north of Duesseldorf’s airport.

– 11:47 a.m. German President Joachim Gauck is cutting short his trip in South America and will return to Berlin because of the Germanwings crash.

Now in Lima, Peru, Gauck expressed condolences to loved ones of the victims, saying, “I hope they find consolation in this difficult time.”

– 11:40 a.m. A chapel will be set up near the presumed crash site of Germanwings Flight 9525 for relatives of those who were on board, French Interior Minister Bernard Cazeneuve said.

– 11:12 a.m.: Francis Hermitte, the mayor of France’s Seyne les Alpes, told CNN that he has not heard anything about a “moving body,” as a Spanish newspaper reported.

– 11:12 a.m. Michel Suhubiette, a mountain guide in France, said he heard a plane fly at alarmingly low altitude shortly before the crash.

By Tuesday afternoon, at least a dozen police, military and fire department helicopters were flying in and out of where the Germanwings plane is thought to have gone down, according to Suhubiette.

Helicopters would be the only way to get to the purported crash site, though getting there may be tough. Suhubiette said clouds were coming into the area, and bad weather is forecast for Wednesday.

– 10:30 a.m.: Air traffic controllers sent out a distress signal after controllers became concerned at the loss of radio contact with the doomed Germanwings plane and the speed of the plane’s descent, a spokesperson for the French civil aviation authority said. The crew of the plane did not issue a distress call before crashing in southern France, the spokesperson said.

– 10:20 a.m.: Those on Tuesday’s fallen Germanwings plane include 67 German citizens, but “this figure may change” when the passenger list is checked with relatives, according to airline CEO Thomas Winkelmann.

– 10:11 a.m.: The aircraft last had contact with French radar services at 10:53 a.m., according to the Germanwings executive. Germanwings Flight 9525 had left Barcelona airport at 10:01 a.m., the airport website said.

The captain of the downed plane had flown for Germanwings for more than 10 years, and had more than 6,000 flight hours on this model of Airbus. 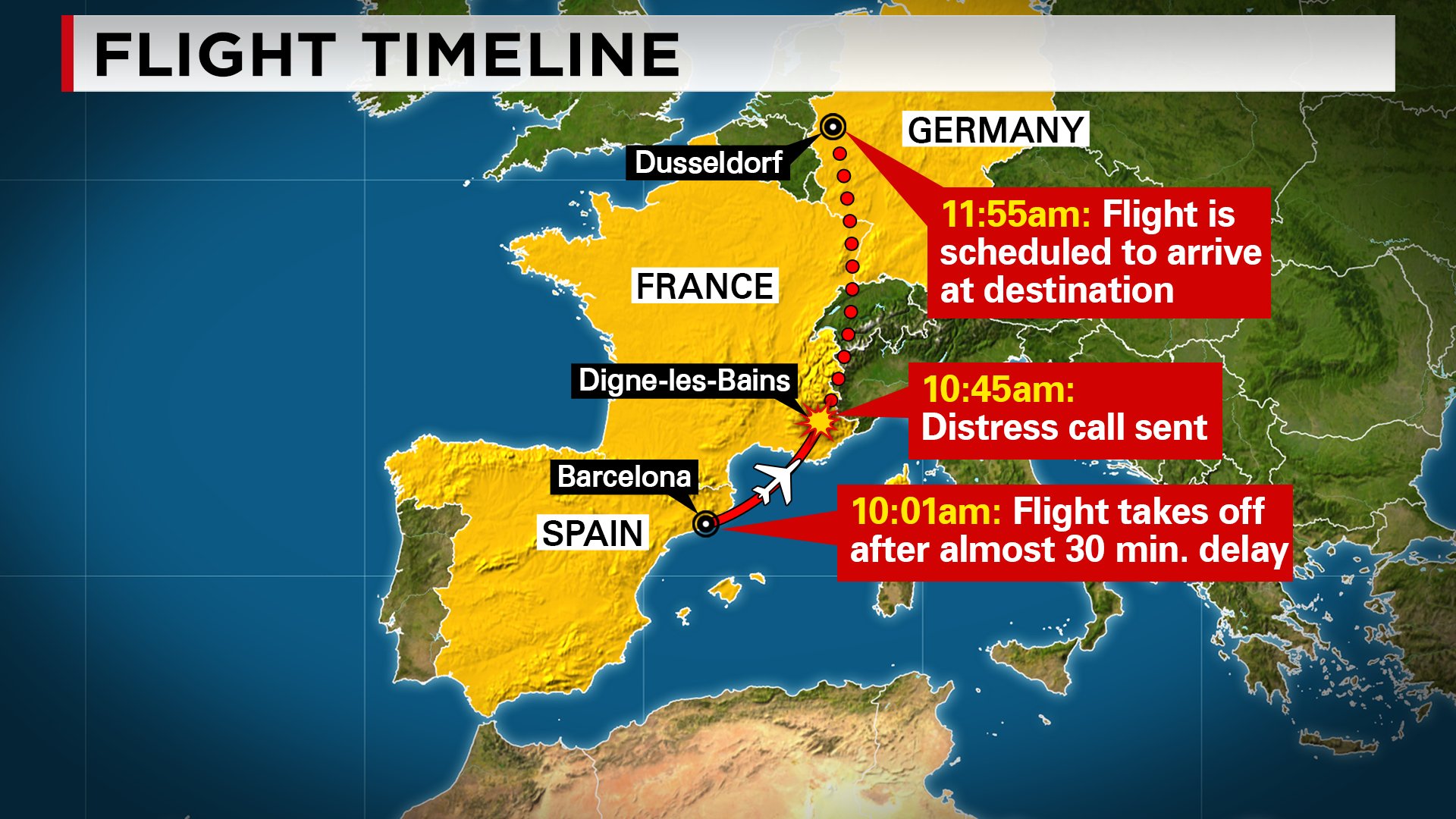 A Germanwings Airbus A320 plane crashed Tuesday in the foothills of the Alps in southeastern France with at least 150 people on board, according to Germanwings managing director Oliver Wagner.

French Prime Minister Manuel Valls told reporters he fears all those aboard the flight from Barcelona, Spain, to Dusseldorf, Germany. The plane crashed near Digne-les-Bains, in the Alpes de Haute Provence region, Valls said.

“The conditions of the accident are not yet clear but lead us to believe there will be no survivors,” Hollande said.

Spain’s King Felipe VI, who cut short a state visit to France as news of the crash broke, said there was a “high number of Spaniards, Germans and Turks” on the doomed Germanwings flight.

Spanish Prime Minister Mariano Rajoy tweeted that he will return to Madrid, put together a “crisis team” and send a minister to France.

Relatives of those believed to be on the flight, fearing the worst, have started to gather at Barcelona airport, where a crisis center has been set up.

German Chancellor Angela Merkel said Tuesday that “we don’t know much about the flight and the crash yet. And we don’t know the cause.”

Merkel said that she’s been in touch with France’s President and Spain’s Prime Minister, with all agreeing to “help each other in any form.”

There were “many” Germans on the plane, she told a news conference, adding that the suffering of the families concerned was “incredible.” “We have to think of the victims and their families and their friends,” she said.

Merkel said she was sending two ministers to France on Tuesday and would travel to the crash site on Wednesday to see it for herself.

German Foreign Minister Frank-Walter Steinmeier said the German government had set up a crisis center in response to the “terrible news” and was in close contact with the French authorities.

“In these difficult hours, our thoughts are with those who have to fear that their close ones are among the passengers and crew,” he said.

Hollande warned that it could take some hours for the emergency services to reach the remote crash site.

Because of the terrain, it will be a difficult site for rescuers to access, Zeisser said. A police helicopter is in the area, he said.

The sports hall of a local school has been freed up to take in bodies of the victims of the plane crash, Sandrine Julien from the town hall of Seyne-les-Alpes village told CNN.

The school remains open, she said. Seyne-les-Alpes is about 10 kilometers (6 miles) from the crash site.

Mountain guide Yvan Theaudin told BFMTV the crash was in the area of the Massif des Trois Eveches, where there are peaks of nearly 3,000 meters (1.9 miles). It’s very snowy in the area and the weather is worsening, he said, which could complicate search and rescue efforts.

Responders may have to use skis to reach the crash site on the ground, he said.

The crash site is closer to Barcelona than Dusseldorf, but well into the flight. Crashes midflight are rare, as most happen near takeoff or landing, CNN aviation analyst Mary Schiavo said.

According to the U.S. Federal Aviation Administration, just under 16% of aviation accidents occur during the cruise portion — meaning after the climb and before descent — of a flight. Accidents are more common during takeoff and landing.

The twin-engine Airbus A320s, which entered service in 1988, is generally considered among the most reliable aircraft, aviation analyst David Soucie said.

It is too early to know what happened, but Schiavo said there were some clues that rescuers and investigators will look at.

First is the speed of the jet’s descent.

This could indicate that there was not a stall, but that the pilot was still controlling the plane to some extent, Schiavo said.

Had there been an engine stall, the plane would have crashed in a matter of minutes, she said.

That small piece of information about the descent means that the pilot could have been trying to make an emergency landing, or that the plane was gliding with the pilot’s guidance, Schiavo said.

A scenario where the plane was gliding is potentially more dangerous because wide fields for landing would be hard to come by in the mountains, she said.

The mayor of the French community of Barcelonnette, near the crash site, told CNN affiliate BFMTV that emergency responders had been sent to the crash area. A helicopter has also been deployed to try to locate the precise crash site, he said.

The valley is long and snow-covered, and access is difficult, Barcelonnette Mayor Pierre Martin-Charpenel said. It was well populated in the 19th century but there are almost no people living there now, he said.

It’s an out-of-the-way place with magnificent scenery, he said.

Germanwings is a low-cost airline owned by the Lufthansa Group. Lufthansa has gradually been transferring many of its short-haul flights to Germanwings, with the exception of flights operated from its Frankfurt and Munich hubs.

Founded in 2002, Germanwings became a wholly owned Lufthansa subsidiary in 2009.