SALT LAKE CITY -- The Church of Jesus Christ of Latter-day Saints announced Friday that Boyd K. Packer, President of the LDS Church's Quorum of the Twelve Apostles, has died at the age of 90.

Packer had served as President of the Quorum of the Twelve since 2008. Prior to serving in that capacity, Packer was the acting president of that body since 1994. He served more than 50 years as one of the LDS Church's General Authorities.

Elder Boyd K. Packer was sustained as a member of the Quorum of the Twelve Apostles on April 6, 1970. (photo courtesy Intellectual Reserve and the LDS Church)

"The lessons that he's taught are long in the hearts of people and in their minds," said Elder Allan Packer, President Packer’s son and a member of the LDS Church's Quorum of the Seventy, in a statement issued by the Mormon Church.

President Boyd K. Packer of the Quorum of the Twelve Apostles speaks at the Sunday afternoon session of general conference, April 6, 2014. (Photo courtesy Intellectual Reserve and the LDS Church)

Packer was born September 10, 1924 in Brigham City, Utah, according to the church. He was a United States bomber pilot during World War II and served in the Pacific Theater. He was professional educator whose service to the LDS Church included time as the supervisor of seminaries and institutes of religion. He was also a member of the administrative council at Brigham Young University, the church said.

"President Packer was also known as a fearless defender of the gospel of Jesus Christ and spoke boldly about the teachings and doctrine of the Church," the church said in its statement.

President Boyd K. Packer, his wife Donna and their son Elder Allan F. Packer of the Seventy and his wife Terri participated in the cornerstone and dedication of the Brigham City Utah Temple. (Photo courtesy Intellectual Reserve and the LDS Church)

It was his stances on some hot-topic issues that often made him the subject of scorn and controversy. Remarks he made on homosexuality and gays being able to change their orientation at an LDS General Conference in 2010 sparked large protests around Temple Square. In remarks in 1993, Packer spoke about "the dangers" of the feminist movement as well as scholars and intellectuals.

Many Utah leaders who worked with Packer described him as "unwavering" in his faith and "deeply committed" to his beliefs.

It was Packer's talks on a wide-variety of spiritual themes that resonated with Mormon faithful whom FOX 13 spoke with outside Temple Square on Friday.

"He was an inspiration. He always gave great talks," said Julia Wardle.

"His inspiration was really powerful and it'll be sad to see him go and not be able to hear him anymore," said Abby Farner.

Elder Packer is survived by his wife, Donna, and 10 children. The LDS Church said funeral arrangements were being made. No decisions have been made about any successor in the Quorum of the Twelve.

In statements, Utah leaders reflected on the passing of Elder Packer:

“Throughout his life, including his 45 years of service as a member of the Quorum of the Twelve Apostles, Pres. Boyd K. Packer was unwavering in his devotion to his faith and the principles by which he lived his life. A native son of Brigham City, his strength and love were felt by church members throughout the world. On behalf of the people of Utah, Jeanette and I extend our sincere condolences to the Packer family and to all with whom he served.”

"I was saddened to hear about the passing of Elder Boyd K. Packer, president of the Quorum of Twelve Apostles for the Church of Jesus Christ of Latter-day Saints.  He has spent a lifetime serving others and testifying of our Savior Jesus Christ.  His stalwart adherence to the principles of the Gospel has been an example for all to follow, and he was bold in the declaration of his beliefs.  He never hesitated to share his testimony of gospel principles and was a bedrock of strength for his family and for all members of the Church. He was an artist, an educator, and a servant of our Heavenly Father.  Elaine and I send our thoughts and prayers to his wife Donna and his family and many friends."

Lane Beattie, President of the Salt Lake Chamber of Commerce:

“President Packer was a uniquely talented individual. He strengthened the spirituality of many within our community and inspired countless others to provide service to our state, our country and around the world.

The Salt Lake Chamber and Utah’s business community extend our heartfelt condolences and support to the Packer family at this time. We’ve lost a strong leader. He will be deeply missed.”

The Catholic Diocese of Utah:

"The clergy and faithful of the Catholic Diocese of Salt Lake City offer our deepest condolences to the First Presidency and to the Quorum of the Twelve of the Church of Jesus Christ of Latter-day Saints as well as to the family of Apostle Boyd K. Packer. His decades of service to his church and the community and his commitment to his family mark a rich and enduring legacy. We always considered him a true friend."

"On behalf of the Utah Republican Party, I would like to extend our deepest sympathies to the family of President Boyd K. Packer.  President Packer was a champion of the family and his decades of service as a member of the Quorum of the Twelve Apostles will have an indelible impact here in Utah and throughout the world. On this Independence Day, I want to especially honor President Packer for his military service and his commitment to defending our country's freedoms and way of life."

"President Packer was a dedicated leader and a man committed to his faith. He was devoted to community and service. As a native and lifelong Utahn, President Packer traveled the world, sharing his understanding and perspective of his church with passion and zeal. Our thoughts are with President Packer's family and those he served." 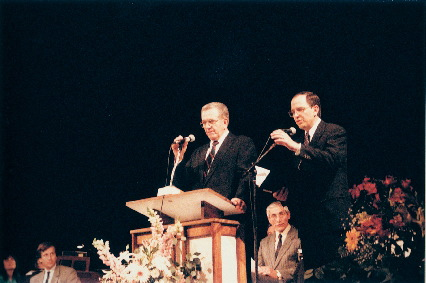 The LDS Church posted a YouTube video titled "Boyd K. Packer: The Artistry of an Apostle" along with the announcement of Packer's death. See the video below.

More details will be posted as they become available.