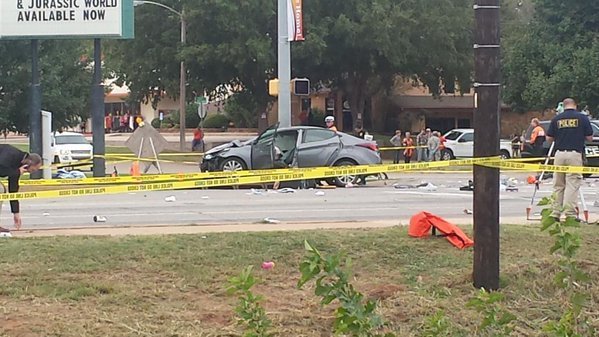 Acacia Chambers, who’s accused of driving under the influence and plowing her car into a crowd of spectators at an Oklahoma State University homecoming parade Saturday, is charged with four counts of second-degree murder, police said Sunday.

A car that careened into crowds at an Oklahoma State University homecoming parade killed a toddler, a graduate student and a couple who’d worked at the school for decades, officials said.

The Saturday crash also injured dozens of people, including 11 victims younger than 13. The car’s driver has been arrested on suspicion of driving under the influence.

A day later, family members of the injured waited for word as their loved ones underwent surgeries and medical tests.

“It’s been a crazy 24 hours,” Mark McNitt said, tearing up as he told reporters about the crash and its aftermath. One minute, McNitt was standing beside his stepfather, 54-year-old Leo Schmitz, near the end of the parade route. The next minute, he said, things were so chaotic it seemed like a bomb had gone off.

Now his stepfather is one of four patients who remain in critical condition, while family members keep vigil. McNitt described his injuries as severe, but he praised doctors for their care and people from across the state for coming together during the tragedy.

“We missed the game,” he said, “but we feel the love, and we’ll get through this.”

Oklahoma State University President Burns Hargis called the crash an “incomprehensible tragedy.” In a statement, the school said three of the victims were “members of the OSU family.”

Marvin Stone, 65, was a retired professor and researcher in the Department of Biosystems and Agricultural Engineering. His 65-year-old wife, Bonnie, had worked for the university for more than 30 years as “an unselfish and dedicated employee” in Institutional Research and Information Management, the school said.

Another employee at the school, Nicollete Strauch, survived the crash, but her 2-year-old son Nash was killed, the university said. Strauch, who is a sophomore majoring in chemical engineering and works in parking and transit, is recovering from injuries and devastated by her son’s death, officials said.

In a statement, the president of the University of Central Oklahoma said one of the people killed was Nikita Nakal, an MBA student from Mumbai, India. Police named a victim as 23-year-old Nakita Prabhakar.

“While our thoughts and prayers are with the Oklahoma State University community tonight following the tragic events during OSU’s homecoming parade this morning, it is with deep sadness that I ask you to extend those sentiments to the family and friends of one of our own students,” wrote President Don Betz. “Our students come to Central with their unique goals, hopes and dreams, and Nikita was undoubtedly no different.”

She had been attending Saturday’s parade with friends, Hargis said.

Of the 47 people treated after the crash, 17 remained hospitalized and four were in critical condition Sunday, officials said. Eleven of those treated for injuries were 13 and younger, including a 1-year-old, a 3-year-old and four 6-year-olds, Stillwater police said.

‘I flew over some strollers’

The festive homecoming scene quickly turned into one of horror.

“I can’t describe it any more clearly than this: people flying in the air,” OSU graduate student Paul Sims said of the moment of impact.

“I didn’t know what it was at first, so I just got up and ran,” Carter said. “The car hit me as it was stopping, and then I flew over some strollers.”

Another witness, Geoff Haxton, said he was about 100 yards from the crash site.

“All there was was smoke and panic. Half the emergency personnel in the county were here,” Haxton said. “People were running. (My) first instinct was to get my kids away from the street.”

Madison Atwell, 7, had six broken ribs, a concussion and stitches after the crash, her family said in a statement released through a hospital spokesman.

Her aunt, Julie Franklin, was not at the parade but said the young girl had a guardian angel, with a woman at the scene pushing her out of the way as the car drove into the crowd.

That guardian angel was one of the people who was killed in the crash, Franklin told KJRH.

Madison’s mother, Tasha, said on Facebook that her daughter had gone to the parade with her grandmother and aunt “to experience homecoming cowboy style.”

Instead of seeing her first OSU football game, Madison had her first helicopter ride, to the hospital, her mother said.

Stillwater police said Sunday that the car’s driver, Adacia Avery Chambers of Stillwater, had been charged with driving under the influence. She was transferred from a city jail to the Payne County Jail on Sunday.

Chambers would likely appear in court Monday and additional charges would be presented to the Payne County District Attorney’s office, police said in a statement.

Chambers allegedly drove her 2014 Hyundai Elantra into an unmanned police motorcycle before careening into the crowd of spectators.

The deadly crash occurred at 10:31 a.m., just hours before the school’s centerpiece homecoming event — a football game between the nationally ranked, undefeated OSU Cowboys and the University of Kansas — and only two blocks from the soon-to-be jampacked 50,000-person Boone Pickens Stadium.

Before the game, the OSU football team knelt in solemn prayer at the 25-yard line.

Fox Sports sportscaster Tim Brando described the pregame atmosphere as “the kind of somber feeling” that he’d never had before.