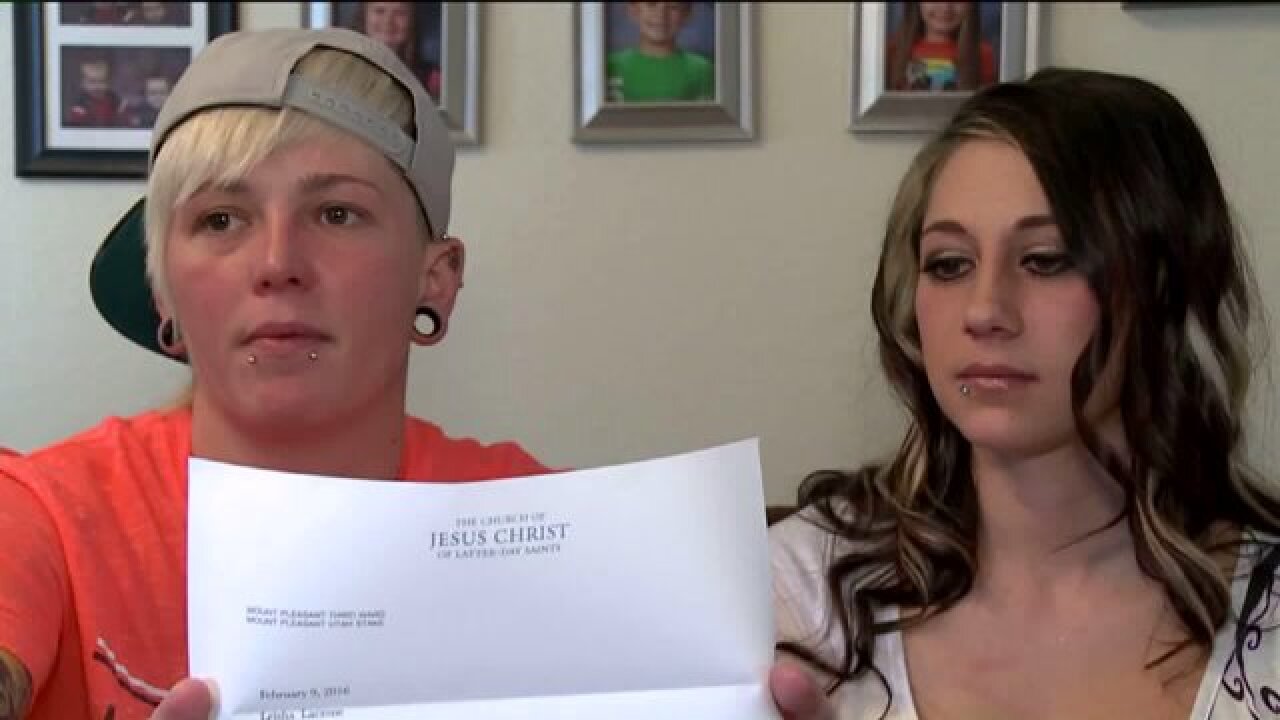 MOUNT PLEASANT, Utah -- A Mt. Pleasant same-sex couple claims leaders of a congregation of The Church of Jesus Christ of Latter-day Saints harassed them after a series of strange encounters they said were unwanted.

The final straw for them was a letter the ward delivered to them, which the women found disturbing. Now, they're trying to understand what sparked the LDS Church to send it.

Leisha and Amanda LaCrone are married and raising five children. They each attended an LDS Church as kids, but haven't been a part of the church in more than a decade.

"The Church had sent her a letter saying that she was already excommunicated," Amanda explained, about a letter Leisha got from the LDS Church 15 years ago.

That's why Leisha was surprised when a hardware store employee reportedly approached her two separate times.

"He continued to tell us that there were some things that the Mormon Church needed to talk to us about," she recounted. She said she told the man, "We don't want to be bothered, we have no interest."

Then, they said, came a number of phone calls asking to meet with the bishop.

The two said they declined, and that's when members of the Church reportedly came to their home, with letters.

"I was pretty angry when I opened it, not understanding why they want us to go to this church court when we don't attend church," Leisha said.

The letter addressed to her stated a disciplinary council was being held for her.

"Because you are reported to have participated in conduct unbecoming a member of the Church," said Leisha, reading off the letter.

The conduct, they guess, is that they're a same-sex couple and are married. But the women don't understand: Why the letters, why a formal council, and, why now?

The LDS Church said in an email that disciplinary actions are a private matter they don't comment on.

According to a Mormon resource site, a disciplinary council can be requested if a person is still on church records. The purpose is to discuss sins with the person, pray, and figure out how to move forward.

The results can range from no action, to excommunication.

The couple said they aren't against the Church or the Mormon religion, but they don't agree with the letter or how the ward handled the situation.

"I want them out, I don't want anything to do with them," Leisha said. "I would just like for them to let us live in this society and raise our children, and leave us alone."

After receiving the letter, Leisha posted a photo on Facebook and it took off with comments and shares.

Many shared comments of support for the two, and distaste for the LDS Church's actions.

So much so, they said many people began calling the ward.

"We certainly did not want people to be harassed," Amanda said. "That was not our intentions, and we feel really bad."

While they said some have criticized them for their stance on the letter, they've also gotten messages of support from around the world.

A representative from the local PFLAG chapter said he plans to talk with the bishop about why the letter was sent, and if other same-sex couples will be issued similar letters.

Leisha and Amanda did not attend the disciplinary council, and have not heard from the LDS ward since.