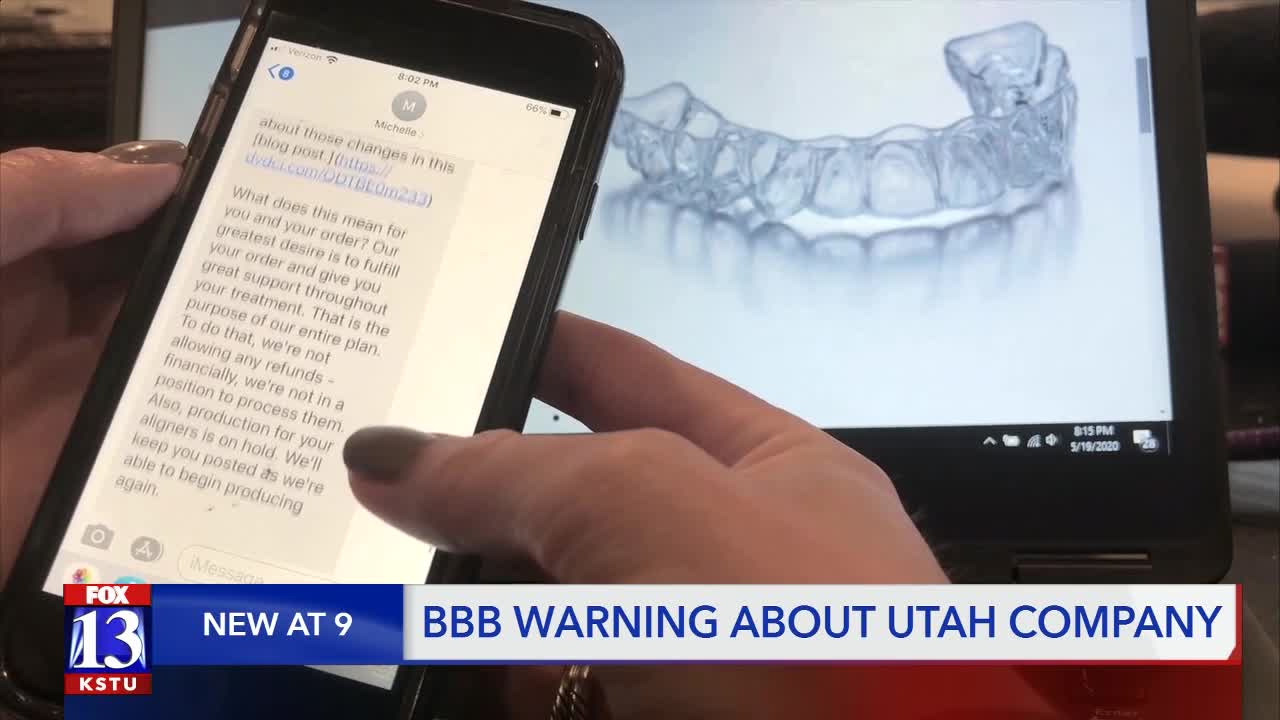 The Better Business Bureau is issuing a warning to consumers regarding a Utah-based teeth-straightening company that continues to recruit new customers after denying refunds and announcing a halt in production.

HOLLADAY, Utah – The Better Business Bureau is issuing a warning to consumers regarding a Utah-based teeth-straightening company that continues to recruit new customers after denying refunds and announcing a halt in production.

“Wish you would have kept wearing your retainer?” you can hear as a video blares from Smilelove’s homepage.

“Don’t hide your smile, love it!” the brightly colored video continues as a variety of people are seen smiling as they put invisible teeth-straightening aligners into their mouths.

“They had a big promotion going on, on Facebook,” said Michelle Ziegler from her Indiana home. “I was really excited, everybody wants perfect teeth.”

The clever marketing drew Michelle in, sold on the idea of a perfect smile in just six to eight months, for less than 2-thousand-dollars.

“I don’t just go on a company, I read the reviews and it was an amazing promotion, I was really excited about it,” Michelle said.

Michelle said she put down a 250-dollar deposit and agreed to pay 78-dollars a month. But, following an appointment with her dentist, she decided to delay the service until she could get other dental work done.

“They say, basically, to call them and they would send them out,” Michelle said. “They seemed legit, I believe them.”

Little did she know, not all consumer reviews reflect five-star service and pearly whites. In recent weeks, the company has received a laundry list of one-star reviews and negative comments on a variety of platforms, like Google reviews.

“More than scamming, this is scary,” Michelle said.

Rupp said Smilelove was once responsive, but stopped answering complaints sent to the BBB by consumers in the beginning of March.

“If you do business with this company, you may not get aligners, and unfortunately those who have already done business are probably not going to get anything either,” Rupp said.

On April 24, Smilelove posted a message on their Facebook page alerting their clients to financial troubles the company faced in January, prior to the pandemic. They continued, saying they were expecting funds from the pandemic derived Payroll Protection Program, which they hoped would bring a temporary solution.

The post has since been deleted – but the majority was captured in a screen grab, which can be read below.

“As COVID-19 continues to impact communities everywhere, we wanted to reach out and give you an update. In January, before this pandemic started to affect the economy, we were in a tough spot financially and were forced to lay off about 50% of our staff in an effort to continue operations. Shortly after, investors came on and we were working to build things back up when COVID-19 started to spread. When the stock market crashed in March, our investors had to pull out and not being able to make payroll, we were forced to shutter all business operations.

We apologize for not being in touch sooner, we were hoping to quickly figure out a solution, bring on new investment, and continue operations with minimal downtime. While we have not yet been able to secure additional funding, we did apply for and receive funds from the Payroll Protection Program so that our team can come back to work. This will allow our customer service and fulfillment teams to continue working, as well as our operational team members to figure out longer term solutions.”

On May 11, Smilelove customers received a message from the company – they said despite receiving financial support from the government’s Payroll Protection Program, they needed to make significant changes to ‘stay alive.’

According to Smilelove’s Thursday blog post, those changes included increased pricing for consumers, employee layoffs, and new marketing and customer service efforts to better address the lack of sales Smilelove is experiencing due to COVID-19.

The automated message continued, saying in order to fulfill orders again they would no longer allow refunds, and stopped production of all aligners. The message may be read in its entirety below.

The last few months have been a difficult and emotional time for us at Smilelove. We're reaching out now because we know you, too, have experienced frustration and lack of support. First, we're incredibly sorry. Second, we want to be completely transparent and update you on the state of the company and your order.

Despite receiving financial support from the government's Payroll Protection Plan, we've been in a challenging place and on the road to going out of business. To stay alive, we have entirely re-evaluated our business plan and have made several significant changes. You can read about those changes in this [blog post.](https://dydci.com/QDTBE0m233)

What does this mean for you and your order? Our greatest desire is to fulfill your order and give you great support throughout your treatment. That is the purpose of our entire plan. To do that, we're not allowing any refunds - financially, we're not in a position to process them. Also, production for your aligners is on hold. We'll keep you posted as we're able to begin producing again.

The best outcome for everyone is for the new business plan to be a success. We're pushing forward to get new orders. The more orders we get under this new plan, the faster and better we'll be able to service existing orders like yours.

Thank you so much for your patience and understanding through this time.

“We currently have almost 240-complaints that are pending, waiting for the company’s response, even though the company is not responding at this point,” Rupp said. “That means that more than 200-thousand-dollars is out there that consumers do not have the product or refund.”

“They’ve got every state they’re doing this too, it ain’t just Utah!” said Michelle.

Despite the company no longer rendering services, consumers can still buy aligners from their website – there are no warnings when purchasing that the company is no longer in production.

“They are taking more money and they are scamming so many,” Michelle said. “That’s horrible! Horrible! And all of these new clients are signing up for services and [the company] has no intentions on sending them out.”

“This is a problem, because what Smilelove is saying is that they can’t afford to service current customers who have paid. But, they are taking money from new customers, even if they may never be able to restart operations again,” Rupp said in a statement. “Putting any money into SmileLove right now is a huge risk for consumers. Their service isn’t cheap, and the business has given no guarantees that you can expect to receive their products, or your money back.”

“I can’t get in contact with them, nobody’s returning my calls and they just keep charging me every mother,” said Michelle. “I don’t know what else to do, I’ve contacted the Federal Trade Commission, I’ve contacted the Better Business Bureau, who else can I call? A lawsuit for small claims court? Class action?”

Michelle said she ordered a new debit card and alerted her bank to the issue to try to stop the payments. However, since she is on a payment plan through a third-party provider, her bank said there was little they could do.

“What hurts me, is my bank just keeps taking money out,” Michelle said. “This isn’t 50-dollars, this is thousands of dollars.”

“Be wary of this scandalous, scamming, fraudulent company, because they have no intentions on sending you aligners,” said Michelle.

FOX 13 reached out to Smilelove, but they have not returned our request for comment.

If you believe you have been scammed by Smilelove, BBB said the best thing consumers can do is contact whoever they are making payments through, whether that be a third party, a bank or their credit card company , to put a stop pay on the service.

Unfortunately, Rupp said there is typically a time limit and it is unlikely that people who have already paid will get their money back.