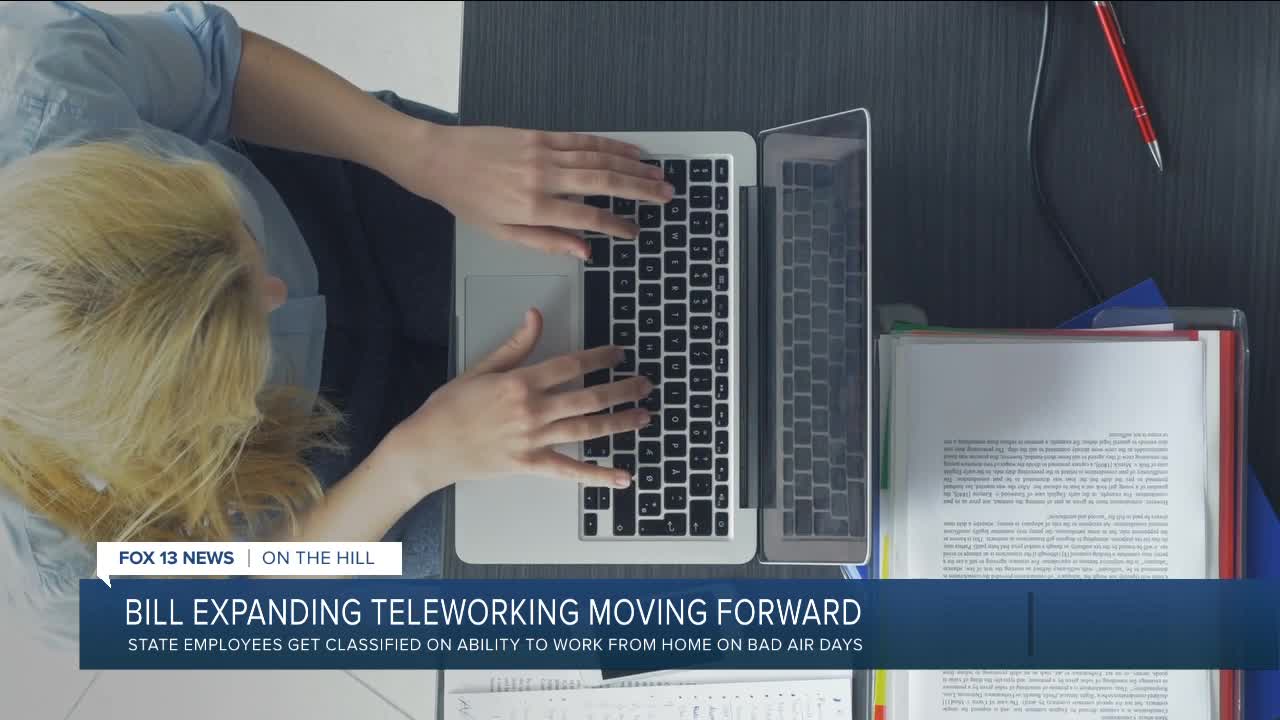 A bill that would dramatically expand teleworking in Utah is poised to advance on Capitol Hill.

SALT LAKE CITY — A bill that would dramatically expand teleworking in Utah is poised to advance on Capitol Hill.

The draft legislation, sponsored by Sen. Dan McCay, R-Riverton, would classify every state employee based on whether they can work from home. He hopes state government can be used an example for private industry.

"We’ve all now seen the effectiveness for teleworking and some places it works and some places it really doesn’t. But in those situations where it does work, we need to start looking at treating our air as important as, say, a global pandemic," he said in an interview Monday with FOX 13.

Sen. McCay said he designed the bill with air quality in mind. Every winter, the Wasatch Front is socked in with smog and inversion. His bill would allow state employees to pivot to working from home on days where air quality is at its worst (and leading up to those days). But it may not work for everyone. For example, a Utah Highway Patrol trooper can't "phone it in," the senator said, nor can a snow plow driver.

"There are certain departments where you look around the state, their work can be executed from home successfully. That percentage, some departments, it's as high as 70-80% and then in other departments, it’s as low as 20-30%," Sen. McCay said.

Built into the bill are regular check-ins with the legislature to ensure that teleworking is effective.

The bill will be presented Tuesday before the Utah State Legislature's Interim Economic Development and Workforce Services Committee. It has been in the works for months alongside other bills to incentivize teleworking and expand broadband access across Utah.

Teleworking has also been looked at as a rural Utah economic boost. In the eastern Utah city of Price, they have invested in a "co-working space." When COVID-19 hit, Price City pivoted a number of employees to working from home and is now looking to make it more permanently possible.

"We really tried to help our employees remote work when they can. We found efficiencies, a few inefficiencies as well," said Nick Tatton, Price City's community and human resources director. "We’re formalizing our remote work policies for our personnel and really trying to stay safe and health through the pandemic."

Tatton said Price has good broadband speeds, and believes teleworking could be something for a number of sectors of business and government.

"The opportunities with remote working are really probably the future in many professional services, walks of life," he said.

Sen. McCay said he is aware of a number of private industries re-evaluating the future of telework and their employees post-pandemic. There may be increased internet costs, but he believes that could be offset for employees based on gas and time savings from not being stuck in traffic.

"Tt’s not just the state. Every employer is doing an analysis based on how much office space do we need going forward and how much do employees want to be home after this?" he said.

If it passes the committee like it is expected to, the bill will be among those expected to be a top priority in the 2021 legislative session that begins in January.