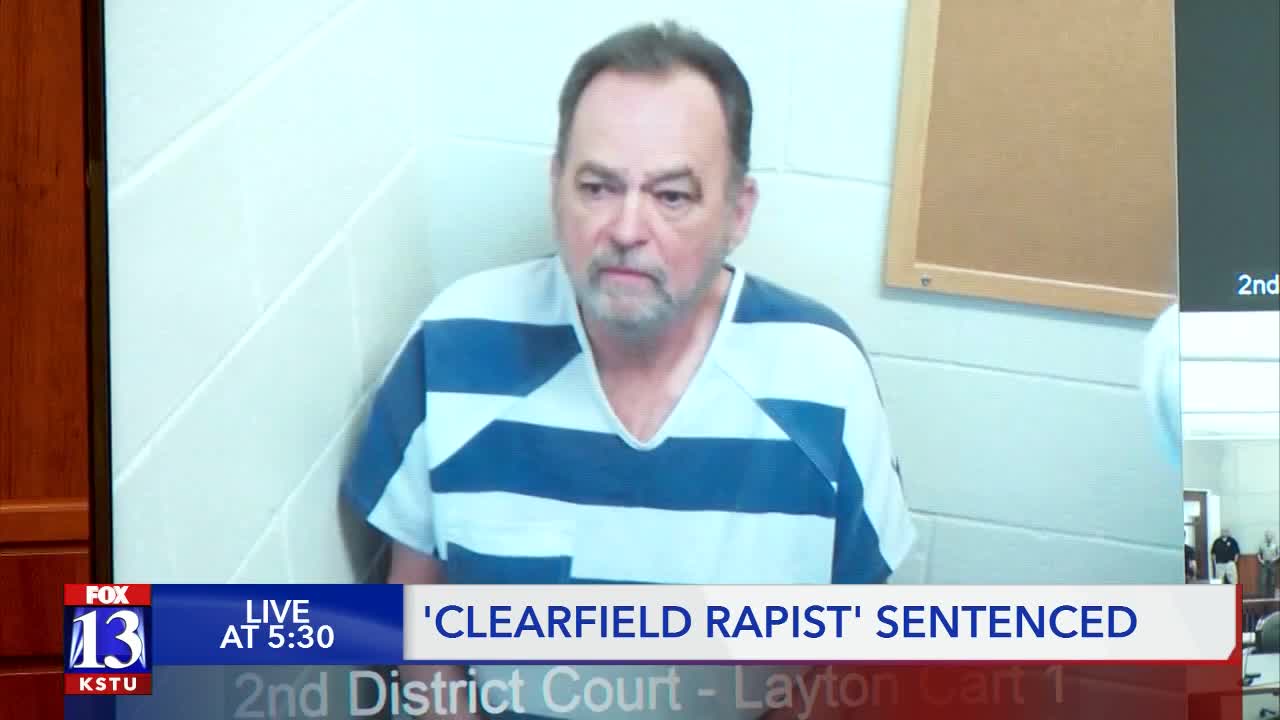 FARMINGTON, Utah — Mark Douglas Burns, known as "the Clearfield Rapist," learned on Monday he will likely spend the rest of his life in prison.

He was arrested at his home in Ogden on September 25, 2019 after investigators linked him to ten cases and eleven rape victims in Utah and Wyoming that occurred between 1991 and 2001.

The 17 charges tie back to just three of the eleven rape victims, although Burns has confessed to all of the cases.

Burns was given the opportunity to speak to the judge and his survivors, although his court appearance was through teleconference due to COVID-19 concerns.

"I have not committed a crime since 2002. My mind started functioning differently than it ever had. I started feeling emotions I had never felt before. I started feeling guilt, shame, remorse," Burns said. "It makes me sick to my stomach. I find it hard to believe that I was ever capable of doing that kind of crap to anybody. I just want my victims to know when I tell them I'm sorry, I mean it. I realize that saying I'm sorry doesn't fix what I did. Pleading guilty and going to prison doesn't fix what I did, but it's all I can do for them. I would ask that the court show me no mercy, because I deserve none."

Burns' face turned red as he delivered his statement. He became choked up and covered his hands with his face.

Throughout the rest of the hearing, he remained stoic while listening to victim-impact statements from some of his survivors.

Nichole Eyre was Burns' youngest known victim at the age of 11. She was not allowed to address Burns directly because the statute of limitations on her case had run out by the time Burns was arrested.

Eyre said she remembered Burns breaking into her Riverdale apartment through a sliding glass door. She said Burns then took her out of the apartment in his car and raped her in the back seat at knifepoint.

"One of my parents turned on the kitchen light. The guy put a knife against my neck and whispered not to scream and not to do anything," Eyre recalled. "I could hear a cupboard being opened, then the fridge. Some pouring of a liquid. I was trying to send a silent plea, 'Please check around the corner,' and at the same time, 'Don't check around the corner.' The blade was smooth against my neck. I didn't know what would happen if the person did check in on me. When the light went back off and we heard the door shut, the man spoke again wanting to know how many people were in the house."

"I was only 11 years old," she continued. "He made me deal with adult problems as a child. For three years I had to be tested for the HIV virus. In 1992 the AIDS virus was killing 90% of those who had it. There was one day in particular where my doctor left me a message, and I thought it had come back positive. I was 13 at the time. It was the second time in my life where I thought I was going to die, and he was the cause of both of them... The day he was caught I felt a weight lift off my shoulders that I never realized was there because I was carrying it for so long. I have been to every hearing since he was arrested. To me he was a faceless shadow, and I finally had a face to put on it."

DNA from Eyre's case was connected to Burns' other victims thanks to the television show "Cold Justice: Sex Crimes."

Police in Riverdale at one point told Eyre that her rape kit had been lost, she said.

Eyre shared a photo of her family taken months before she was kidnapped and raped.

"I want (Burns) to remember that you told me not to bother to tell anyone, you would never be caught," Eyre said. "I did it anyway because I am stronger than you. It may have taken 28 years, but we are here today. You were wrong."

Eyre shared a photo of her family taken months before she was kidnapped and raped.

Another survivor, who asked for her identity to remain private, addressed Burns directly in court.

For the purposes of this story, we will identify her only as Jane Doe.

"He couldn't stand me wearing anything, not even my socks," the woman said. "He robbed me of my virginity, safety, and sleep since that traumatic night. I have never slept through the night. Ever. Not once for nearly 20 years... The bravest thing I ever did was continuing my life when I wanted to die. He gave me a life sentence, but he himself was free to live his life."

The judge ruled Burns is beyond any sort of "realistic rehabilitation."

Prior to the rapes that took place between 1991 and 2001, Burns had been convicted in 1974 for raping a woman in a McDonalds restroom in North Carolina.

Burns was sentenced to death but later released.

A FOX 13 investigation revealed Burns did not meet the criteria for his sentence to be reduced. For unknown reasons, a judge made an exception for Burns that saved his life.

Attorneys and judges who were involved in the case are now dead.

Burns' sentence was changed to 25-30 years. North Carolina released him on parole after 13 years.

"That was a true miscarriage of justice, because if he had been put to death, how many lives would have been saved from his criminal acts?" survivor Jane Doe said. "I hope he lives to a ripe old age before he dies in prison."

In an exclusive interview with FOX 13, Burns declined to state how many women he has raped in his lifetime.

Ben Willoughby, a prosecutor with the Davis County Attorney's Office, said Burns later admitted the woman in 1974 was his fourth rape victim and that he violated parole by coming to Utah.

"He's now 69 years old and has left only destruction behind him," Willoughby said. "He led a selfish and pointless life."

Willoughby said at least two other survivors wanted to address Burns in court but could not attend due to COVID-19 travel restrictions. In that case, Burns raped a mother and daughter in their own home while forcing the rest of the family to watch.

Burns is also being charged with the 2001 murder of 28-year-old Sue Ellen Gunderson Higgins in Evanston, Wyoming. Her husband was arrested in New Mexico, but charges were eventually dropped as law enforcement realized he was wrongfully accused.

Burns has also confessed to two other homicides, one in Arizona and one in Oregon, although he has not yet been charged.

It's unclear how Burns' sentence in Utah will affect his murder and rape cases in Wyoming.

Burns told FOX 13 he does not want to receive life in prison and that he would prefer the death penalty.