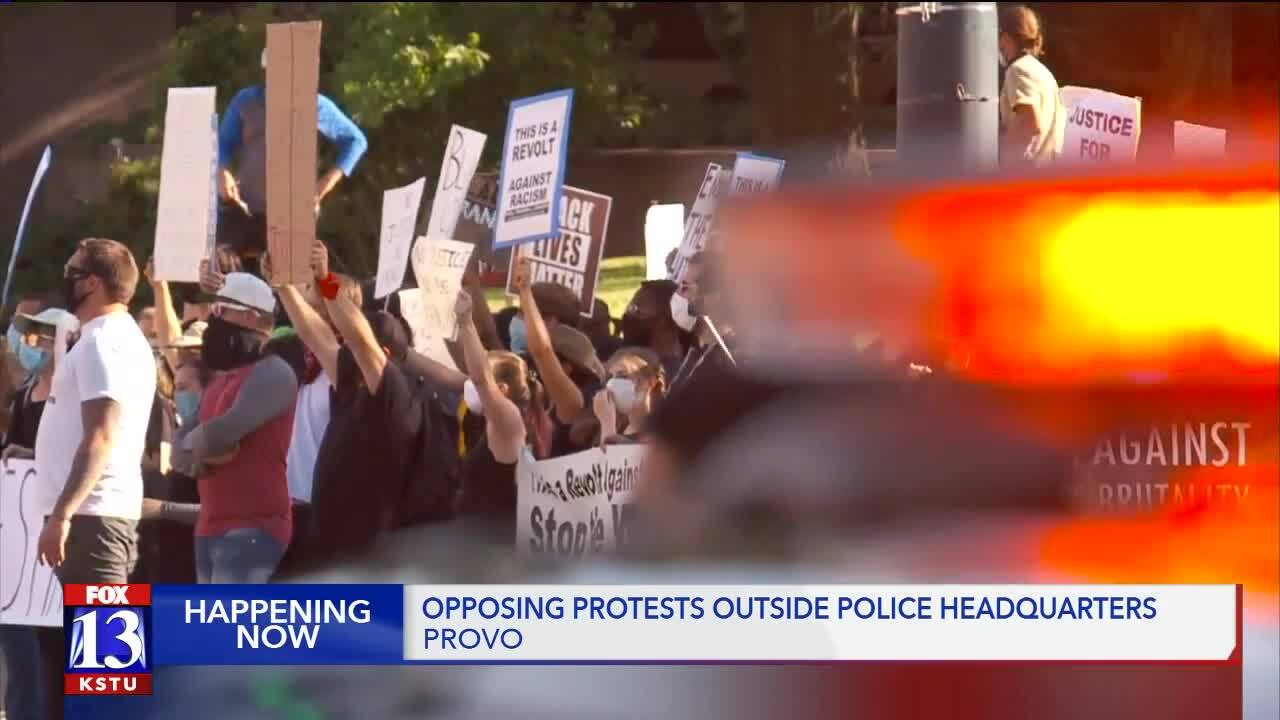 PROVO, Utah — PROVO, Utah-- Two groups of peaceful protesters gathered in downtown Provo Wednesday night-- one to protest police brutality, and the other to protest the protest in light of a recent shooting.

The pair of demonstrations took place two days after Provo Police believe a protester shot a driver in Provo, firing twice when the driver pulled up near the crowd.

Video shows the driver taking off, driving into at least one person following the driver being shot. The driver, police said, will be okay.

Cars drove down Center Street in Provo Wednesday evening, with business as usual. But on each side of the street, groups began to grow on the sidewalk.

On the south side next to the police station, one group chanted, "No justice! No Peace!" and "Not a penny, not a dollar-- We won't pay police to slaughter!"

They held up signs that said, "POLICE REFORM NOW," and "WHITE SUPREMACY IS TERRORISM."

"I can't take my skin off," said Shawn, who is a person of color. "This is something that I have to live with." He said if he doesn't come out here and fight for it, then he doesn't get to talk about how hard his life is. Shawn expressed wanting to make his life and his husband's life better.

The group talked about racial inequality, and called for accountability with police. They said the names of those killed by police officers, and demanded justice.

"We think the whole system is bad," Shawn said. "It's not every individual cop does something wrong, it's that they are part of a flawed system."

On the other side of the street, armed groups stood in silence.

Many held posters or wore T-shirts that said, "Back the blue." A group of men wearing camouflage military-style outfits and gear explained they were from a local club.

Two people held up a banner that said, "TRUMP-- KEEP AMERICA GREAT 2020," and someone else stood with a Gadsden flag, which features a coiled rattlesnake and the phrase, "DON'T TREAD ON ME."

"We're just here to do our part-- with pride," said one man, who identified himself only as "Longman."

He explained wanting to protest the protest because it came close to home being in Provo. He called the events of Monday messed up.

"It's people hating each other," Longman said. "We're not supposed to be that way. We're supposed to love one another and talk it out."

Longman said he wanted to stay peaceful, and support what he believes in.

"That's my opinion and everyone is entitled to their own, just as they are," he said, gesturing to the protesters across the street.

Shawn and Ernest said they wish neither side had violence at all, and that what one person did does not reflect on all of them.

Ernest said he served in the military, similar to many of the counter demonstrators.

"We have a lot more in common than a lot of people want to admit," he said. "But we also have a problem that needs to be fixed."

"The bottom line is, the world doesn't think that all lives matter right now," Shawn said. "And that's what we're trying to rectify."