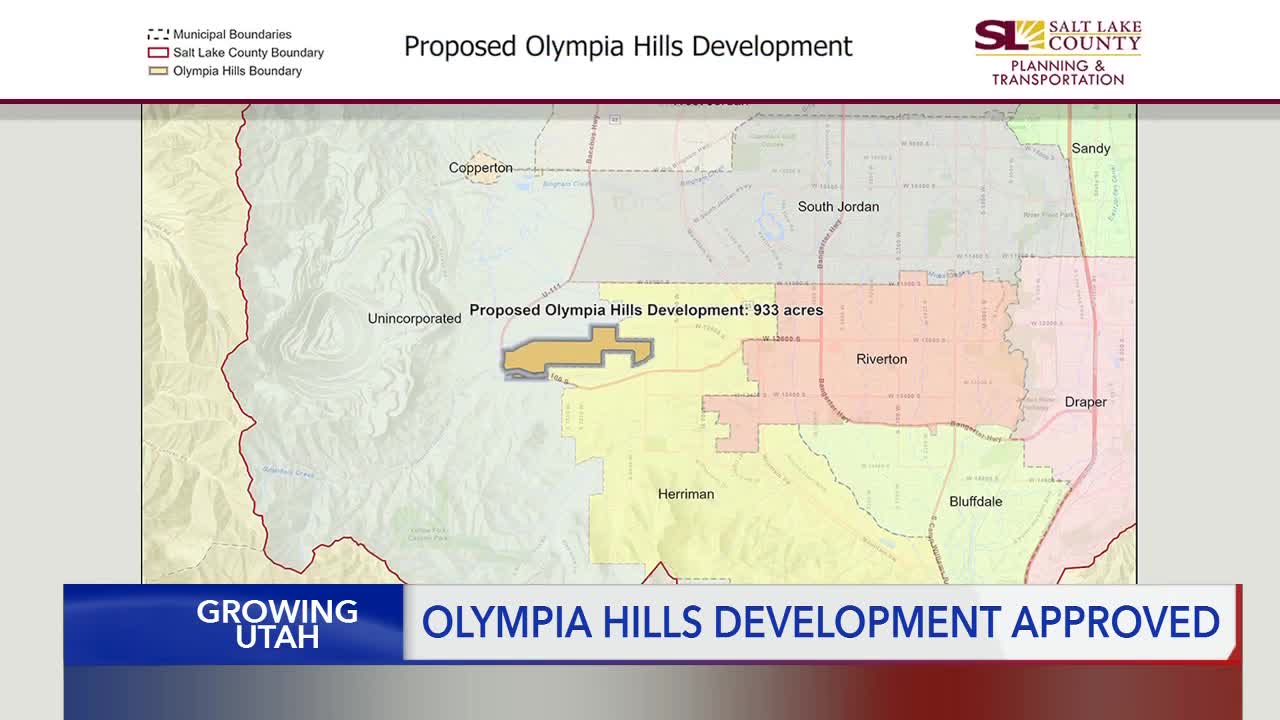 The Salt Lake County Council gave the go ahead to a development that will greatly change how the area looks over the next quarter century. By a vote of 6 to 3, the council approved a rezoning to allow developers to proceed with Olympia Hills.

SALT LAKE CITY — The Salt Lake County Council gave the go ahead to a development that will greatly change how the area looks over the next quarter century.

By a vote of 6 to 3, the council approved a rezoning to allow developers to proceed with Olympia Hills.

The development plans to build roughly 6,000 homes and businesses on more than 900 acres of unincorporated land west of Herriman.

The issue has been hotly debated since the original plan was put before the council in 2018.

The first version of the development plan was vetoed by then-County Mayor Ben McAdams.

Residents of the area have been vocal about having such a large development in their backyards.

“I just wish that you would listen. Thank you,” said one man who addressed the council during another lengthy public comment session.

“This is too big of a project, too fast,” added another resident.

Before the council cast their votes, members explained their decision.

“The way it’s going to impact the citizens of this county is just not right,” said council member Steve DeBry who represents the area where Olympia Hills is planned. “I represent you. I have heard your voice and I am going to be a no vote on this rezone.”

Two others, including Aimee Winder Newton, voiced their concerns with the project.

“It’s unethical to have so much density, so far out,” Winder Newton said. One of her biggest worries was building so many homes away from a major interstate or transportation hub.

Those opinions were the minority. The six members of the council who voted in favor of the development cited the area’s projected growth as a pressing need for a project of this scale.

“I see a planned community as the best and appropriate way to deal with growth,” said council member Jim Bradley.

A second and final vote will be taken at the next meeting of the Salt Lake County Council on March 3.

Residents who expected this result are already organizing for a possible referendum.

“A referendum is an example of poor governing,” one man said to the council.

“Remember, elections are coming and this vote will have consequences,” added another resident.

A representative for the developer said the group is pleased with the vote and optimistic about moving forward.