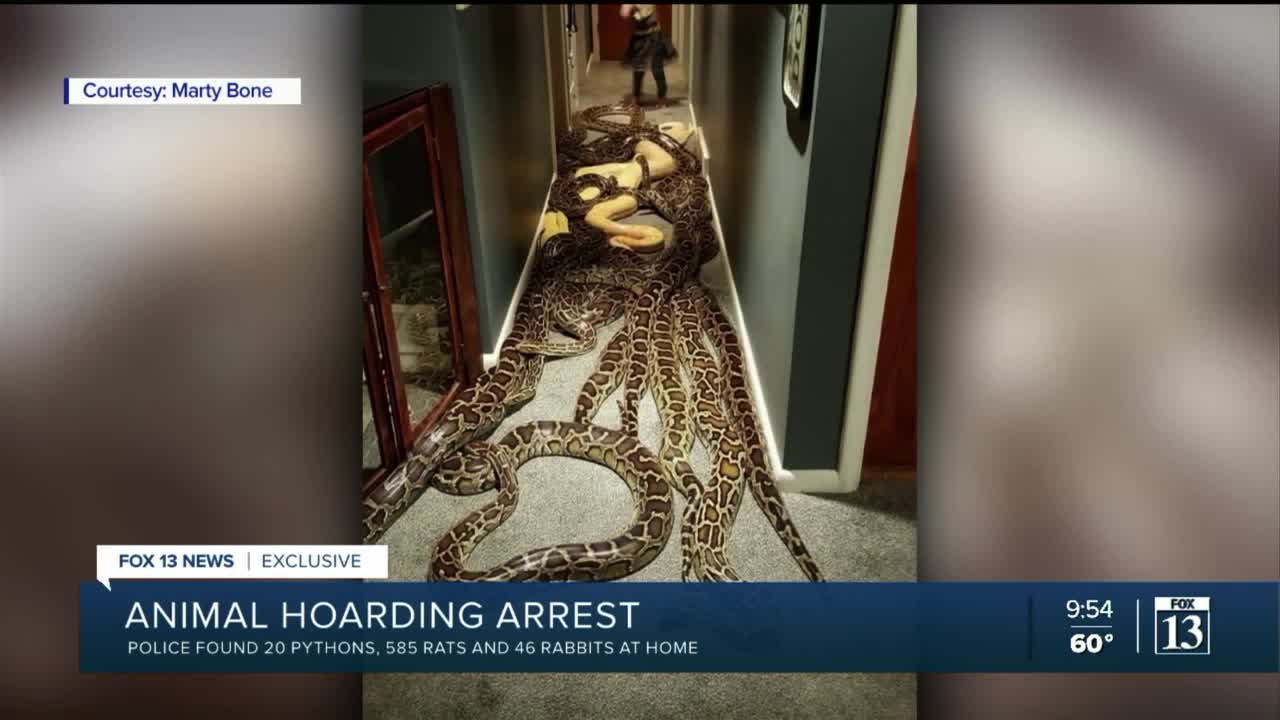 A man was arrested Friday after police say they found 20 pythons in his Holladay home with no exotic animal permit. 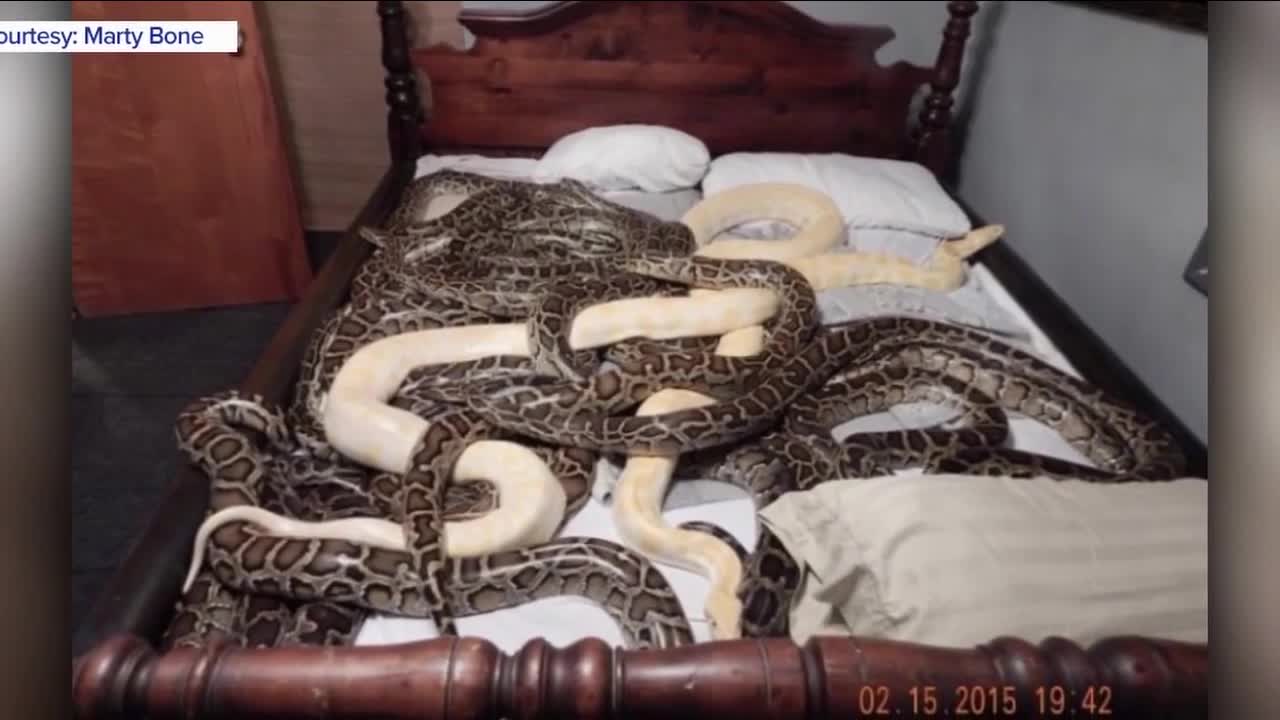 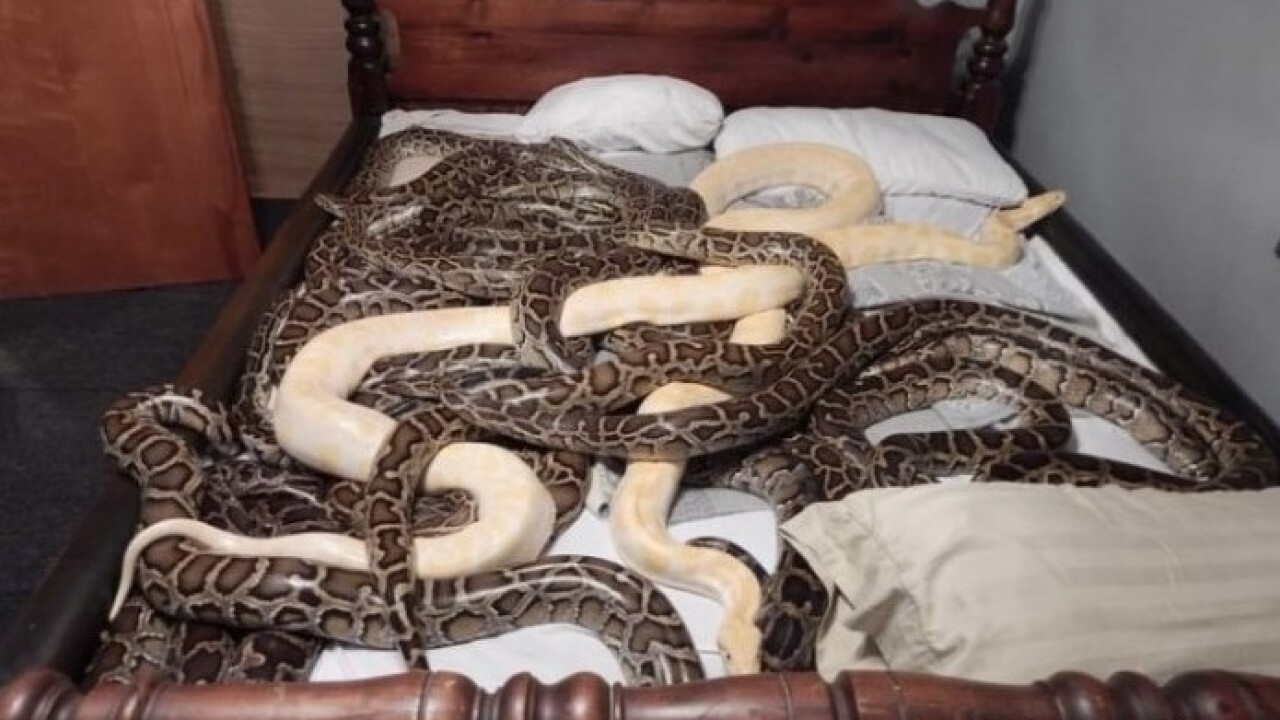 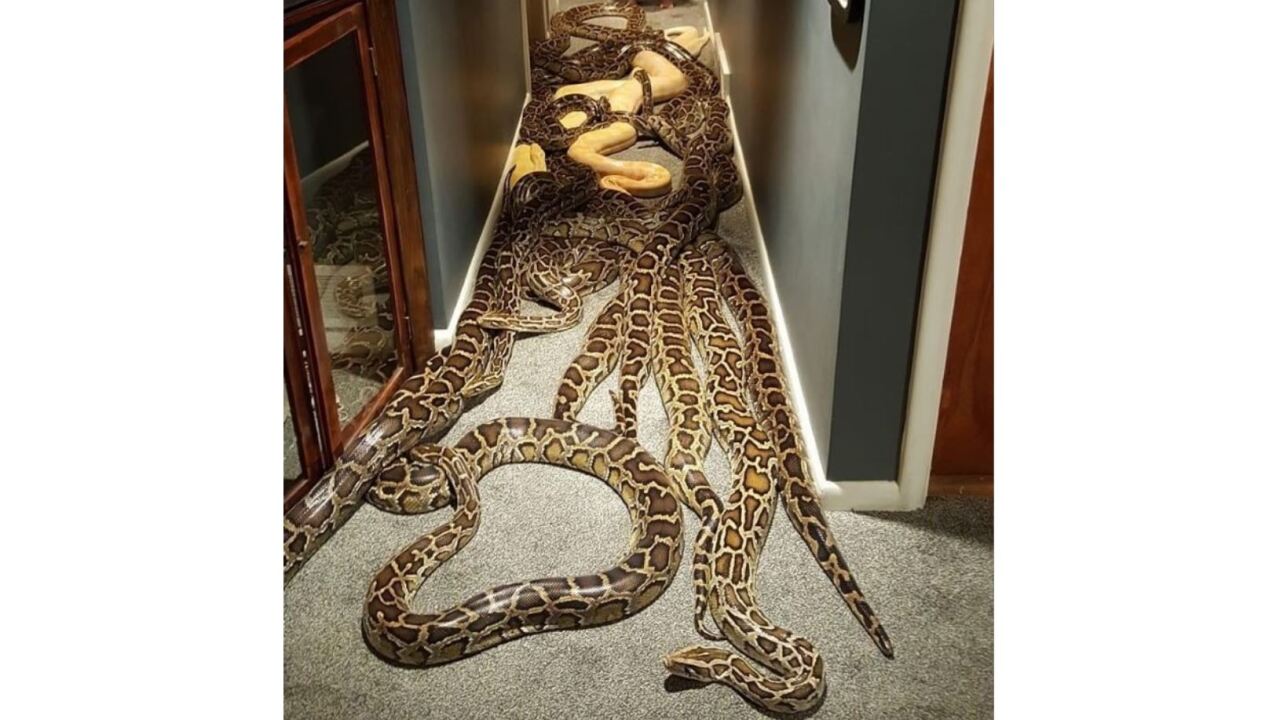 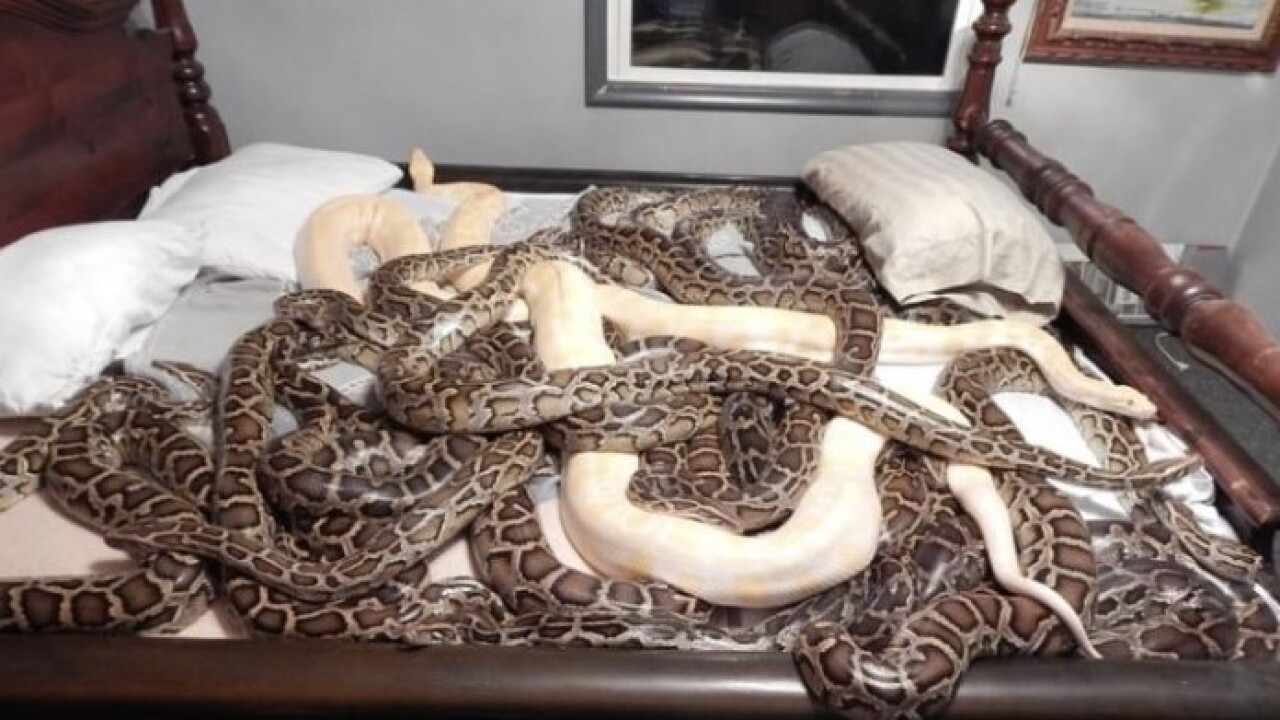 HOLLADAY, Utah — A Holladay man is explaining his distress over the loss of his 20 Burmese pythons after the Unified Police Department arrested him Friday and served a search warrant on his home in an exotic animal bust.

Unified Police said that 64-year-old Marty Lynn Bone didn't have the proper permits to own the snakes, and they also made another discovery in his backyard that they indicated was a potential safety issue for his neighbors.

He said he considers them family. Each one has a name, like Lumpy or Stubbs. He said some are around 15 years old, others up to 30 years old.

Bone lets them roam freely in his home, and they even sleep with him in his bed at night.

"Everything I've done is just for the snakes, not for me," Bone said in an interview with FOX 13 Monday.

Pictures show a pile of snakes stretched down Bone's hallway and sprawled out across his king-size waterbed.

"I've been doing this for 45 years," he said. "Nobody's complained, up until today."

According to the Unified Police Department, they received complaints about Bone that led to an investigation. Detective Ken Hansen said an undercover police officer bought a baby Burmese python from Bone, but Bone didn't have the proper permit to sell the snake.

The probable cause statement said that Bone's exotic pet permit expired in 2017.

This led to a search warrant of Bone's home, which police served to Bone on Friday. Officers said they found 20 pythons throughout the house.

Half of the snakes were more than 10 feet long. Some of the shorter ones were juveniles, Hansen said.

While searching the property, Hansen explained that they also found hundreds of other animals.

There were additional snakes that were dead inside Bone's home, Hansen said.

Bone said he used the rats and rabbits to feed his pythons. He feeds about 18 rabbits once a month to his snakes, he said, and the rats are backup in case he needs more food.

On Monday, rats ran around the floor of the shed where he kept the rat cages. One rat jumped around inside a trap that Bone picked up. He explained that police didn't get all the rats, and some got loose. He's been able to trap a few and put them back in the cages in his shed.

Even if the animals were to be used for food, Hansen described why having a large number is concerning to them. For one, he talked about the odor and waste involved with raising that many animals.

"It's about that situation with that many animals in a residential area," Hansen said. "I think that there's a big concern if those rats got loose, let alone the snakes, especially the size of some of those snakes is pretty big."

Bone told FOX 13 that the free-roaming snakes in his home often breed, and he gives away many of the eggs. For the eggs he keeps, Bone said he later sells the babies. He said many people sell snakes online and at shows without the proper permits.

"They arrest me for selling baby snakes that people sell at the reptile expo," he said.

All of the adult and large snakes belong to Bone, and he said he does not sell them. As far as explaining his expired permit to own the pets, Bone said he didn't realize the permit was no longer valid.

Bone told FOX 13 that he has followed all the rules in the past and used to keep up-to-date on his license, as well as $500,000 insurance on his home. He blamed Salt Lake County Animal Services for what Bone saw as a failure to notify him of the expired permit.

When it comes to neighborhood safety, Bone said that he makes sure to keep his snakes inside. He described a past incident where a python escaped and was loose in the neighborhood for quite some time.

Since then, he said he installed double-screened windows, and self-closing doors as well as separate self-closing screen doors in front of the doors on his house.

"I accept living with them, no matter what the danger is," he said.

With the snakes now taken away and Bone unable to buy more snakes in the future, he described how he felt like he lost his family.

Bone was booked on 20 counts of "permit required for exotic animals," 10 of which are Class-B misdemeanors and 10 Class-C. He was released from jail over the weekend.

He also faces charges of possessing controlled substances with intent to distribute and possessing a firearm by a restricted person after police say they also found marijuana, opiate-derivative pills and a gun in plain sight while searching his home.

SNAKE SEIZURE: UPD removed 20 pythons from a Holladay home, but the man who lives there tells me this is his life and these Burms (Burmese pythons) are his kids. Tonight @ 9, he explains how much he loves these snakes, but why @UPDSL says owning them was illegal. @fox13 pic.twitter.com/EjyW1GTKNN