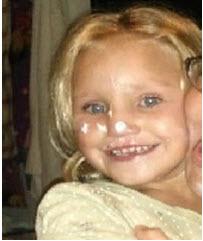 According to the Center for Missing and Exploited Children, Rebecca went missing Saturday in Lakeland Florida in the area the 6200th Block of Highway 98.

WTVT in Florida reports that deputies believe West Hogs is a family friend from the Alabama area. The man legally changed his name to West Wild Hogs from Matthew Clark Pybus several years ago.

The girl is pictured above and was last seen wearing a pair of blue shorts. She stands 3-feet tall and weighs 30 pounds, and she has blue eyes and blonde hair.

Rebecca may be with West Hogs, who is also pictured above and is described as having a scar shaped like the letter “L” on the left side of his head. He has a tattoo of a blue cross and another with a Chinese symbol.

The two may be in a silver 2012 Nissan Versa with an Alabama handicap license plate, No. 4JL26. WTVT reports that vehicle was reported stolen in Alabama.