Explaining all the amendments on Utah's Election Day ballot 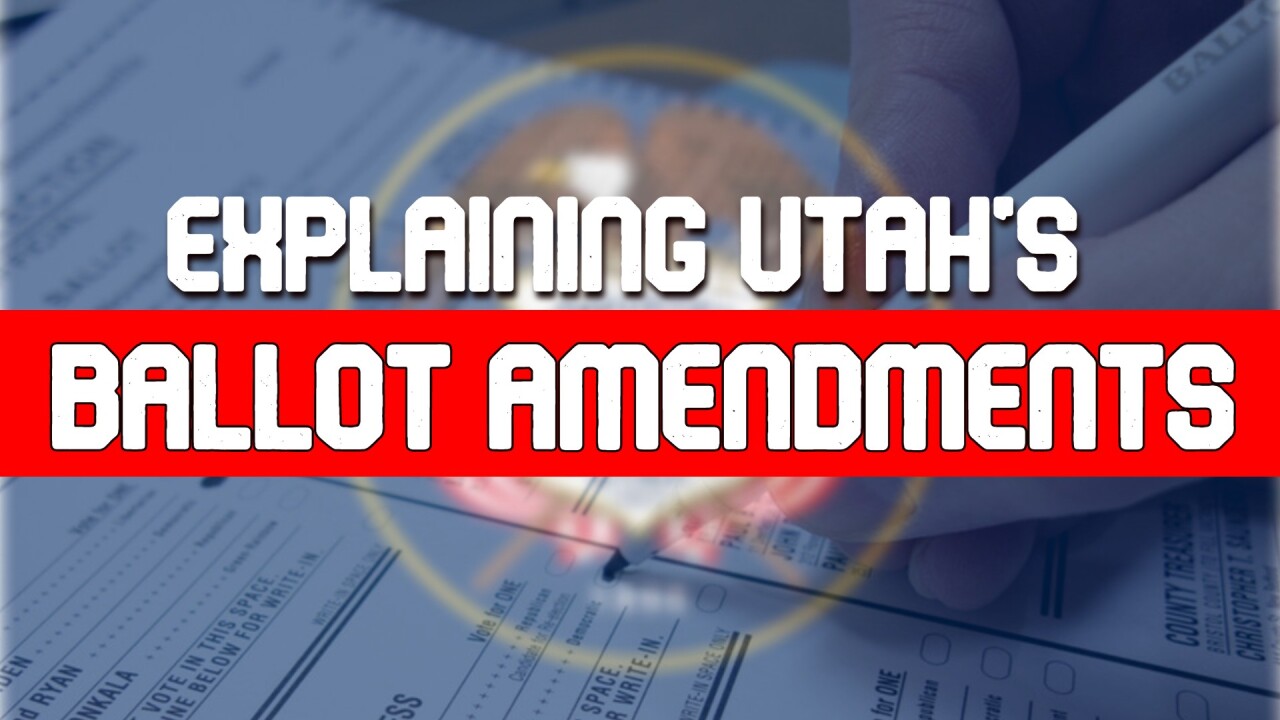 SALT LAKE CITY — On top of the individuals Utah voters will be electing to office on Nov. 3, there are a handful of amendments Utahns will need to be aware of before sending in their ballots or heading to the polls.

There will be 7 amendments for voters to choose "FOR" or "AGAINST" on the ballot this year.

Here are brief explanations on all the amendments:

This amendment will remove gender-specific language in Utah's state constitution and replace it with gender-neutral language. A fiscal assessment of the amendment shows it would have no monetary effect or cost to the state.

Shall the Utah Constitution be amended to specify that certain requirements that a person must meet to be eligible for the office of senator or representative in the Utah Legislature apply at the time the person is elected or appointed?

Amendment B aims to clarify language on when qualifications for candidates running for office are met. The amendment would require candidates to be a U.S. citizen, be at least 25-years-old and a qualified voter in the district they're running in by the time they are appointed or elected.

Currently, Utah's constitution bans slavery, but technically allows slavery or involuntary servitude to be used as punishment for a crime in which someone has been convicted. This amendment would disallow that exception.

This amendment has to do with the water rights of municipalities. A vote "FOR" for Amendment D would allow a municipality to define the boundary of its water service area and to set the terms of water service for the area, including service charges.

If the amendment passes, municipalities will still not be allowed to sell or dispose of its water rights or sources of water supply.

Shall the Utah Constitution be amended to: • preserve the individual right to hunt and to fish, including the right to use traditional hunting and fishing methods subject to certain regulation; and • establish public hunting and fishing as the preferred way of managing and controlling wildlife?

Hunting and fishing in Utah is wrapped up in this amendment as it would guarantee state residents their constitutional right to hunt and fish.

This amendment would allow the state legislature to change the start date of its meetings from the fourth Monday in January to any day in the month.

Shall the Utah Constitution be amended to expand the uses of money the state receives from income taxes and intangible property taxes to include supporting children and supporting people with a disability?

Amendment G will expand the way Utah spends its income tax revenue by allowing tax funds to be used for supporting children and supporting people with a disability. If the amendment passes, a rainy-day fund would be created to help maintain education funding when income tax dollars decline. Those against the amendment worry that taking money away from education would hurt Utah families.