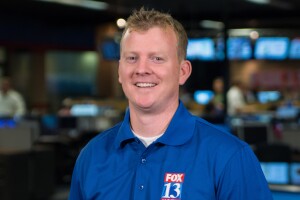 Morgan Vance is a Sports Anchor/Reporter and returns to the bumbl’n Beehive State where he went to school at UVU. Stops in Joplin, Mo and the Tri-Cities, WA followed before the opportunity arose to jump back into the middle of the Cougars-Ute’s ruckus.

In Orem, he got his start calling TV play-by-play for the Wolverines as they made the historic leap from Junior College affiliation to Division I. Ronnie Price finished 3rd in the country in scoring as a senior , and Morgan co-produced and narrated an award winning documentary about the future NBA player, titled, “Priceless.”

His favorite things do go like this… Spending time with his wife and 3 little girls, a day on the golf course (no matter how high his handicap may be), watching the show “24”, and anything 80’s. Morgan welcomes any and all story ideas. You can reach him at morgan.vance@fox13now.com and on Twitter at movance13.