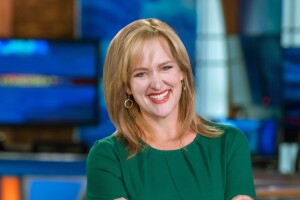 Amy Nay anchors Good Day Utah Weekend each Saturday and Sunday morning on Fox 13 from 6:30-9AM. She also fills in on the desk and out in the field for Fox 13 News, where she’s been proud to be a part of the team.

Amy has been in the television news business for 25 years. She started her career while in college at Southern Utah University, with SUUTV and at CTV-12. She then moved to New York City the day after she graduated to pursue her dreams. Amy worked behind the scenes as a writer and producer at CNN, NBC, and Fox News Channel where she met her husband while the two were playing softball on the company’s coed team in Central Park. Amy worked in radio news initially as a service aide working her way up to an anchor and field reporter. Her reports were heard daily on thousands of stations across the country and around the world, especially when the events of 9/11 transpired. Amy jumped at the opportunity in the big city. She was a writer and then reporter at WPIX-11 and then spent 8 years as a morning news anchor at News 12. She and her husband had two sons in New York and then moved to Utah where they had two more. You may have seen her on Channel 2 where she worked as the weekend anchor for 6 years. She also traveled the state reporting, meeting people in their communities and helping tell their important stories.

Amy is originally from Utah, growing up in the small, tight knit community of Gunnison. After spending many years away, she is grateful to be back in Utah, allowing her to raise her boys surrounded by the people and places that are so important to her.

Amy has been honored to receive an Emmy for her work as an Anchor/Reporter here in Salt Lake City, a Gracie award for Best Host in a Top 25 market when she hosted a daytime show in New York, multiple Telly awards and UBEE awards, among others.

She loves to be able to give back and help with a number of charity events throughout the state and always considers it a great honor to be asked to host and MC various fundraisers and other special events. She also enjoys being able to speak to many different groups, often about the work/life balance that so many of us face. Amy also has been honored to sing the national anthem at a number of local events and is always proud to be able to do that.